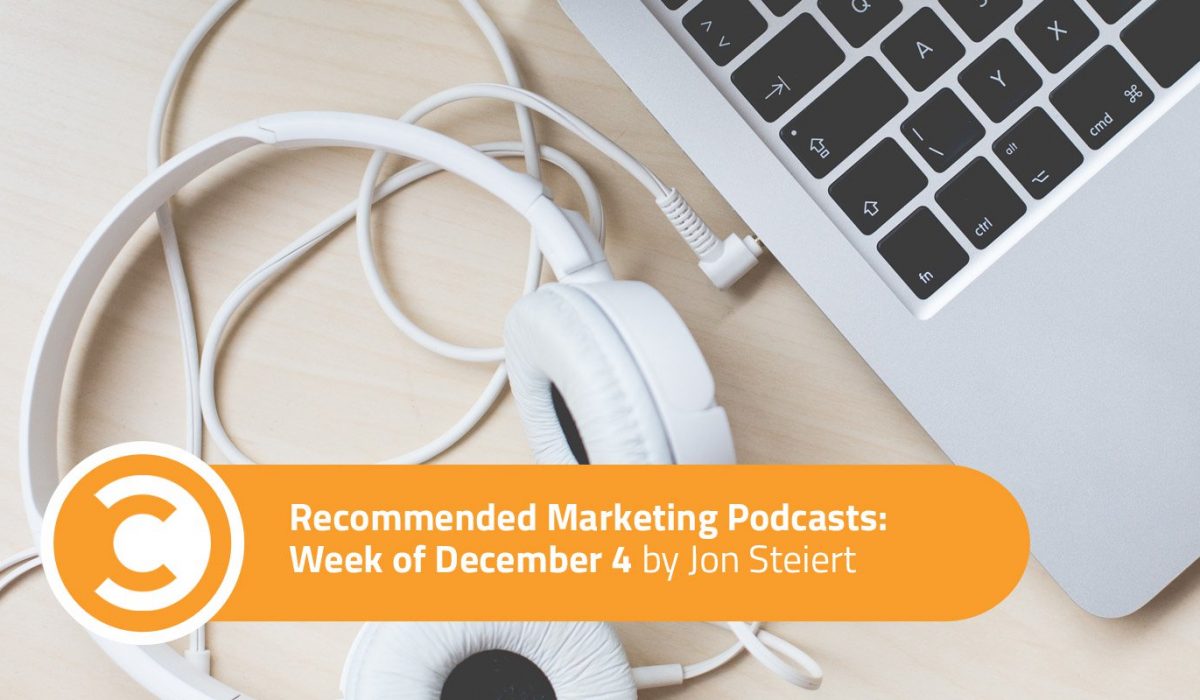 Podcasts are a great way to educate yourself. Whether you’re on the train, in the car, at your desk, or anywhere in between, this medium is an incredible vehicle for supplementing your industry knowledge. Every week, I’ll be sharing with you some of the best marketing podcasts around, spanning the whole marketing landscape.

Whether you’re new to podcasts or you’re a seasoned listener, you’ll find value in each weekly round-up. Let’s get listening, shall we? Social Pros #297: How Cleveland Indians Fire Up Their Fans with Social

For us baseball fans, the season can either be too long or too short, depending on the quality of our favorite team’s play. For Joel Hammond, Assistant Director of Communications and Head of Social Media for the Cleveland Indians, 162 games (plus Spring Training and Postseason matchups) is a rewarding but exhausting grind.

In this episode of Convince & Convert’s flagship podcast, hosts Jay Baer and Adam Brown (Executive Strategist, Salesforce Marketing Cloud) talk with Joel about how the recent success of the Cleveland franchise has lead to championship-level social media execution and engagement.

Takeaway: While the baseball team might have a 25-man roster, Joel is a one-man band with a platoon of interns. Together, the Indians have shown us all that social success doesn’t mean you need massive teams and gigantic budgets, though they can’t hurt.

Thanks to their unwavering focus on fan experience, the Indians are number one in all of Major League Baseball, in social media engagement and interaction rate. Since American pro sports franchises have so much attention placed on them, given the passion and connection fans feel towards the team, Joel’s quote below makes even more sense from a social strategy perspective:

READ ALSO  The Best Public Market in Every State

Joel talks further about UGC, organic social, and creating original content across platforms. It’s a master class in Getting Stuff Done and maximizing the resources at your disposal. Masters of Scale Episode 3: Learn From Every ‘No’

Tristan Walker is the CEO of Bevel. He also might be the most persistent start-up applicant ever. (He’s a former employee of both Twitter and Foursquare, back in their early days.)

Host and LinkedIn founder Reid Hoffman brings us the stories of entrepreneurs finding opportunities to showcase their abilities and how they kept moving forward with their ideas, dreams, and visions.

Tristan, like the others in this excellent episode, was told “no” over and over again. Hearing “no” is never fun, but instead of letting it defeat and define them, these entrepreneurs readjusted and reconfigured their approach until they got the answers they were seeking—be it from someone else or themselves.

Takeaways: When I was a freshman in college, my second semester English teacher told my class that we were lucky—lucky because, at age 19, we hadn’t been told “no” very much in our lives. At the time, I thought he was right, and in a sense, he certainly is. But in the world of business, hearing “no” just means you’re getting closer to your next “yes.”

Tom Webster and Chris Brogan often talk about pivoting too late and how it can be okay to quit. But there is certainly something admirable and inspiring about the kinds of people who don’t take “no” for an answer. In the face of opposition, they simply smile, say “okay,” and keep looking for a way to find their “yes.” Facebook Advertising is one of the most effective tactics you can add to your marketing toolbelt without breaking the bank. (Location and interest data from two billion users will do that.)

In this episode of the consistently actionable Social Media Marketing Podcast, host Michael Stelzner invites The Ad Strategist herself, Amanda Bond, to walk us through the best ways to leverage owned data.

Takeaways: The ability to segment on Facebook is nearly endless. You can slice and dice your audience by who interacts with a certain post, which actions they take, and even how long they engage. As we do with email funnels, marketers can use any of Facebook’s tools to create their own version of Facebook Funnels directly within the platform.

One cool thing Amanda shares is her approach to increasing page engagement—something she calls “engagement looping.” Whenever a user shares your content organically, head over to their profile (or business page) and say thanks! After thanking them, Amanda recommends leaving a fun string of emojis, if and when appropriate. Finally, ask a question that will sway them to come back and engage some more with you. Done right, it’s more than enough to show them you appreciate your audience.

That’s all for this edition! I’ll be back with a new batch next week. In the meantime, share any podcasts you think I should know about with me @jwsteiert on Twitter or in the comments below!