You’re running campaigns as usual. Good ones, campaigns that have succeeded in the past. Some might have even returned best-in-class results. All of a sudden, though, the cost of those same strategies and campaign structures increased in October, and your November numbers are even higher.

It’s important to note that you’re (probably) not doing anything wrong – the consistent rise in social advertising costs has been well-documented in recent months.

BuzzSumo, AdStage, and others have outlined how the number of advertisers migrating to social is creating a more saturated market space.

So, how do you sell this up the ladder when presenting this information, especially when experiencing such an abrupt change?

At risk of oversimplifying, let’s say social platforms dedicate two in 10 posts within a feed to advertisements or promoted posts – however, there are 10 advertisers competing for those two spaces.

Think about a housing development with 15 lots – each lot is listed at a given price, and let’s say the development receives 30 bids to own those 15 lots. Does management try to squeeze all 30 suitors into that one development, compromising the value of each plot?

Of course not. The property management likely lets the suitors bid against one another until only 15 qualified bidders remain, protecting the integrity and infrastructure of the soon-to-be neighborhood.

That’s what happens on social media. The number of competing brands is continually increasing, leading to an increase in advertisements – however, the number of available ad spaces remains relatively consistent. To avoid polluting the user experience with ads, and driving away users, platforms allow brands to compete for the space.

READ ALSO  Here's How Your Brand Should Innovate for Gen Z

In most cases, social advertising is built on an auction-based system – that means the more you’re willing to pay to get in front of your target consumer, the better your chances are of appearing in front of said consumer.

However, you’re competing against every other brand on the planet who wants to appear in front of that same person, using that same slot in the feed. The more brands are competing to reach the same consumer, the higher the price of appearing in that consumer’s feed.

This drop in performance and rise in cost is a result of market saturation. Every year, particularly during the holidays, advertisers flock to social media, creating a surplus of ads with a shortage of space, making each slot more valuable in turn.

It’s simple supply and demand at work – if the supply stays the same, but the demand increases, the price also increases. 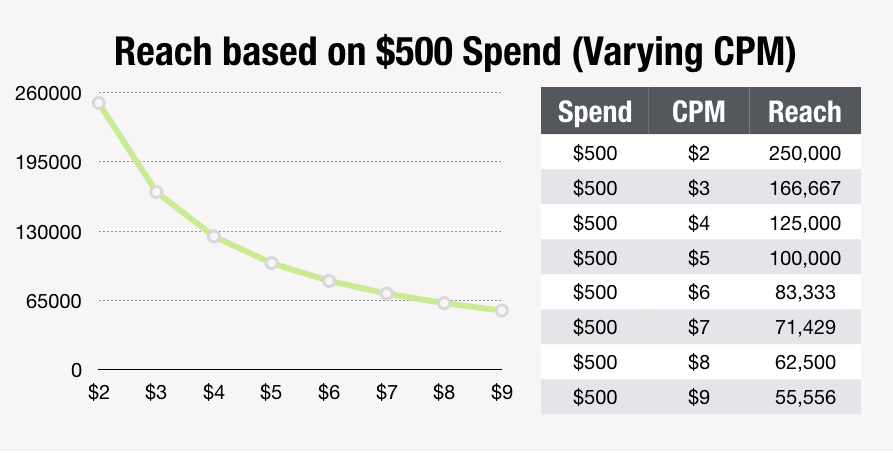 How does this affect your monthly reports? Consider this chart – the spend ($500) remains consistent, but as CPM increases dollar-by-dollar, the resulting reach decreases. A simple two-dollar rise in CPM could mean the difference in reaching 125,000 consumers or simply 83,000. It can be difficult to explain a sudden 34% drop in reach from the same ad strategies and funnels that were thriving just two months ago.

Over the past couple weeks, North America went through the largest shopping week of the year – Black Friday and Cyber Monday came and went. New products were launched, old products tested their mettle against the cutting edge. Everything went on sale. Every consumer needed to be reached to generate buzz and get the word out on brand new products that may or may not “change the game” this holiday season.

And that was just the week-of – brands spend weeks (months for some) preparing fans for sales and discounts, generating awareness for the can’t-miss deals and must-have gifts of the season. Over the past couple months, social advertising has experienced a snowball effect, building momentum and continually growing more competitive heading into the holiday season.

Not only this, but the 2017 calendar year is winding down. That means brands and marketers are clearing budgets, upping their advertising spend to close out the year and ensure their budget doesn’t drop in 2018. That means there are more dollars in the space to compete against your ads, and more ads to compete for your consumers’ attention, all while the number of slots and consumers holds consistent.

All this comes together to create an oversaturated, hyper-competitive market space where elevated CPMs and CPEs are the norm.

You and your brand aren’t alone. So, don’t panic, and don’t blame the social platforms (this time).