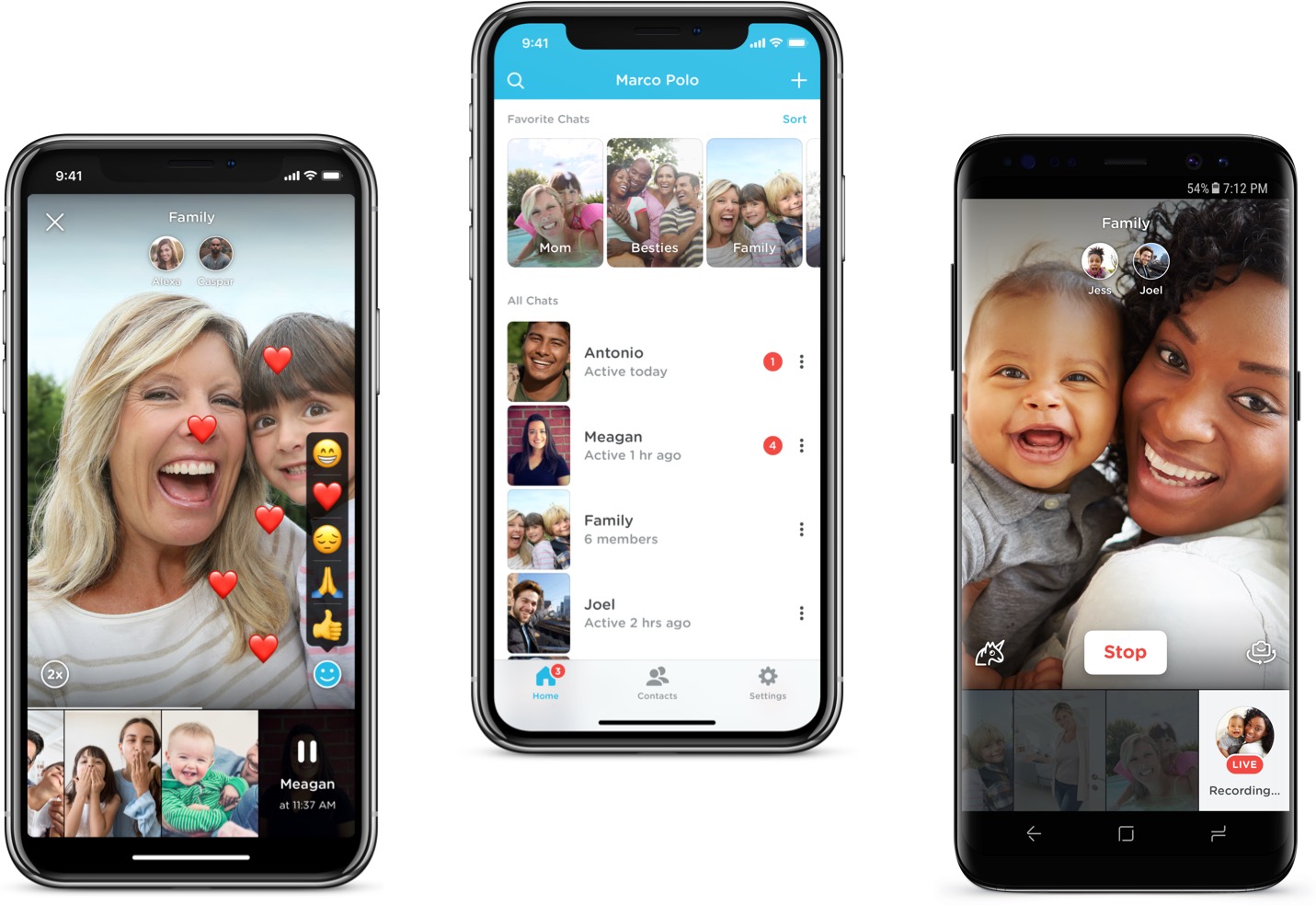 In a world of endless social media platforms, how does a video chat app stand out? Skip the gimmicks and focus on the technology to ensure authentic, real-time reactions.

After years of mobile app launches, Joya Communications Inc. hit the mark with its flagship app, Marco Polo, a video chat app that lets you record messages to be watched in real time or at one’s convenience. With just a handful of minimal image- and voice-augmenting features, the interface is devoid of animated overlays, remaining uncluttered and intuitive enough for my toddler.

“There are plenty of apps to keep in touch, but those are mostly about optimizing for the quantity of relationships, not the quality,” said Joya co-founder Vlada Bortnik. “When people get Marco Polo and see what’s possible, there’s an emotional light bulb of being able to connect in a way that’s real, not a highlights reel,” he added in a reference to the algorithm-driven standard for curating what users get to see in their news feeds on popular apps, such as Instagram and Facebook, and even Snapchat, for a time.

Translation: Marco Polo is “real” because its private, focusing on one-to-one video conversations or private groups. It’s built for candid colloquy between familiar faces, stripped down to the necessities of genuine exchanges instead of filter-fueled clickbait. There’s even a “mom-mode,” where busy users can breeze through rambling video messages at double speed. If only that were a feature in real life.

With a founding team of two engineers, Vlada and her husband Michal, Marco Polo has been an exercise in faith for the creators and investors. Launched three years ago and now in its ninth iteration, Marco Polo has reaped the benefits of $25 million in funding. The lengthy incubation period has enabled Bortnik to focus company resources on the app’s underlying technology for uninterrupted video exchanges. Now surpassing 1.3 million iOS users, Marco Polo’s organic growth has brought Bortnik to the inevitable junction of scaling her business, from code to compensation.

Scaling video chat at the edge

In the cloud era, scaling a tech business has its share of challenges and perks. Marco Polo’s first challenge was merely building the application, as typical video communication services provide primarily synchronous video file exchanges. Marco Polo’s ability to watch video live or at a later time is tech the team built in-house.

“There wasn’t anything we could buy off the shelf,” said Bortnik, noting that at the time, building such tech was quite difficult but a game-changing necessity for the current success of the app.

Of the cloud’s many perks is cheaper data, as virtualized infrastructure trends drive down overhead for cloud-native startups. “When we first started, data was super expensive. Over the years, it’s gotten cheaper and cheaper and cheaper. So being able to connect [users] outside of Wi-Fi is becoming more possible,” said Bortnik.

Cheaper data made it easier for Marco Polo to enter the race, but the gates have been opened for all players in the market. That makes it particularly important for Marco Polo to differentiate through its software while taking advantage of ready-to-scale cloud computing.

Through software, Bortnik takes on the challenge of optimizing connectivity to ensure Marco Polo works well even when cellular or Wi-Fi signals are poor, and “especially for those sensitive to data usage,” said Bortnik. “That involves a lot of tricky moves — doing things that are absolutely needed to get the Marco Polo [message] across.”

One trick is to detect when an end-user is on Wi-Fi so, when possible, Marco Polo can download video messages ahead of time to reduce playback friction. “In terms of low connectivity, we have to build for that and figure out if there’s a delay from the sender to the receiver and say the detection is bad,” said Bortnik.

As video messages, called polos, are also retained on their servers, Marco Polo constantly clears up storage on user devices. “We’re smart about knowing when you’ve watched a polo and cleaning it up,” said Bortnik.

With the core technology now well established, Marco Polo must answer the question — to advertise or not to advertise. For now, two sizable funding rounds have allowed Marco Polo to focus on its product and worry less about monetization. Marco Polo’s growth, according to Bortnik, has been organic through word-of-mouth sharing. Only now has the company begun exploring traditional marketing techniques and potential monetization strategies.

“Monetization is crucial because I want to work on [Marco Polo] for a really long time, and it needs to be sustainable,” said Bortnik. “We are starting to think about monetization, and we’ll have more on that this year. It will be aligned with our brand value of trust.”

There’s much to consider when it comes to monetization. There’s always the chance it could halt the organic appeal that’s worked so well for Marco Polo. Reigning video chat platform Snapchat serves as a stinging reminder of advertising gone awry, as monetizing its 190 million daily active users remains a challenge and the company still operates at a loss.

It’s not just Snapchat that has hit snags in monetization initiatives. SMS chat platform WhatsApp eventually had to drop its subscription-based model and even experimented with selective correspondence services for sponsor businesses. The tension over monetization strategies ultimately caused WhatsApp creators to part ways with Facebook, which had acquired the chat app in 2014.

In the digitization era, however, data is proving an essential asset for social apps tapped into behavioral patterns of population subsets and could provide alternative monetization options in lieu of advertising, subscriptions, and in-app purchases. Because Marco Polo began as a way to connect on a highly personal level, privacy plays the dual role of being a selling point for the app and an obstacle on the road to monetization.

“There is a space for group and family video that has not been tapped into, so there is a value proposition for Marco Polo,” said Holger Mueller, principal analyst and vice president at Constellation Research Inc. “The question is, how much is it worth for consumers?”

Despite the roadblocks, advertising remains the most successful model for social media platforms, and deviations for subscription or usage-based models rarely gain widespread acceptance from consumers. Marco Polo’s lengthy incubation period grants the startup time to examine its user base and test the monetization waters, seeking validation through niche markets.