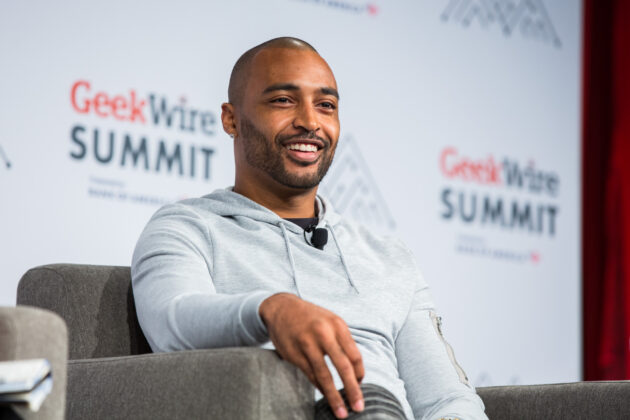 “As a kid, I grew up playing with legos… I would create whatever I wanted to create. And Intellectual Ventures gives me the ability to do that again,” Baldwin said during an interview at the 2019 GeekWire Summit. Baldwin officially ended his 8-year career with the Seattle Seahawks earlier this year.

We’re lucky to have @DougBaldwinJr join our team and bring his passion to help people and knowledge of emerging tech to push innovation forward and help us solve some of society’s biggest tech challenges #GWSummit https://t.co/z1uessXbrL

— Jeff Harrell signed on as vice president of marketing at Adaptiva, a provider of endpoint management and security solutions. Harrell was formerly a marketing executive at encryption software firm Zettaset and project management software provider Redbooth, which merged with AeroFS.

“I’ve admired Adaptiva’s ability to bring truly innovative solutions to market that solve some of the most pressing yet often overlooked issues enterprises face today,” Harrell said in a statement.

— Dona Sarkar is leaving her role as leader of the Windows Insider Program to join another group at Microsoft. Sarkar signed on with the Microsoft Developer Relations team, where she will advocate for citizen developers.

1/ After 3+ years of leading the #WindowsInsiders program, I’ll be moving over to the MS Developer Relations @azureadvocates team to lead advocacy for Power Platform + tech skilling.

— Event technology company Eventcore snagged April Halm to be its compliance and data privacy manager. She formerly worked in senior compliance roles at AT&T and founded PrivaC, a consulting company.

“In today’s fast-evolving threat landscape, it is imperative for all companies to have a robust incident response contingency plan that can be set in motion at any time, and I’m proud to begin leading in this area for eventcore,” said Halm. “I am confident that eventcore’s client information will be protected at all times, in any given situation, so that we can continue on as the premier technology solution for event registration.”

— Anne Greenwood joined the advisory board of Syndio, which operates a platform to help companies eliminate pay disparities. Greenwood runs her own consulting business and is a longtime financial executive, serving in senior roles at Citi, Morgan Stanley and Smith Barney.

Costa de Beauregard and his wife Helene are also behind an effort to create a Nobel Prize for climate change.

“Environmental issues are very important to my family and I. We try to do as best as we can in our personal lives to limit our impact and consumption, and now I wanted to find a place where these values were also part of my work,” Costa de Beauregard said in a statement.

San Francisco-based Brightloom, which is led by former Starbucks digital officer Adam Brotman, earlier this year inked a partnership with the coffee powerhouse.

— Rodrigo Lopez is the new head of the Washington state region at Comcast, where he has worked for 26 years.

— Detroit startup Bloomscape, which sells houseplants online, hired Aaron Averbuch as chief technology officer. Averbuch was formerly an engineering leader at Seattle-based Placed, which was acquired by Snap in 2017.

“Throughout my career, I’ve seen a number of roadblocks that prevent highly qualified women from climbing the corporate ladder,” Greenwood said in a statement. “After working with some of the largest financial services companies in the world, I’ve made it my mission to help women advance in these male-dominated environments.”