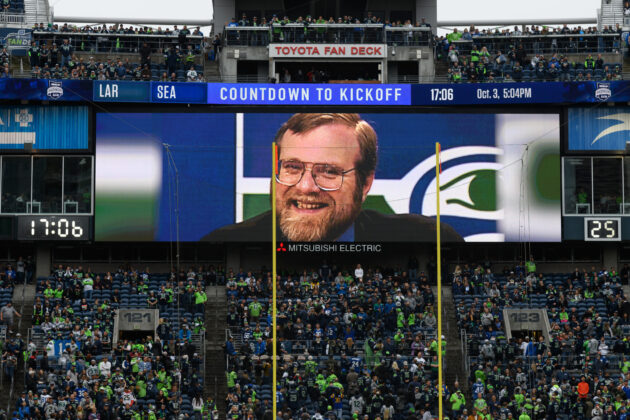 Patti Hammond — better known around these parts as “Mama Blue” — knows how much Paul Allen meant to the Seattle Seahawks.

A diehard fan since the team entered the NFL in 1976, Hammond has been a regular at home games for 43 years. She was at her front row seat again on Thursday before Seattle’s bout against Los Angeles, donning her feathers, necklaces, and blue-and-green glasses.

But this time Mama Blue brought along a special item, holding it up with two hands so everyone could see: a photo of her and the late Allen, celebrating together at the Experience Museum Project after the team’s Super Bowl win in 2013.

“We have to thank him for the fact that we’re still here,” Hammond said. “He was the most gracious person. He was just into keeping things in Seattle that needed to be here.”

Seahawks quarterback Russell Wilson was equally effusive about the man who brought him to Seattle. Following a dramatic 30-29 victory, an emotional Wilson told Fox on the field after the game that he had to thank Allen for the opportunity to play for the Seahawks.

“He gave me an opportunity… Paul was here tonight.”

An emotional @DangeRussWilson reacts after the @Seahawks‘ dramatic win on the night that the late Paul Allen was honored. pic.twitter.com/XAJRKOnPEs

For giving us a chance.
For making a difference.
We did this for Paul. @DangeRussWilson x @Bose pic.twitter.com/3vQn3J9oHY

The late Allen, who passed away last year at the age of 65, was honored at CenturyLink Field on Thursday as he became the 12th member to join the Ring of Honor, a distinguished group of people who made significant contributions to the franchise.

Allen purchased the Seahawks in 1996, effectively saving the team from leaving town. The Microsoft co-founder and Seattle native owned the franchise for more than 20 years, guiding the Seahawks during their most successful stretch in team history, winning three NFC championship trophies and bringing home the Lombardi Trophy as Super Bowl champs in 2013.

After epic tribute video about Paul Allen highlighting the greatest Seahawks moments from the past two decades and his impact on Seattle…his name is officially unveiled as part of the Ring of Honor. pic.twitter.com/cNGCdCqEcj

Other members of the Ring of Honor and family members joined an on-field ceremony before the game. Fans had a chance to watch a tribute video before Allen’s name was revealed in the rafters.

“His name will shine under the lights tonight, and his legacy will live on forever,” said Steve Raible, the former Seahawks receiver and current radio commentator who MC’d the ceremony.

Allen’s sister, Jody Allen, took over the team after her brother passed away. She was on hand Thursday, helping raise the 12th Man flag with a roaring crowd inside CenturyLink Field — a stadium that wouldn’t exist without Paul Allen.

The emotional tribute video, narrated by former Seahawks fullback Mack Brown, highlighted the team’s epic moments under Allen’s leadership and saluted his impact on the franchise — and city.

“Behind the parades, the wins, the losses; behind the feeling of this city on Blue Friday; behind the stadium we call the home of the 12s; behind the existence of this team in Seattle at all … is that kid from Ravenna,” Brown says toward the end of the video.

“Say what you want want about fate, destiny, fortune — but that kid gave a lot to this city. And we were lucky to have him.”

Walter Jones, a Ring of Honor member and former Seahawks offensive lineman who played all 13 seasons with Seattle, told GeekWire afterward that the ceremony was “amazing to be a part of.”

“You hate the fact that he’s not here to see this, but the video was self-explanatory,” Jones said. “The things he’s done for the city … I’m totally honored to be apart of the Ring of Honor with him.”

It’s somewhat fitting that Allen is the 12th to join the group, given the importance of that number to the team, and Allen’s influence over the years.

“He was the proudest 12 of all,” Jody Allen said in a statement.

Earlier this week, Seahawks quarterback Russell Wilson was asked about Allen’s impact on the franchise.

Seahawks head coach Pete Carroll noted Allen’s influence on his own decision to take the job in Seattle nine years ago.

Allen, who attended most Seahawks games both home and away, bought the team for $200 million in 1996. As he wrote in his autobiography Idea Man, Allen purchased the Seahawks less so as a way to make money and more out of “allegiance to the city,” Q13 reported.

Allen, who helped launch Microsoft in 1975 with fellow Lakeside School graduate Bill Gates, wasn’t actively looking to purchase the team from disgruntled owner Ken Behring, who had temporarily moved the Seahawks to Southern California. But Allen said he’d commit to buying the franchise in 1996 if voters passed a measure to help fund the construction of CenturyLink Field.

As part of a celebration for Allen’s 20th year of ownership in 2017, the Seahawks published a four-part series on its website last year that details how his leadership style helped create a winning culture within the franchise and a positive impact on Seattle itself. Allen was frequently seen in the locker room after games. 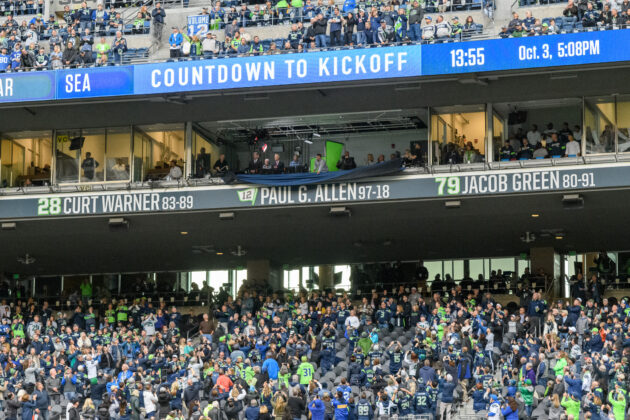 Allen’s impact on Seattle went far beyond sports (he also owned the Seattle Sounders and Portland Trail Blazers). He helped spur scientific research by creating the Allen Institute and the Allen Institute for Artificial Intelligence; gave millions to charity through the Paul G. Allen Family Foundation; founded the Museum of Pop Culture (formerly known as the Experience Music Project); and much more.

Gary Holden, a Seahawks season ticket holder who brought a poster of Allen to Thursday’s game, perhaps put it best.

“He’s why we have football here,” Holden said. “And he’s done so much for other things, not just football. He’s a great man.”