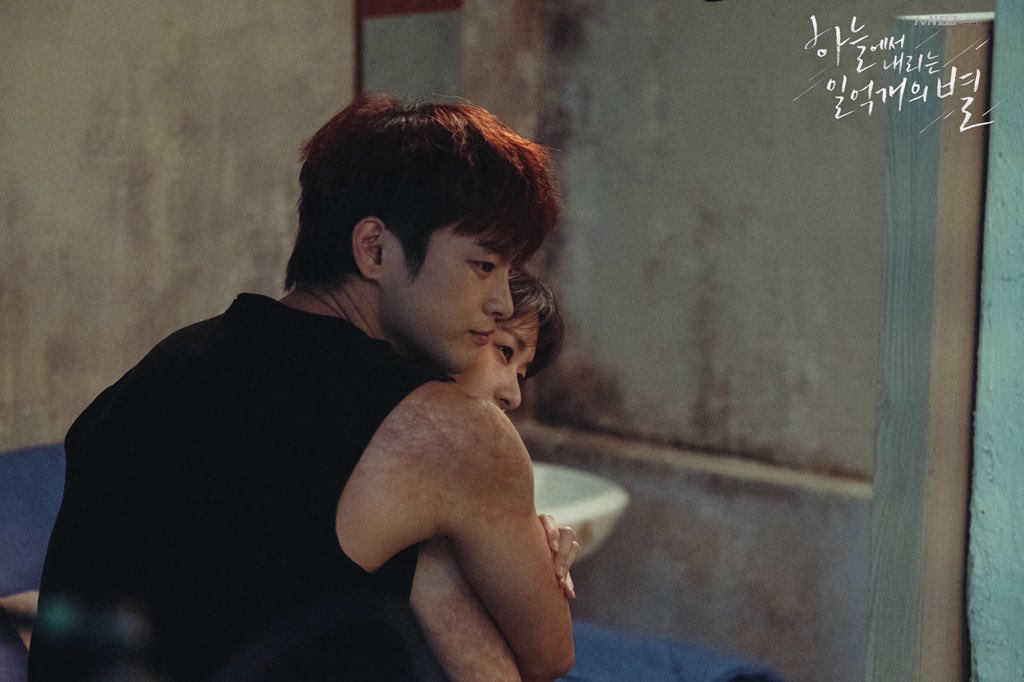 tvN’s “The Smile Has Left Your Eyes” has shared new stills that tease the unveiling of a big secret.

“The Smile Has Left Your Eyes” tells the story of Kim Moo Young (Seo In Guk), a man who is considered a monster, and Yoo Jin Kang (Jung So Min), a woman who is drawn to him as they share similar scars.

The previous episode that aired on November 14 followed Kim Moo Young as he sought to recover his lost memories from 25 years ago. Faced with the shocking truth that Yoo Jin Gook (Park Sung Woong), Yoo Jin Kang’s brother, was the man who killed his father, the episode ended with Kim Moo Young pointing a gun at him. Viewers were left on the edge of their seat, wondering what will happen to them both.

Leading up to the new episode, the drama has shared new stills of Seo In Guk and Jung So Min. The two of them had first been drawn to each other due to their burn scars. In the new stills, Seo In Guk is hugging Jung So Min from behind, and the scar that is splayed across his shoulder seems to connect with the one she has on her arm, looking like one giant scar. The two of them look at their scars with intrigue and wonder.

The production staff stated, “The upcoming episode on November 15 will unveil the secrets behind the two characters’ scars. Please keep watching to know the shocking fate that connects the two characters together.”

“The Smile Has Left Your Eyes” airs every Wednesday and Thursday at 9:30 p.m. KST. Catch up with the latest episode below!