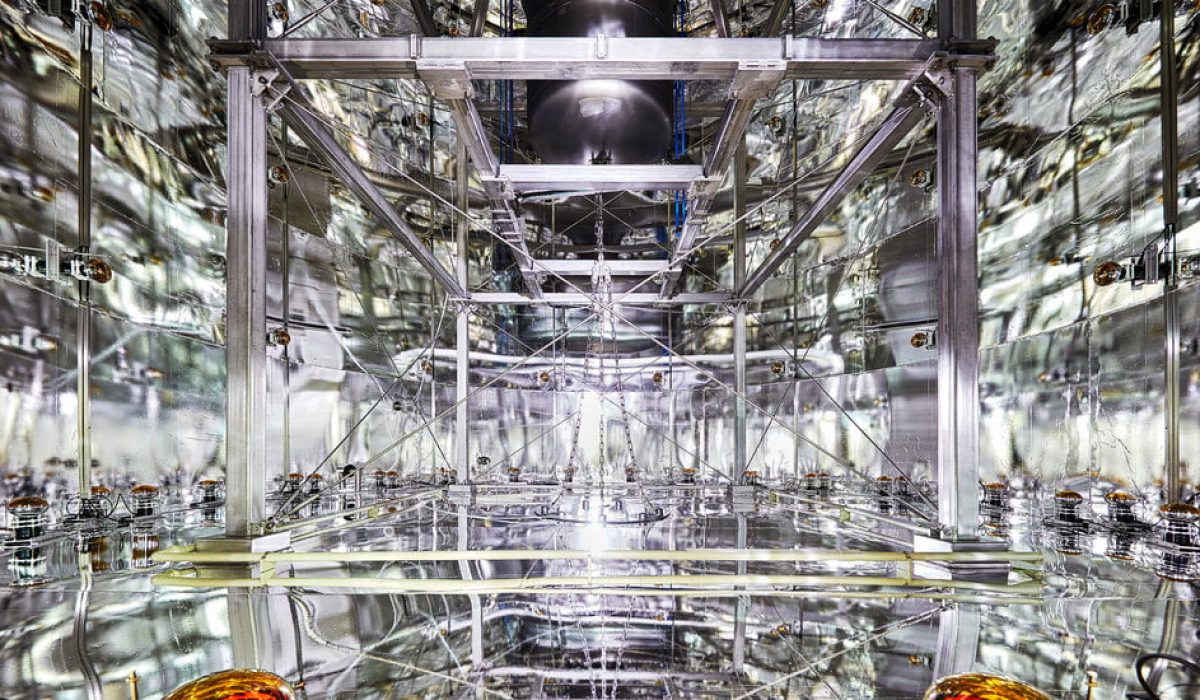 It could be a key to the secret of the universe. Or just annoying background noise, another item to be calibrated in future experiments.

A team of scientists hunting dark matter has recorded suspicious pings coming from a vat of liquid xenon underneath a mountain in Italy. They are not claiming to have discovered dark matter — or anything, for that matter — yet. But these pings, they say, could be tapping out a new view of the universe.

If the signal is real and persists, the scientists say, it may be evidence of a species of subatomic particles called axions — long theorized to play a crucial role in keeping nature symmetrical but never seen — streaming from the sun.

“It’s not dark matter but discovering a new particle would be phenomenal,” said Elena Aprile of Columbia University, who leads the Xenon Collaboration, the project that made the detection.

In a statement, the collaboration said that detecting the axions would have “a large impact on our understanding of fundamental physics, but also on astrophysical phenomena.”

But there are other explanations for the finding. Instead of axions, the scientists may have detected a new, unexpected property of the slippery ghostly particles called neutrinos. Yet another equally likely explanation is that their detector has been contaminated by vanishingly tiny amounts of tritium, a rare radioactive form of hydrogen.

The collaboration posted a paper describing the results to its website on Wednesday.

Or it could all just be a statistical fluctuation that will go away with more data. Members of Dr. Aprile’s team conceded that the best explanation they had right now — that axions were to blame — has two chances in 10,000 of being a fluke, a far cry from the “5-sigma” criterion of less than one chance in a million needed in particle physics to certify a “discovery.”

“We want to be very clear that all we are reporting is observation of an excess (a fairly significant one) and not a discovery of any kind,” said Evan Shockley of the University of Chicago in an email.

Frank Wilczek, a Nobel laureate at the Massachusetts Institute of Technology who was one of the first physicists to propose the axion, noted the collaboration’s own caveats in the paper. But he said it was “certainly intriguing, and the physics community will be eagerly awaiting further developments.”

Other scientists responded with cautious excitement, or excited caution.

“I’m trying to be calm here, but it’s hard not to be hyperbolic,” said Neal Weiner, a particle theorist at New York University. “If this is real, calling it a game changer would be an understatement.”

Michael Turner, a cosmologist with the Kavli Foundation in Los Angeles, called the Xenon collaboration “a beautiful experiment.”

“I really want to believe it, but I think it will probably break my heart,” he said. “But for now, I am excited that it could be something new and important that cheers us all up.”

Wishing on a WIMP

Dr. Aprile’s Xenon experiment is currently the largest and most sensitive in an alphabet soup of efforts aimed at detecting and identifying dark matter, the mysterious substance that astronomers have concluded swamps the universe, outweighing ordinary atomic matter by a factor of five to one.

In modern cosmology, dark matter is the secret sauce of the universe. It collects in invisible clouds, attracting ordinary atomic matter into lumps that eventually light up as stars and galaxies.

The best guess is that this dark matter consists of clouds of exotic subatomic particles left over from the Big Bang and known generically as WIMPs, for weakly interacting massive particles, hundreds or thousands of times more massive than a hydrogen atom.

The Xenon Collaboration is a multinational team of 163 scientists from 28 institutions and 11 countries. In a tunnel a mile under the rock at the Gran Sasso National Laboratory in Italy, Dr. Aprile and her colleagues have wired a succession of vats containing liquid xenon with photomultipliers and other sensors. The hope is that her team’s device — far underground to shield it from cosmic rays and other worldly forms of interference — would spot the rare collision between a WIMP and a xenon atom. The collision should result in a flash of light and a cloud of electrical charge.

READ ALSO  Samsung’s Galaxy Fold nears its re-release, but a cheaper, more practical model might be on the way

So far, it hasn’t happened.

Luca Grandi of the University of Chicago explained that in its most recent analysis of that experiment, the team had looked for electrons, rather than the heavier xenon nuclei, recoiling from collisions. Among other things, that could be the signature of particles much lighter than the putative WIMPs striking the xenon.

Simulations and calculations suggested that random events should have produced about 232 such recoils over the course of a year.

Dr. Grandi said, “We have seen the excess more than a year ago, and we have tried in any way to destroy it,” referring to the measurements.

The collaboration is in the final stages of preparing a bigger, more sensitive version of its experiment. It was delayed by the coronavirus lockdown in Italy but could now start up by the end of this year.

If the excess is real, it should show up within a month or two after it starts running, Dr. Grandi said.

So for now, all three possibilities — axions, neutrinos or tritium — are still alive, he said.

And so axions could be about to enter onto the main stage of cosmology.

The story of axions begins in 1977, when Roberto Peccei, a professor at the University of California, Los Angeles, who died on June 1, and Helen Quinn, emerita professor at Stanford, suggested a slight modification to the theory that governs strong nuclear forces, making sure that it is invariant to the direction of time, a feature that physicists consider a necessity for the universe.

Both Dr. Wilczek and Steven Weinberg of the University of Texas at Austin independently realized that this modification implied the existence of a new subatomic particle. Dr. Wilczek called it the axion, and the name stuck.

“A few years before, a supermarket display of brightly colored boxes of a laundry detergent named Axion had caught my eye,” he related in a recent essay in Quanta. “It occurred to me that ‘axion’ sounded like the name of a particle and really ought to be one.”

When he realized that the Peccei-Quinn theory implied a particle, he saw his chance.

Axions have never been detected either directly or indirectly. And the theory does not predict their mass, which makes it hard to look for them. It only predicts that they would be weird and would barely interact with regular matter. Theorists have imagined many versions of axions that could play different roles in the universe, including being the dark matter that, rather than WIMPS, fills the universe and binds galaxies. And although they are not WIMPS, they share some of those particles’ imagined weird abilities, such as being able to float through Earth and our bodies like smoke through a screen door.

In order to fulfill the requirements of cosmologists, however, such dark-matter axions would need to have a mass of less than a thousandth of an electron volt in the units of mass and energy preferred by physicists, according to Dr. Turner. (By comparison, the electrons that dance around in your smartphone weigh in at half a million electron volts each.) What they lack in heft they would more than make up for in numbers.

That would make individual cosmic dark-matter axions too slow and ethereal to be detected by the Xenon experiment.

But axions could also be produced by nuclear reactions in the sun, and those “solar axions” would have enough energy to ping the Xenon detector right where it is most sensitive, Dr. Grandi said.

Solar axions would not be dark matter, but verifying that they actually exist would be a major step toward opening up the possibility that another kind of axion could be dark matter, according to Dr. Wilczek.

Other experiments are underway to try to detect cosmic dark matter axions directly. Among them are the Axion Dark Matter Experiment at the University of Washington, which uses a strong magnetic field to detect the axions by watching them turn into microwaves. And an experiment at CERN in Switzerland, CAST for CERN Axion Solar Telescope, has also looked for axions from the sun.

Flies in the Ointment

The other exciting, though slightly less likely, possibility is that the Xenon collaboration’s excess signals come from the wispy particles known as neutrinos, which are real, and weird, and zipping through our bodies by the trillions every second.

Ordinarily, these neutrinos would not contribute much to the excess of events the detector read. But they would do so if they had an intrinsic magnetism that physicists call a magnetic moment. That would give them a higher probability of interacting with the xenon and tripping the detector. According to the standard lore, neutrinos, which are electrically neutral, do not carry magnetism. The discovery that they did would require rewriting the rules as they apply to neutrinos.

That, said Dr. Weiner, would be “a very very big deal,” because it would imply that there are new fundamental particles out there to look for — new physics.

However, Dr. Weiner and others, including the Xenon authors themselves, cautioned that both the axion and the magnetic neutrino hypotheses conflict with astronomical observations.

Dead stars, like white dwarfs, that have used up their nuclear fuel fade and cool off over time as they radiate their energy away. If they were emitting axions or these magnetic neutrinos like the sun, Dr. Weiner pointed out, they would be losing energy and fading faster than what astronomers see. He called this problem “a big tension” that he and other theorists will be brainstorming.

Tritium remains another fly in the ointment.

Hydrogen is the lightest and most abundant element in the universe. Tritium is one of its isotopes, radioactive with a half-life of 12.3 years. It is mostly produced by cosmic rays interacting with the atmosphere and is used in hydrogen bombs to help increase their explosive power.

If the isotope is the cause of the excess, the amount that would cause the readings is about “3 tritium atoms per kilogram of xenon, really an insanely low number,” Dr. Grandi said. That is almost impossible to measure except with an instrument as sensitive as the Xenon detector, he said.

It may turn out, he admitted, that tritium explains the excess and that tritium contamination will just be one more detail that has to be considered or calibrated in future detectors.

“But of course we are really excited about the possibility that these are actual signals,” Dr. Grandi said.

He added: “It’s pointing towards physics beyond the standard model, so it’s a big deal. So I think it would be an important discovery.”

Dr. Grandi is now in Northern Italy and is anxious to get back to Gran Sasso and start the work of getting the next phase of the Xenon experiment online.

Dr. Aprile, who is leaving New York for Italy in a few weeks, said, “I am mostly excited, but the really the excitement is it makes you feel so good that you have a new detector coming up.”

The universe is waiting for an answer.

“We need to push,” Dr. Grandi said, “And now I think that, you know, we might be sitting on something that might be really exciting.”