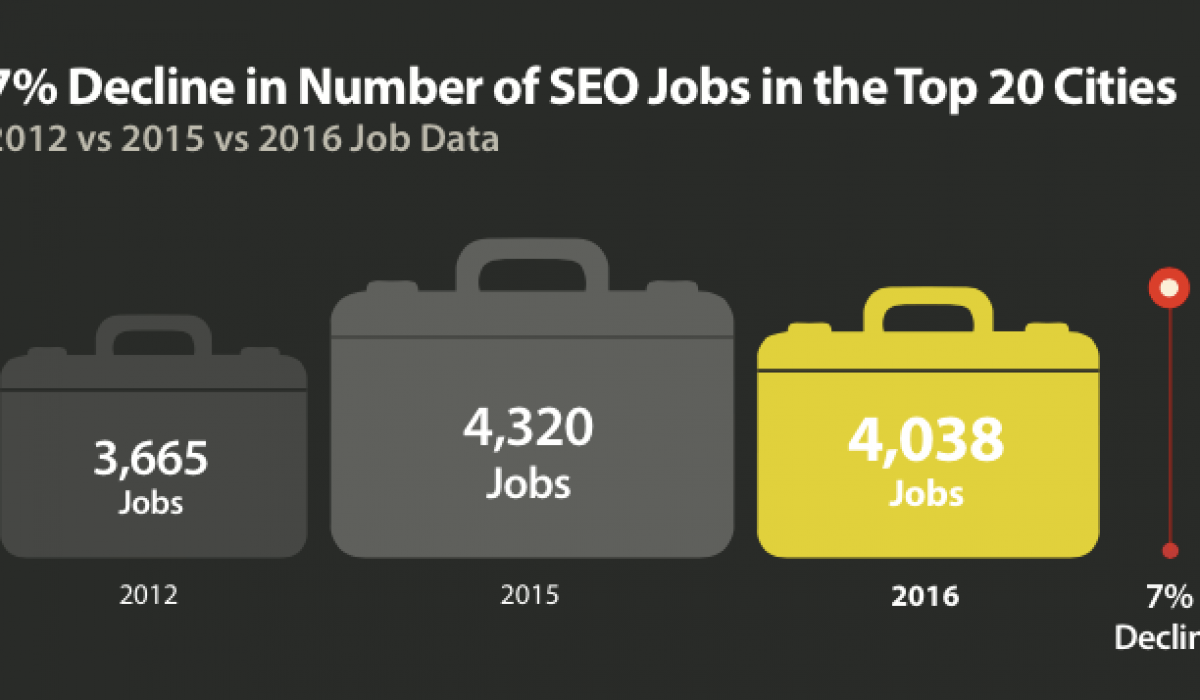 A study released this week reveals the amount of inbound marketing jobs are expected to drop for the first time in 4 years. This news comes courtesy of Conductor, who also performed the study.

Have the salaries for SEO jobs and salaries hit a tipping point? Between 2012 and 2015 they soared; should we be concerned that they’re currently dropping in 2016? Esther Chung of Conductor doesn’t believe so:

“… the decline in inbound marketing jobs and salaries actually means that SEO is on the rise. Instead of existing as a siloed function, SEO is expanding into a common skill universally featured among different roles.”

Breaking down his statment — the reason for fewer SEO jobs is because there are fewer jobs positions that are SEO-specific. Instead, businesses are integrating the skills of SEOs into broader positions within the company.

That may be the case, but one must not overlook the data which shows some cities are seeing especially sharp declines in both jobs and salaries.

Looking at the top 20 cities in the US, there is a 7% overall decline in SEO jobs when comparing year over year data. Job salaries took a hit as well; the average salary decline was 6%, with SEO Coordinator seeing the sharpest decline at 19%.

“All job roles saw a salary decline except the Account Manager role, which saw a slight salary increase of 1%,” says Chung.

That might sound alarming for those of us who work in the SEO industry, but it might not be as bad as it sounds. There’s no indication that there’s a decrease in the demand for SEO-related skills. In fact, according to Chung, the opposite is true.

Instead of having one person or one department working on SEO, Chung suggests SEO skills are becoming so integral to an company that it’s becoming a needed skills for professionals working in all departments.

Instead of SEO as a job skill held by a single marketer on a team, SEO is becoming a needed skill for a diverse set of professionals across the organization.

“SEO is leveraged by executives to understand drops and gains in revenue… SEO now touches many more roles as a foundational part of how companies function and grow.”

Rand Fishkin of Moz was quoted in the study, agreeing with Chung’s analysis that SEO is becoming less of a job title and more of a general requirement or all within an organization.

As for SEO job salaries, Fishkin believes that correlates to the fact that since SEO is becoming more of an essential skill, there are more entry levels positions within a company that list SEO as a job requirement. With that being the case, the average SEO salary will naturally decline.

As with any job skill, there are levels of experience. An entry-level position for a job that requires SEO as a skill would obviously be less than a senior level SEO account manager, for example. Fishkin says to be aware of the numbers, but also put them into perspective with the bigger picture of what’s going on in today’s industry.

In case any of this worries you that there is less of a demand for your skills and experience working in SEO; know that it is #4 on LinkedIn’s list of skills that get people hired, which is the highest it has ever been.

For more information about marketing jobs and salaries across the job; see Conductor’s complete 2016 Marketing Jobs and Salary Guide.

READ ALSO  How to thrive within the fast-paced SEO environment
jobs, Salaries, seo