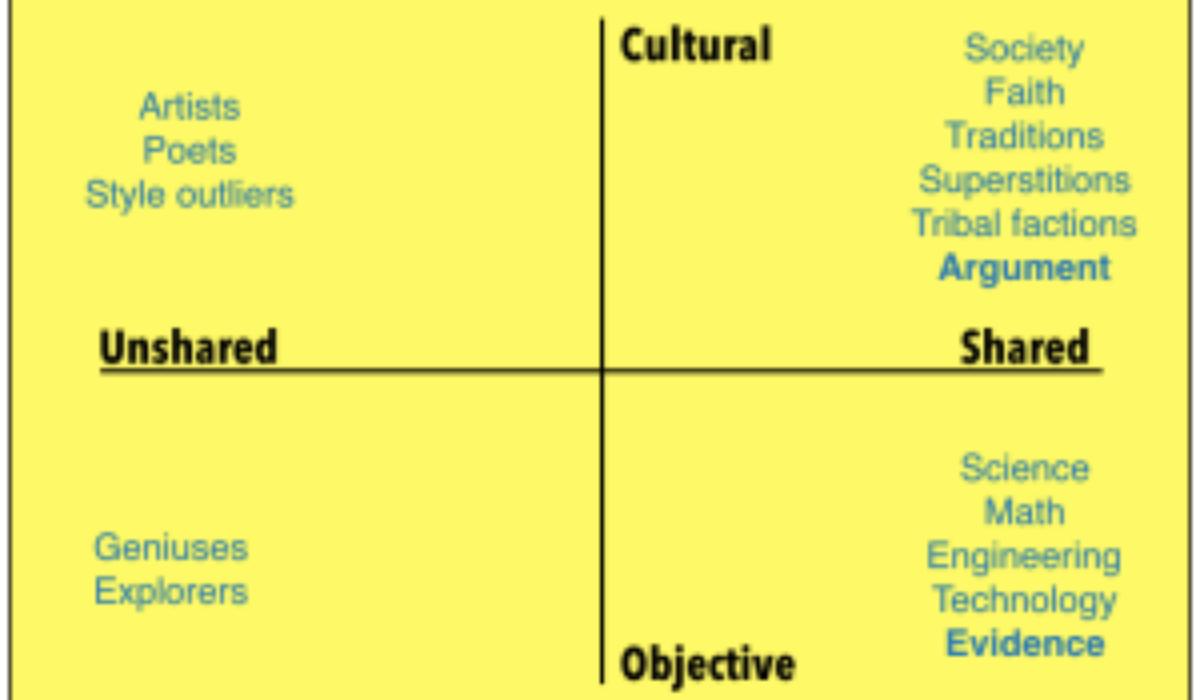 That’s not the only way we experience the world, and until relatively recently, it wasn’t even the dominant one.

The sun rose this morning. You don’t have to agree with me, but a stranger to our disagreement would confirm that it happened.

Objective reality is measured. It’s not based on talking points. It’s repeatable and verifiable.

When humans share an understanding of how things are objectively, we’re able to make enormous progress, because this objective reality is consistent. It doesn’t matter which group we’re in, or who our leaders are. We don’t have to check with someone else before we can decide if what’s in front of us is true or not. So we can work together to build roads or bridges, to cure an illness or make an omelet.

Much of our life is actually driven by shared cultural reality instead. This is what happens when ‘we’ all agree that brides wear white, or that squirrel isn’t worth eating. There isn’t a universal ‘we’, simply groups that define themselves that way. Shared cultural reality is essential to create harmony within groups, but it can drift over time, sometimes erratically, because the compass can change. It can change when leaders insist it does, and it can change in the face of other changes in the culture.

Our cultural and our objective realities overlap and often conflict. For example, too often, we’ve made the cultural decision that people of certain races, backgrounds or genders are somehow inferior. In the face of objective reality, the cultural reality is (too slowly) changing. Shared cultural reality can stick around for a long time, again because there’s no agreed-upon compass to point to. It’s surprising but likely true that the most devout cheerleader for a given cultural tribe would have been stoned as a heretic by that same group a hundred years ago. The context shifts.

Amplified by the media, divisions over this cultural reality are getting worse. Spin, widely spread, not only seeks to divide us on cultural issues, but resorts to insisting that the objective reality that is challenging those issues isn’t real. By seeking to deny the things we ought to be able to agree on, it sets us back.

The other two corners of 2 x 2 grid are:

Unshared objective reality. This is the scientist or scholar we call a genius. Someone who sees the objective truth before the others, who is pilloried and then celebrated for challenging the status quo we all will be abandoning one day soon.

And unshared cultural reality. This is the artist, the poet or the offbeat person who is living with a different set of cultural rules than the rest of us.

The conflict of our time is between people who are challenging our shared objective reality by claiming that their shared cultural reality takes precedence over what we’ve discovered. And vice versa–objectivists who insist that cultural reality doesn’t matter. It does. It makes us human and helps us find meaning.

They’re different, but we need them both. One way to accomplish this is to not confuse them.

The banana is not a threat to the bicycle.