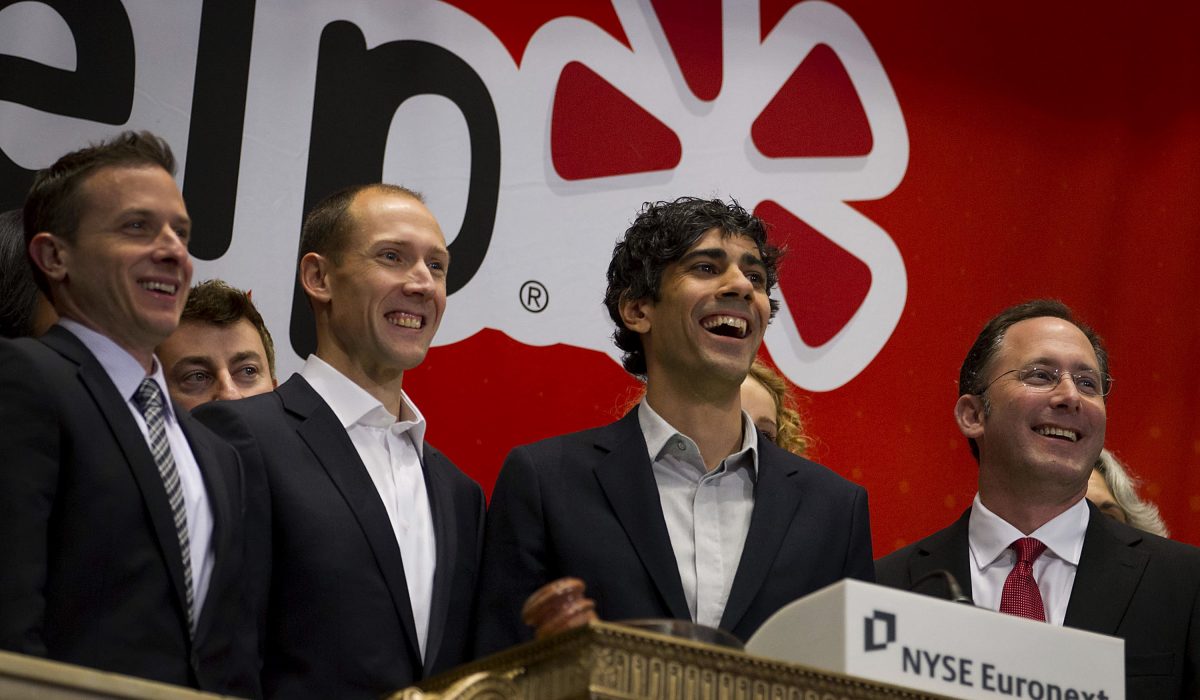 Jeremy Stoppelman, chief executive officer of Yelp Inc., center, rings the opening bell with Chief Operating Officer Geoff Donaker, second left, and Chief Financial Officer Rob Krolik, right, at the New York Stock Exchange (NYSE) in New York, U.S., on Friday, March 2, 2012. Yelp Inc., the site that lets users review everything from diners to dentists, surged as much as 73 percent in its first day of trading after selling shares for more than planned in an initial public offering.

While the crowdsourced reviews company reported third-quarter earnings on Thursday that missed expectations on the bottom line and barely topped revenue expectations, shares rose more than 15% Friday. Yelp reported earnings per share of $0.14, falling short of $0.19 expected, and the company posted revenues of $262.47 million versus $262.25 million expected.

Despite a no-frills third quarter, investors were heartened by Yelp’s fourth-quarter guidance.

READ ALSO  Envy in Business is a Deadly Sin

Some of the investor excitement may be because third-quarter earnings imply that Yelp has yet to be significantly hurt by increased competition with Google. However, some investors are more bearish on the stock, unsure if Yelp will remain competitive moving forward.

“Yelp’s 3Q results seemed unaffected from increased search changes and competition, and the company attributes this to success with the app. Nevertheless, threats from search, Google Maps, and vertical specific players continue to loom,” a note from Raymond James said Friday. “Given the degree of acceleration implied in 4Q guidance, small changes in the search funnel and competitive landscape could carry a disproportionate impact.”

Yelp co-founder and CEO Jeremy Stoppelman responded to investor concerns about advertising competition with Google by emphasizing increased regulatory scrutiny against Google and the growth of the Yelp app.

“Obviously there’s always going to be some volatility on the [search engine optimization] side as Google tweaks algorithms, but we feel great about all the engagement we see on our Yelp app and continue to see overall engagement at a healthy rate,” Stoppelman said during the company’s earnings call Thursday.