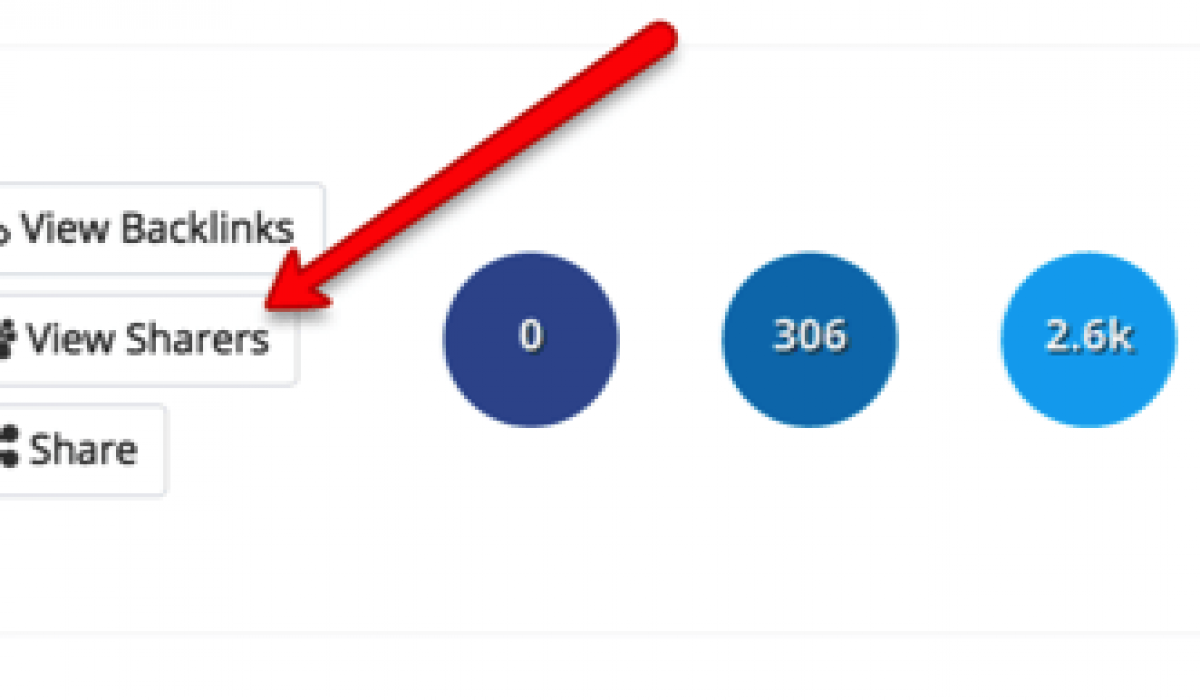 Find the original post on Point Blank SEO at: %%PostLink%%

A few Saturday nights ago, I had a bit of a eureka moment.

I’d been thinking about how we could prospect for social influencers in a way that was more data driven than the current approach of doing keyword searches on tools like Followerwonk.

An interesting feature of BuzzSumo was introduced to me a few weeks prior by AJ Ghergich (@SEO), a marketer that’s very talented when it comes to content promotion. He pointed out to me that you can see exactly which Twitter accounts shared a given piece of content, via the ‘View Sharers’ button next to each result.

This was very interesting, and thought it would be useful to simply grab a list of who shared a specific piece of content that was relevant, and add them to our prospecting lists.

However, on that Saturday night, I realized that this feature was much more powerful than that.

But before we explain how, let’s start with how we currently generate quick-win link prospecting reports for new clients to give you the background knowledge required to make the connection.

What we do, as with any other link building agency, is we look at where our client’s competitors were getting links. We’d then combine those reports together to see which specific pages were linking out to multiple competitors. Linking out to 3 or 4 of our competitors is a much stronger signal of being willing to link to us than those pages that only link out to 1 competitor.

So, I realized that night that you could apply this same methodology to the concept of who would be interested in sharing our content, utilizing this BuzzSumo feature.

If Joe Shmo shared 6 of the top 25 posts on this topic, then there’s a good chance he’ll be interested in my content on this topic too.

So let’s break down the process:

1. Type into BuzzSumo the topic of the content asset you’re trying to promote.

2. Click the ‘View Sharers’ button for each result & Export that data.

3. Merge all of the resulting CSVs together into a single sheet. (I use Terminal. More info here, step #3.)

Make sure to delete the extra header rows before proceeding to the next step.

4. Use the =COUNTIF formula in Excel to see which usernames occurred most in the entire list. (More info here, step #5.)

Finally, de-duplicate the list based off values in the username column (column F).

What this is doing is taking, for example, those who shared 25 different articles on your topic, and seeing which Twitter users shared the highest number of those articles. So if Joe Shmo shared 6 of those 25, it shows their interest in the topic, and potentially that they’d be very interested in your content as well.

Here’s an example file based off the top 10 most shared articles on Link Building, sorted by our new column (I marked as ‘occurrences’):

Weeding Out The Bots

Before you’re good to go, it’s important to clean up the data by introducing some indicator of whether they’re a real person or a bot, seeing as there’s many accounts on Twitter that just endlessly tweet links.

Luckily, we’ve got a couple metrics already in our spreadsheet:

You’re never going to be able to perfectly determine if a user is a bot based purely off those two metrics. For example, you might think a low reply rate (<10%) indicates it’s a bot, but some influential accounts (i.e. @TechCrunch) don’t interact much on this level with their followers.

Then they’re probably a bot. Far from perfect, but you get the point. I haven’t perfected this criteria quite yet, but will report back when I do.

This process can help you generate qualified lists of social influencers that you could use for:

READ ALSO  How to Adapt a Mentality of Helping Over Selling

My team will be mainly utilizing the first two, given that this list was generated in a way that makes those two use cases perfect.

To me, generating prospecting lists in this way does a much better job of relevance qualification than any single keyword could ever do. You don’t have to reinvent the wheel and go all Alchemy API on a user’s Twitter stream. You can simply just pre-qualify a list of related, highly shared articles, which is much less work.

It’s also important to note that in these data exports from BuzzSumo you have a plethora of other data, such as the websites of the various Twitter users, so if you’re a marketer with limited resources and can’t generate this data otherwise with your own tools, this is another advantage.

What do you think?

Would love to hear your feedback on the idea. We’ll be scaling it up internally as we begin to ramp up our content promotion efforts.

Note: Would also love to know if anyone has a way to do this without BuzzSumo; I don’t want this post to seem biased towards their tool, I just didn’t know of another way to get this data quickly, although truthfully I’ve barely investigated alternatives.

Social Influencer Prospecting with Co-Citation is a post from: Point Blank SEO

Find the original post on Point Blank SEO at: %%PostLink%%