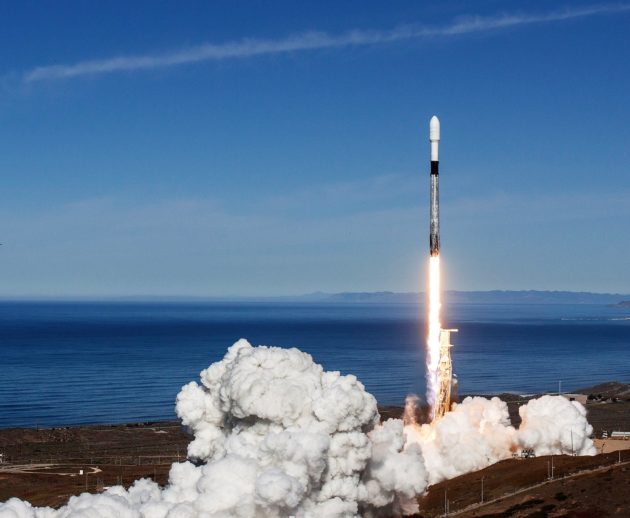 Three weeks after announcing that it’s getting into the rideshare market for launching small satellites, SpaceX slashed its prices by more than half – and said it’ll be offering rideshare opportunities on its Starlink broadband satellite launches as often as once a month.

Today’s moves suggest that SpaceX is amping up its effort to get in on the small-satellite launch market, using a strategy pioneered by Seattle-based Spaceflight.

Spaceflight made a splash last December by arranging a 64-satellite launch on a SpaceX Falcon 9, but after coping with the complexities involved in herding that many satellites together, the company is heading in a different direction.

“Providing rideshare services on small- and medium-sized launch vehicles is becoming a better fit” for the needs of its customers, Spaceflight said when SpaceX made its initial rideshare announcement on Aug. 5.

In a follow-up announcement emailed to GeekWire and other media outlets today, SpaceX said it has “received a lot of interest and great feedback from customers.”

“As such, we have updated the terms of the program and have made the service even more compelling with reduced pricing and increased flight opportunities,” SpaceX said:

Instead of charging $2.5 million to launch a payload weighing up to 150 kilograms (330 pounds) to sun-synchronous orbit, SpaceX is now advertising a base price of $1 million for launching up to 200 kilograms (440 pounds) of ESPA-class payload, with the charge for extra mass priced at $5,000 per kilogram (2.2 pounds).

Last week, California-based Momentus Space announced plans to provide an orbital shuttle service to its customers on SpaceX’s first dedicated SmallSat Rideshare mission. Momentus said its Vigoride spacecraft would be available to carry up to 250 kilograms’ worth of satellites to custom orbits, on a Falcon 9 mission set for liftoff no earlier than late 2020.

Going forward, the SmallSat Rideshare Program would offer three regularly scheduled missions per year. If a satellite operator had to miss a launch, the money that was paid out could go toward a later mission, subject to a 10% rebooking fee, SpaceX said.

“In addition, SpaceX will offer launch opportunities to mid-inclination as often as a monthly basis on Starlink missions, as well as missions to sun synchronous and/or polar orbits,” the company said.

SpaceX’s Starlink satellites are manufactured at its facility in Redmond, Wash., and the first set of 60 operational satellites was launched in May. Eventually, thousands of Starlink spacecraft are to be put into low Earth orbit to provide global broadband internet access.

Starlink could go into limited commercial operation as early as 2020 or 2021.

Although SpaceX has released few details about pricing or availability for Starlink service, CEO Elon Musk has said revenue from selling broadband access could pay for the development of the company’s Starship super-rocket and eventually fund the construction of a city on Mars. Charging a price to let other people’s satellites piggyback alongside Starlink spacecraft could help in the shorter term.