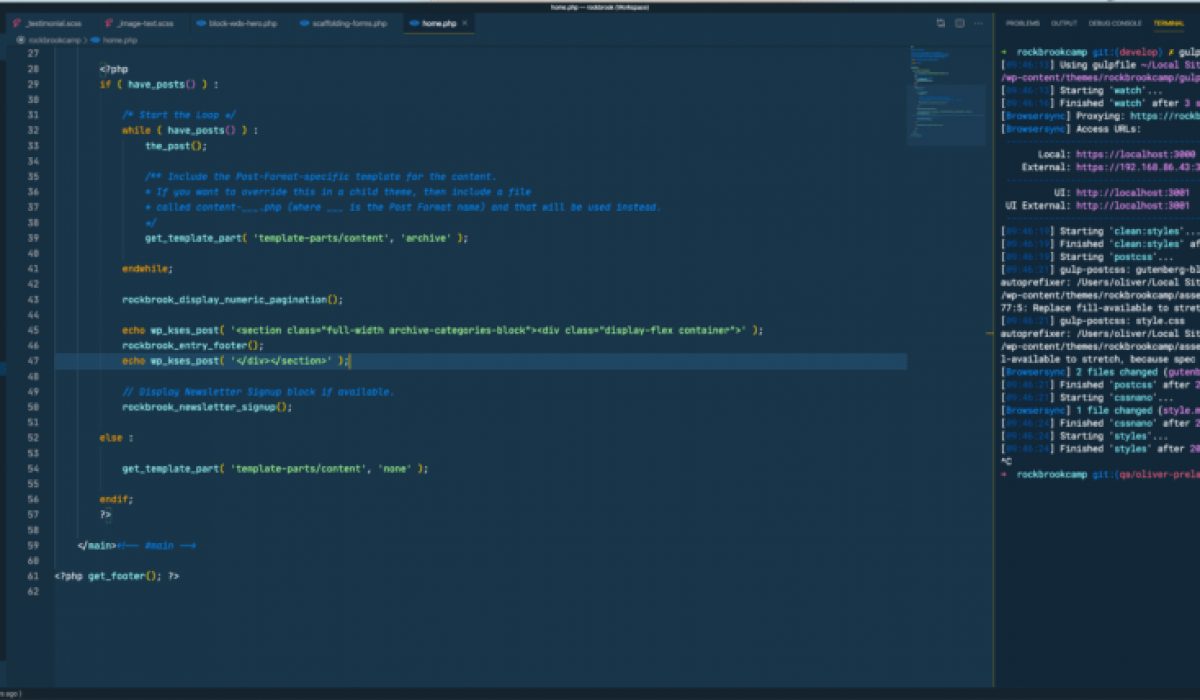 Visual Studio (VS) Code was released on April 29, 2015 by Microsoft. In a very short time, it has taken the coding world by storm. As of 2020, nearly 51% of developers claim to use it as their primary development environment.

This, in itself, is shocking. When it first came out, nobody expected a tool made by Microsoft to become so dominant. After all, Sublime Text and Atom (made by GitHub) were incredibly popular and had a large user base; Microsoft had a large hill to climb.

Microsoft did lots right when developing VS Code, but there are a few (okay, five) specific things that sick out (to me) that make it universally appealing. First and perhaps foremost, they integrate extensions as a primary function of the IDE.

This focus is obvious. It has a button in the activity bar! Extensions are popular in Atom and Brackets, as well (both very similar IDEs built on Electron), but neither have made extensions so accessible and simple. This means that if, for some reason, you want your editor to work differently, there’s probably an extension for that. If there isn’t one, you can code one yourself using their thorough documentation and API.

Secondly, Visual Studio Code is fast. Maybe not FAST like Sublime Text (which is built with C++, as opposed to JavaScript and HTML, implemented with Electron), but significantly faster than either Atom or Brackets. And you know what they say: you don’t have to be faster than a bear, you just have to be faster than the person next to you. The speed of VS Code makes similar editors feel sluggish and unresponsive.

Then there’s Git. Sublime doesn’t have it out of the box. Atom does, but VS Code just does it better. Want to git a lot of developers excited? Get Git right!

Microsoft made Visual Studio Code open-source, hosting it on GitHub. This was unexpected. Microsoft is not known for being open-source-friendly. Perhaps this was originally a foreshadowing of June 2018, when they bought GitHub for $7.5 billion. No matter what the reason, being open-source invigorated and built a community, quickly.

The last thing that sets them apart is actually two things that works as one: they have listened to their user base on GitHub, then have promptly fixed or added whatever had been requested. This responsiveness has captured many fans and caused Visual Studio Code to improve leaps and bounds in a short time. Today, they’re at nearly 60,000 commits with no signs of slowing down. Developers love them some pull requests (PRs) and lots and lots of commits.

(In comparison, Sublime Text 2 had, at one time, appeared to have stopped development entirely, with Sublime Text 3 seemingly forever in beta. It was eventually released on September 13, 2017.)

Speed Up / Customize / Tweak Your Development

Before you continue, I’ve got to break something to you. The following tips aren’t necessarily unique. I haven’t discovered hidden settings that nobody else has found.

Instead, the following pieces of advice aim to surprise you with a new keyboard shortcut or an extension you hadn’t heard about. I’d like to try to address almost all aspects of how you can modify or customize VS Code to your liking, not just list a bunch of neat extensions. If you need a more in-depth primer on everything Visual Studio Code, I recommend reading the official Getting Started Guide, which is fantastically thorough.

One last thing, all of the keyboard shortcuts are for MacOS; I chose to omit the Windows shortcut as opposed to getting some wrong. Here’s the Windows VS Code shortcuts reference, the MacOS shortcuts, and the Linux shortcuts.

If there’s one thing that you can do that will go furthest in enhancing your enjoyment and efficiency when using Visual Studio Code, it’s making sure you use a color theme that is legible and reduces your eye strain. A lot of developers will be staring at their IDE for hours at a time, so you owe it to yourself to find a theme that works for you.

Here are a few I’ve used for quite some time and enjoy a lot. You might notice these are all dark themes with nary a light one to be found. After trying a few light themes for a while, I just couldn’t get past the extra strain they put on my eyes. For me, when coding, darker is better. If lighter themes are your jam, check out some good ones here.

Monokai Pro (nagware – 10€ to remove the occasional popup, but it’s worth it!)

I prefer the Material Icon Theme, but VS Code Great Icons are also… uh, great. Emmet is a great time-saver, allowing you to write a bunch of custom HTML & CSS snippets on the fly. Pro tip: use multi-cursors (find out how below) to activate Emmet in a variety of spots at once.

Here’s a great tutorial on all the ins and outs of Emmet in VS Code. Some quick Emmet shortcuts can be found below.

Add the following to your Settings file (cmd + ,), or modify them with the Settings UI:

READ ALSO  Learning to Master the Art of Your Career

The official Key Bindings list can be found here. So, why use font ligatures at all, and what are they?

Ligatures are a font that will merge several characters into a single one, to make them more legible or to stand out in some way. In programming, that basically means you’ll see ⇒ instead of => and ≥ instead of >= and so on. Different fonts will support a different number of ligatures, so try a few to decide what works for you. Here’s an example of the ligatures supported in Fira Code: Want to try some out? Cool. To start, enable ligatures in your settings by adding “editor.fontLigatures”:true, (or use the UI) then install and select one of the following fonts:

Get a Wider Monitor

No, really. Consider buying an ultrawide monitor. Check out the screen real estate! This is one of best things I’ve ever done to increase my productivity.

That’s all I’ve got. If I find some new efficiencies, I’ll add them here so be sure to check back periodically. Also, if you find some that I’ve missed, feel free to share them with me on twitter.

The post Speed Up Your Development with Visual Studio Code appeared first on WebDevStudios.