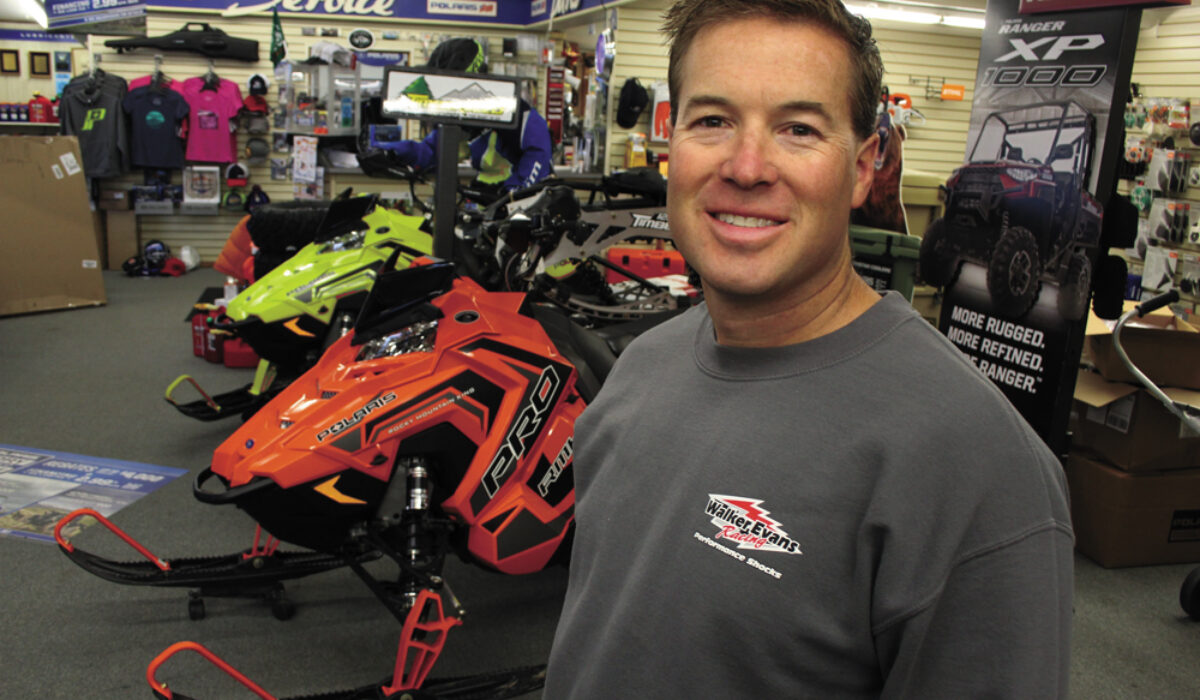 PINEDALE – Building on last winter’s “Sled the Winds” marketing campaign and “The Real Wyoming” campaign of this past summer, the Pinedale Travel and Tourism Commission and its Jackson-based consultant, New Thought Digital Media, are launching a new campaign for the coming winter and spring: “A New Highmark is Waiting.”

Like “Sled the Winds,” this one plays on the reputation Pinedale and Sublette County have for offering some of the best snowmobile riding in the entire United States.

Among snowmobile enthusiasts, “highmarking” is an activity in mountainous terrain in which the rider tries to climb as high as possible up a slope and then bring the machine down again without losing control.

At Bucky’s Outdoors in Pinedale – in business since 1961 and a Polaris snowmobile dealership since 1975 – owner Sandy Sletten said the marketing emphasis on snowmobiling won’t necessarily attract longtime snowmobile enthusiasts because they already know about Sublette County. But it might attract some who are just getting into the sport.

“The winters are long here and there’s a lot of snow, so it’s what people did for a long, long time,” Sletten said. “We have hundreds of miles of groomed trails and it is becoming a destination.”

In addition to people who venture in from the neighboring states of Montana, Idaho, Utah and Colorado, Sletten said he has customers from states such as Minnesota, Iowa and Michigan.

The rental business was steady, Sletten said, and about nine out of 10 of those who rented were from out of town.

But even veteran snowmobilers visiting the area for the first time can be taken by surprise, Sletten noted.

“They’re just in total disbelief of how good it is,” he said. “Powder’s a big deal. Everybody likes to ride in it because it’s so good. You can get a lot of that out here.”

The marketing campaign did a service for the whole community by bringing more visitors to town, Sletten said – he just puzzled over the “Sled the Winds” slogan. The fact is, most of the Wind River Range is designated as wilderness, and so off limits to motorized vehicles such as snowmobiles. The really great snowmobiling is west of Pinedale in the Horse Creek area and up into the Wyoming Range, and to some degree in the Upper Green River area.

City council member Matt Murdock, who chairs the Pinedale Travel and Tourism Commission, said the marketing campaign had good reason for going the direction that it did – something called “search engine optimization,” or SEO. The commission wants people searching online for information about snowmobiling adventures to find its marketing pitch easily.

“‘Sled the Wyoming Mountain Range’ is a lot more complicated than ‘Sled the Winds,’” Murdock said.

But once people check it out, they quickly learn about the Wyoming Mountain Range and its snowmobiling opportunities. And the Pinedale Travel and Tourism Commission wants to promote the whole area, not just Pinedale, Murdock said.

This year’s online campaign will cost less in the winter because so much work was done last year. The plan is to spend $49,000 for online advertising in budget year 2017 for winter, summer and fall, of which $13,000 for winter campaign.

The money to pay for it all comes out of visitors’ pockets. Pinedale voters earlier in 2017 voted to increase the town’s lodging tax from 3 percent to 4 percent. The proceeds of that tax are estimated this year at near $190,000, of which 10 percent goes to the town of Pinedale and 90 percent goes to the Pinedale Travel and Tourism Commission.