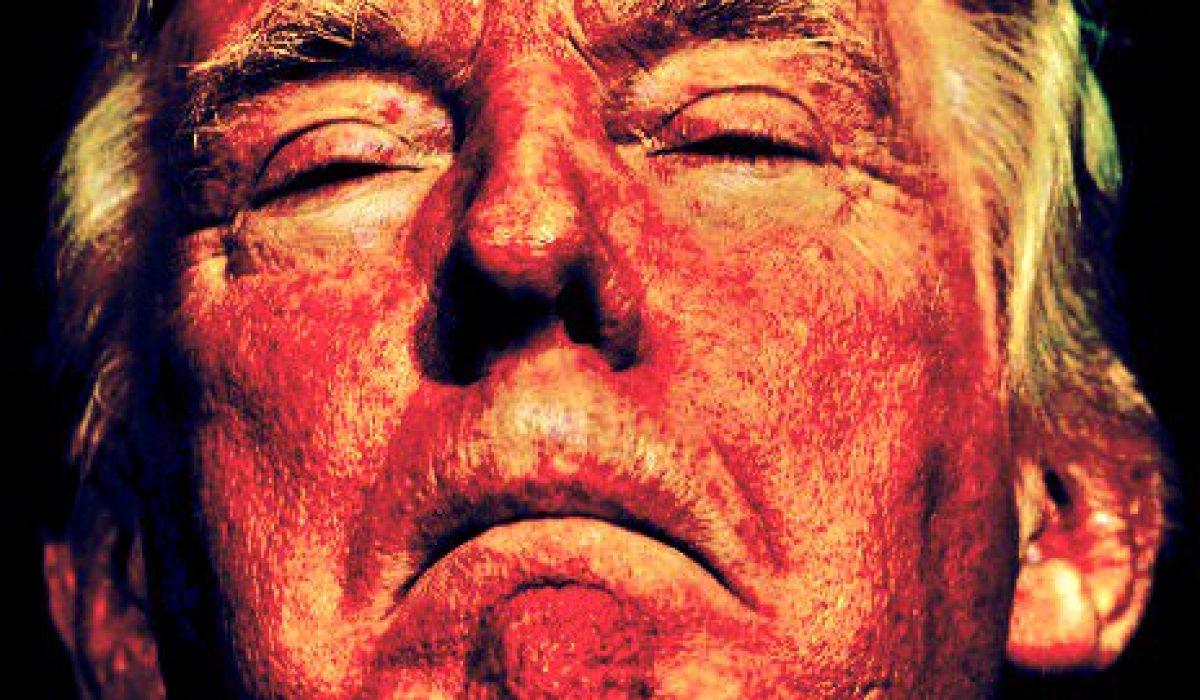 On Wednesday, June 28, at 9 a.m., Future Ex-President Donald Trump was watching TV when he should have paid attention to – take your pick: the environment, jobs, health care, Putin and the upcoming  G20 summit, the Middle East, North Korea, to name a few top-shelf issues. Instead, he washed down his breakfast with a cup of Morning Joe. Feeling ill, then he disgorged it via Twitter.

I heard poorly rated [email protected]_Joe? speaks badly of me (don’t watch anymore). Then how come low I.Q. Crazy Mika [Brzezinski ], along with Psycho Joe [Scarborough] came..to Mar-a-Lago 3 nights in a row around New Year’s Eve, and insisted on joining me. She was bleeding badly from a face-lift. I said no!

Media outlets, the political establishment and women and men of all ages have responded with outrage, disappointment and, of course, resignation. They’ve scolded Trump but there are no consequences. In fact, the public’ s impotent rage emboldens him.  Trump won’t or can’t change his bullying behavior. Why should he? It’s worked for him so far. His perception is that Mika and Joe should be kissing the tip of his long, red necktie after all he has done for them. Instead of fawning, they are critical. Worse than disrespectful, they are disloyal. There is no greater crime in Trump Nation. Just ask James Comey.

A billionaire, even a pseudo-billionaire, answers to no one. He can buy loyalty or he can coerce it. A billionaire as President, this one at any rate, is not a public servant. He serves himself, not the citizenry. He approaches his office as he approached his business empire, Trump 24/7, surviving on instinct, impulse and intimidation.  Not only is Trump unrepentant; he remains indignant. He sent forth his new de facto spokesperson, Sarah Huckabee Sanders, to pistol-whip an infuriated press corps.

I don’t think you can expect someone to be personally attacked day after day, minute by minute, and sit back…When the president gets hit, he’s going to hit back harder.

Her message is that Trump was elected because he is a fighter. He answers to no one. He is a victim, and he will visit retribution on those who seek to question anything he says or does. When asked if she would point to her misogynistic boss as a role model for her children, Sanders sidestepped the question, citing only the Almighty as worthy of emulation.

Mika has urged her colleagues at MSNBC to treat the contretemps as a news story – search engine optimization to be sure. Let’s take her up on it. Morning Joe tripped over itself during the campaign to deliver airtime to candidate Trump, prospering from the ratings spike that came with it. They weren’t alone. Many political/news shows fed at the trough. Trump capitalized on the feeding frenzy, getting free coverage while his Republican opponents remained invisible.

After the election, the media took a big hit for helping elect this case of arrested development. As for Trump, the tiny gloves were off.  He complicated matters by spurning his newsy chums, people like Mika and Joe, whose backs served as stepping stones for his way to Washington. He attacked the industry, trivializing  their reports as fake news and countering their stories with his own version – what he calls alternative facts, formerly known as lies.

The conventional wisdom is that his tweets are part of a distraction and deflection strategy, drawing attention away from the crippled Healthcare Un-Initiative. That’s probably true, but Trump’s renewed personal attacks – low IQ, psycho, bleeding from a bad face-lift – are disgusting in a way that sickens his erstwhile allies.

In a model of understatement, House Speaker Paul Ryan said, “What we’re trying to do around here is improve the tone and civility of the debate, and this obviously doesn’t help to do that.” Of course, it is vital to maintain a civil tone while stripping 20 million or so citizens of healthcare –  a kiss before dying.  Senate Majority Leader Mitch McConnell did not comment on the brouhaha. He tweeted about his Stealthcare bill but otherwise was hiding under his desk.

My suggestion is that we move on now that our collective outrage has been vented. There are existential issues before us, and we’re well-advised to pay attention to those we may influence, instead of continuing to wring our hands futilely over our national embarrassment.

READ ALSO  How IT is revving up the growth engine at Ashok Leyland, IT News, ET CIO
Bullys, Moderate, Pulpit, Voice