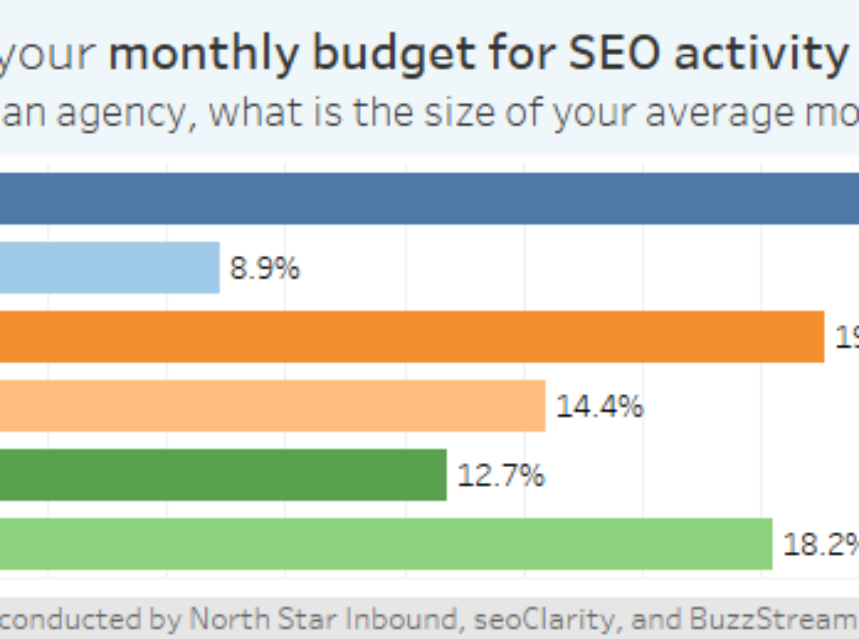 As we come to the end of 2017 and embark on the inevitable dozens of review articles looking back over the past year of search, it’s as good a time as any to reflect on SEO strategy.

What are the greatest challenges being faced by the industry as a whole? What have been the biggest successes? What are companies of different sizes setting as their top priorities for SEO strategy – and how well is it paying off?

To find out, link-building and content marketing agency North Star Inbound, in partnership with seoClarity and BuzzStream, set out to “take the temperature” of enterprise SEO.

They surveyed 240 SEO specialists across the USA from both in-house and agency teams, in a bid to discover how and where enterprise SEO teams are spending their budgets, their most pressing issues, their biggest stumbling blocks, their perception of their own success, and more.

The results shed an intriguing light on what different companies consider to be most important about SEO, how they go about tackling those issues, and which SEO tactics pay the greatest dividends – particularly in terms of how these findings vary across businesses of different sizes, and between in-house and agency SEOs.

So what were the key findings, and what do they mean for the way that SEO is being carried out in 2017-8?

Resources for enterprise SEO: What are they, and where are they going?

How much of a company’s budget and workforce typically gets allocated to SEO? And where do enterprise SEO teams primarily focus their time and attention?

Unsurprisingly, larger companies tend to outspend smaller firms when it comes to SEO, but the study found that companies’ SEO budgets cover the whole range – meaning there is definitely no “magic number” for SEO spend.

Perhaps surprisingly, 11% of large companies (with 500+ employees) fell into this bracket – though of course, it’s not just about what you spend on SEO, but how you spend it.

What about people power? The study found that the most common size of SEO team is 2 to 5 members – regardless of the overall size of the company. Two fifths of respondents surveyed (42%) reported working in an SEO team of 2 to 5, while close to a third (32%) had 6 or more people in their team. Nearly a quarter of companies (23%) said that the responsibility for SEO falls on a single person.

Regardless of resources, companies seemed to broadly agree on their priorities for SEO. When asked to rank four areas of SEO in order of priority, respondents from companies of all sizes reported that their top priority was technical SEO.

But maybe enterprise SEOs should be putting more emphasis on link-building, as survey respondents overwhelmingly described it as the most difficult SEO strategy to execute. Well over half of respondents (58%) ranked it top out of a list of eight, with small companies (with 1-100 employees) feeling the pain most of all.

Why is link-building proving such a tough nut to crack? Let’s look at how enterprise SEOs are tackling link-building.

Well over half of survey respondents reported that link-building was their most difficult strategy to execute, although there were some noticeable variations by size. 68% of small companies rated link-building as the most challenging part of SEO, followed by 62% of medium-size companies and 42% of large companies.

But the difficulties associated with link-building aren’t preventing SEOs from investing in it. 85% of respondents, across all business sizes, reported that they will be maintaining or increasing their link-building budgets this year. Link-building can be done in a huge number of ways, but there were clear frontrunners for the most effective strategies. SEOs from small, medium and large firms all reported that public relations is their most beneficial tactic for link-building, though for small company SEOs, guest posts came a very close second.

Paid links and comments were universally rated as the least effective strategies by all respondents, though this may also be due to a lack of employing these tactics in the first place – Google penalizes almost all types of paid links, and discourages systematic blog commenting as a method of link-building. Which companies have been seeing the most success with link-building as an SEO strategy? When asked to rate their most successful strategy over the past 12 months, respondents overwhelmingly pointed to technical on-site optimization: 65% of large companies, 67% of medium-sized companies and 53% of smaller firms rated it as their most effective SEO tactic.

Small companies are also more likely to be employing local-level link-building tactics such as local directories or citations. Link-building at a local level can be highly effective when carried out correctly, so perhaps this added emphasis on local SEO is making the difference for enterprise SEOs at small firms.

Finally, which KPIs are SEOs using to track their success with link-building? The favored metrics are Moz Domain Authority and Page Authority, together with the number of linking root domains (both used by 52% of SEOs).

The relevance of the linking page is third-most-used at 47%, while Majestic’s “Trust Flow” metric trails behind on 27%.

Of the 240 SEO specialists surveyed for the study, two-thirds were in-house SEOs, while the remaining third worked for an agency. What differences in approach and outlook did the survey find between these two groups?

When it comes to organizational challenges, agency and in-house SEOs differ slightly on what they consider to be the most pressing issues. Agency SEOs are more likely to encounter challenges with finding SEO talent (44% reported this as their most challenging obstacle) or demonstrating ROI (41%).

For in-house SEOs, developing the right content was their most pressing obstacle (reported by 42% of respondents), while demonstrating ROI was again a key challenge, faced by close to two-fifths of in-house SEOs (37%). Agency SEOs were least likely to struggle with allocating the right resources, with only 18% reporting this as a top organizational challenge, while in-house SEOs struggled least with securing budget (21%) but were more likely to encounter challenges in allocating it (31%).

But the real differences came in the way that agency and in-house SEOs perceived their own success. Agency SEOs were vastly more likely to be confident about their own success: 40% of agency respondents rated themselves as “Successful – we’re absolutely crushing it” compared with just 13% of in-house SEO teams.

However, perhaps in-house SEOs are just modest, as almost half (49%) rated their SEO success as “Positive – we’re doing well enough” (versus 39% of agency SEOs).

In-house SEOs were also more likely to report being “frustrated” with their SEO outcomes (the lowest possible rating) than agencies – 8% of them gave their SEO efforts this rating, compared with only 3% of agency respondents.

What do the findings from the study tell us about the state of enterprise SEO? While SEO will always depend somewhat on the individual circumstances of an organization, there are some broad conclusions we can draw from the data.