Whither infrastructure and operations?

Cloud-native, DevOps, and automation are turning I&O’s world upside down. As organizations move to self-provisioning, I&O professionals are rightfully concerned about their futures. In the world of self-service consumption, the traditional tools and tasks of I&O teams are subject to constant overhaul and replacement. AI and automation continue to transform traditional I&O capabilities such as the service desk. The cloud-native ecosystem is flourishing, and the days of waiting six months for a server seem medieval. DevOps is not only climbing in adoption but also growing in its application across full portfolios. At the intersection of these trends, the semi-autonomous product team is emerging as the new basis of the digital economy. This leaves many wondering how the I&O organization is relevant.

Let me unpack this diagram a bit.

First, we need to discuss the definition of “I&O.” It’s an abbreviation that rolls off the tongue, and there’s a lot there to unpack. In fact, there are two dimensions in play:

Often, we hear “the I&O budget is too high.” (At Forrester, we have called this MOOSE: spending to Maintain and Operate the Organization, Systems, and Equipment.) Many Forrester customers have reported MOOSE spending of 70% and more, which we’ve argued is a Bad Thing. The above graphic, however, provides some indication of why. It shows how I&O has historically covered three of the four quadrants: infrastructure engineering and provisioning, application operations (help desk), and infrastructure operations (NOC).

This is a dynamic situation. Increasingly, application developers are comfortable with infrastructure-as-code (IaC) techniques and can self-provision, especially in highly automated cloud-native environments. This puts pressure on I&O’s traditional infrastructure engineering role.

Along the lifecycle dimension, the new rule is “you build it, you run it.” This displaces the traditional Tier 2 “application support and maintenance” function. It further may drive some reevaluation of the role of Tier 1 support. (Note that Forrester does NOT recommend eliminating the enterprise service desk or NOC. There are limitations to the build/run model. What if an issue can’t be localized easily to a given build/run team?) Trends toward self-service, left-shifting, AIOps, and so forth also put pressure on the traditional “operate” column.

So what does the future hold? While I&O is under pressure, I don’t think it goes away. I think it becomes “platform operations” and focuses on the lower levels of the stack. It also continues to provide coordination services. The new operating model looks something like this: 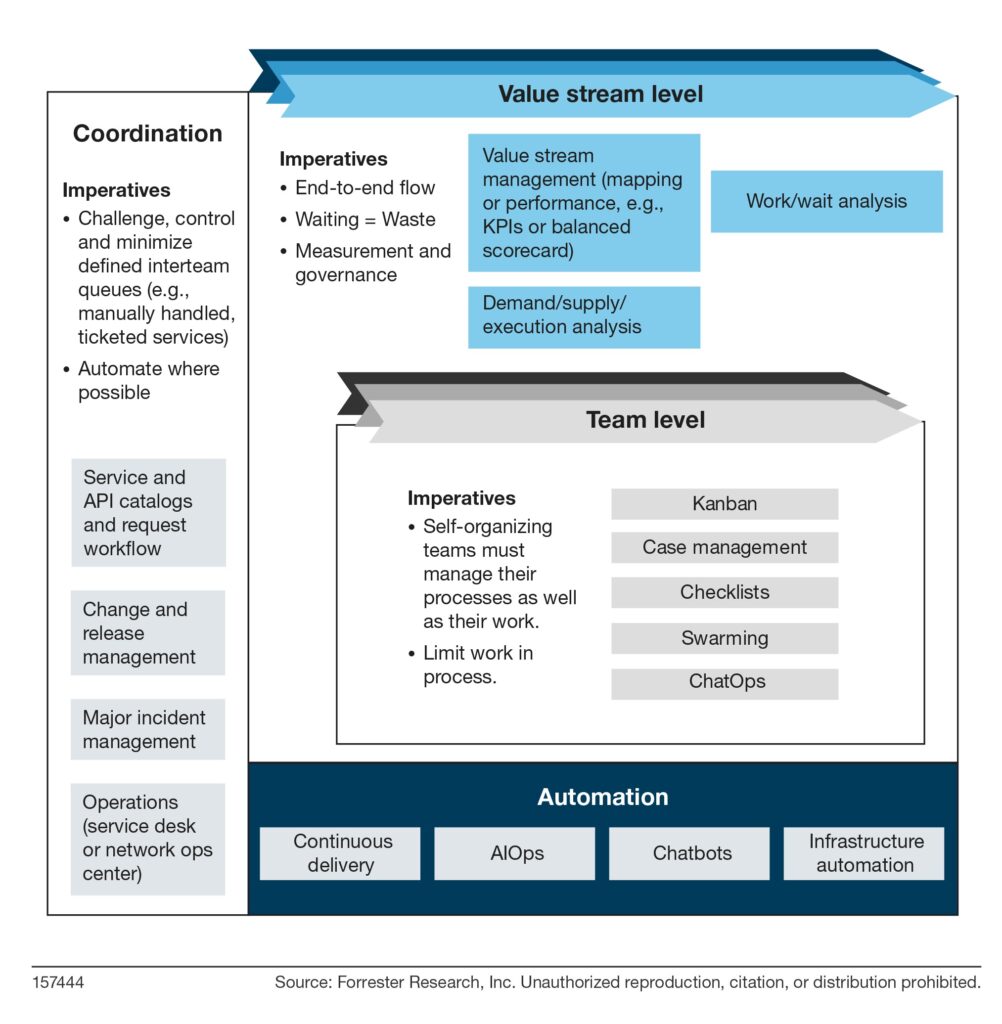 Notice that there is no longer an overarching lifecycle from left to right. This is because I predict that lifecycle-based governance will decline at the macro level. Instead, individual semi-autonomous teams own their plan/build/run lifecycles. They leverage coordination services, if and only if needed.

You can read more about the future of I&O in my reports, “Top 10 Trends That Will Shape Modern Infrastructure And Operations In 2020,” “Streamline Your Operational Processes With Lean And Agile Thinking,” and my magnum opus for 2019, “The Future Of Technology Operations.”