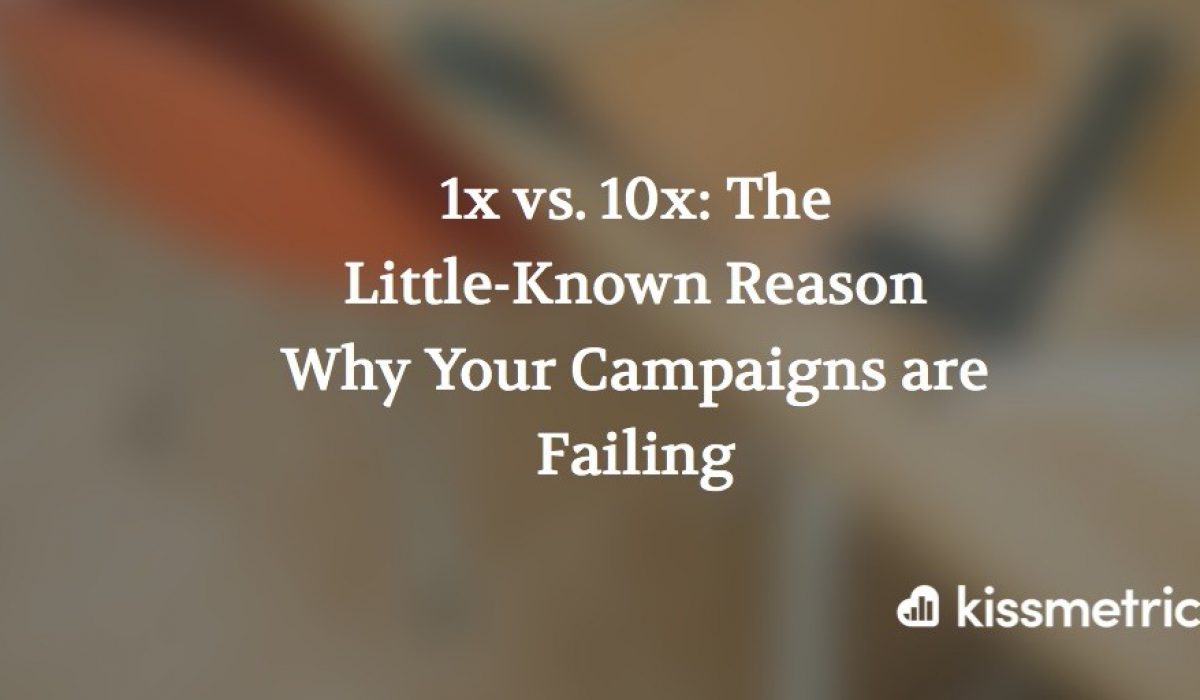 A/B testing works… some of the time.

And when it does, a 1% increase to show to bosses and clients is what you’ll get.

That’s a problem. Because how much time did that 1% cost you? How much effort did you exert chasing it?

All that time and effort, largely wasted, when you should have been ignoring the 1% increases and focusing on the 10% ones like these instead. Or leveraging your time 1x instead of 10x.

If you’ve got a big staff and a big budget, 1% might cut it. But not for everyone else. Not for you or me.

Here’s why. And how to fix it.

Why a ‘Middle Class Mindset’ is Sabotaging Your Marketing Most experts agree that there’s one critical difference between rich people and poor people.

It’s not inheritance. (Thanks for nothing, mom and dad.)

It’s not the stock market. (Because that’s glorified gambling.)

And it’s not real estate. (Because it can be a cost suck instead of an investment.)

Corny, right? Like some new-age, hippy, The Secret thing.

But there’s some truth to it. Here’s why.

“The first thing you have to do is decide to become a millionaire, multimillionaire, or billionaire if you want. … Then you must reinforce that decision, over and over,” according to a CNBC paraphrasing of sales expert Grant Cardone.

Grant is the author of The 10X Rule, which basically says most of our problems stem from the fact that we’re thinking (and therefore acting) too small. And too infrequently.

It’s not so much the pie-in-the-sky ideals. But the mental exercise that forces your daily activities to change course in order to meet a new ‘standard’.

He goes on to clarify, “Empowering questions cause you to reach for your full potential. The questions you ask yourself determine the results you get in life.”

And then brings it home with, “Millionaires are more creative than reactive.”

Author Steven Siebold equates this to a difference in worldview. A different understanding of the work ‘risk’. One group is playing offense while the other plays defense.

“Step out of your comfort zone. Look at all your options. You will have to be at least a little uncomfortable if you want to become rich. You might even have to fail and that’s great, because if you’re not failing, you’re not doing much.”

That warm and fuzzy ‘mindset’ difference is typically referred to as a middle class mindset. One that’s full of limitations and self doubts and ‘invisible scripts’ as Ramit Sethi calls them.

One classic? The “stop buying $4 lattes and avocado toasts to get rich” example. The problem with this one, though, is basic match. I don’t know about you, but I sure as hell don’t have 49 years. Hell — we work in technology. Most of us will have a heart attack by then.

The ‘middle class mindset’ is like the story of Icarus. Fly too close to the sun and you’ll get burned. Instead, keep plugging away at what you’re comfortable with. What comes easy. That way, you won’t miss Happy Hour on Friday.

You’d have a point. And you’d also be missing the point.

Because this same illusive ‘mindset’ phenomena applies to marketing as well. Even Seth Godin weighs in:

“The 10x marketer understands that the job isn’t to do marketing the way the person before you did it, or the way your boss asked you to do it. Strategic marketing comes from questioning the tactics, understanding who you are seeking to change and being willing to re-imagine the story your organization tells. Don’t play the game, change the game.”

The point here is that plugging away at tiny tactics — the ones that make a 1% difference instead of 10% difference — keeps you from doing the work the matters. The work that moves the needle.

And it’ll keep you firmly positioned in the (marketing) poorhouse.

I’ve personally seen this in my own work. Most of my failures (and there are LOTS to choose from) are the direct result of wasting too many hours chasing 1% improvements. When I should have been focusing on 10x ones.

That’s like tweeting once or twice a day. Not enough to ever break through the noise. Or dashing off 500-1000 word blog posts. Which simply doesn’t cut it anymore.

Skyscrapers: The Difference Between 1x vs. 10X Marketing

The Skyscraper Technique debuted only a few years ago.

And yet most (good) marketers know it by name. They’ve read the case studies. Experimented with it at least once or twice. Have read the initial article on the topic.

(Yes. It’s a Skyscraper about Skyscrapers. Because every good marketer Google’s 200 Ranking Factors: The Complete List. And how after executing this new technique, results took off. Look at those numbers. Up-and-to-the-right graphs that would make everyone unanimously agree.

And yet, that success shouldn’t be surprising. Not when you consider a few facts. Here’s Brian again with two key points about how search engines work.

(Yes, I’m laying all of the blame with Brian.)

So. You want results? You want 10x the benefits in new backlinks, traffic, and sales?

Just the simple act of blogging today demands it. A single blog post might take all day to write.

Want to write about increasing traffic? You better first do the amazing client work, then create processes to repeat it, then create custom graphics and videos to better explain that process to new people.

Want to write about hosting companies? You better sign up for each one, put up test websites, and monitor their performance for months before writing that review.

In other words, what’s the point of publishing a few random, ad-hoc 500 word posts when only excellence is rewarded?

Answer: there isn’t any.

Which is why you need to avoid 1x marketing ideas at all costs.

3 Ways to Avoid 1X, ‘Middle Class Marketing Mindset’ Once and For All

Last year, Unbounce published an epic Presidential Teardown of the two candidates campaigns (from a conversion standpoint), written by my writing man crush Aaron Orendorff (I mean that in a purely platonic way of course).

It’s been shared over 6,000 times. And been picked up by both Inc. and the Huffington Post (HuffPo, or whatever stupid name they’re going by these days).

The post was also over 6,000 words long. It tooks hours and hours and hours of research. They looped in influencers from the very beginning. Created a custom PDF for it. And even designed custom blog assets to fit the theme of the page. Not to mention a well-thought out, strategic distribution plan once the post went live.

In other words, this massive runaway success was no accident. It was created to be the single best resource on this topic. It was 10x from the get-go.

The problem, of course, is that producing something like this is insanely resource-intensive. Super time consuming. Not to mention, expensive when you consider the number of people all working together to make it a reality.

In other words, before you’re able to feasibly move forward on something this ambitious, you gotta free yourself up by cutting back in other areas.

Recently I had the privilege to interview Ty Magnin of Appcues with Brian Sun of Autopilot.

A recurring theme that kept popping up throughout his work and life was “fewer things done better.”

So he’d work on campaigns for weeks or months. Only to kill them off because the work wasn’t up to his admittedly high quality standards.

Their email newsletter was a perfect example. Initially, it was a long-ish email that contained a bunch of curated links and even a joke. But Ty wasn’t impressed with his own curation of the posts. He thought it was “a little weak.” It wasn’t excellent or best-in-class.

So he killed it off, instead switching their emails up to a simple text-only email when new blog posts went live. It’s not like the original email sucked or anything. But from Ty’s vantage point, it was merely average. And average isn’t good enough.

This change in format gave him back a few hours a week to devote to making something else excellent.

This is a point driven home by Perry Marshall’s 80/20 Sales and Marketing.

Ya’ll know the drill. You know how this works.

He asserts that there’s an “extreme inequality” is most things. Like your expenses, product defects, profitable customers, and of course, your marketing and sales activities.

The goal is to figure out which 20% of your day delivers the 80% of backlinks, traffic, signups, and purchases. Then continually exploit it.

Doing 10x, one-time, is good. You’ll see the benefit. But then the results will tail off. Revenue or traffic will regress to the mean.

But in order to do that, we just learned you gotta give something up. Like ditching hacks in order to chase scale.

We’ve also just seen that the ‘content quality bar’ is rising. Therefore, the time it takes to replicate is also rising. Which means you need to figure out a way to constantly refine your ‘content creation process’ in order to (1) continually increase the quality while somehow also (2) decreasing the time it takes to produce it.

If you had to do 2,000+ word posts daily (or longer), what would that require? What would need to change or happen in order to make that a reality?

You’d start by finding awesome resources and creating cheat sheets for yourself to save time on coming up with little, mundane things like a headline. You’d have to figure out workflows in advance, for how a piece of content transitioned from idea, to: At each step along the way, you’d have to drill down with checklists so that each ‘task’ took the least amount of time possible. No matter how minute.

That way, you could enlist more people to help and free yourself up to focus on where you excel within the process. Then your content production could look like a well-oiled machine, moving seamlessly from one step to the next. Pre-loaded with instructions, due dates, and responsibility assignments along the way.

Which would then force you to change the amount of work and effort and attention and output needed in order to make it happen.

We spend our whole lives learning to follow instructions. When instructions are only good enough to give you average. What worked before. Historically. In the past.

The stuff that gets you a 1% improvement over what you’ve been doing.

But if you’ve ever started anything new — no matter if it’s a project or a post or a position or a company — you’ll quickly realize that 1% is never good enough. You need 100x to make a dent.

The trick is to start out searching for the BIG improvements. Not because you’re self-deluded. But because it will require a BIG change in the stuff you’ll need to do in order to hit that lofty goal.

You’ll have to dissect and rearrange and reorient what’s possible in order to bring it into fruition.

Then, even if you fall short, you’ll still be miles ahead of 1% in the long run.