I am a firm believer in strategy before tactics. First you write the script, then you assign the roles.

Before you look at a piece of new technology, a new media channel or a creative idea for a PR stunt – think about the overall script and see what role this new thing could play.

But in the same way as Marlon Brando went from being appropriate for young hotspur rebel roles in On the Waterfront, to being a perfect calm strategic don in The Godfather, marketing tools can also shift roles over time.

Physical outlets, shops, have historically always played a role in distribution. “Place” in the Kotler vocabulary, “Physical availability” if you ask Byron Sharp. In the age of global ecommerce brands, however, shops can now be branding rather than distribution. As Rory Sutherland explains, in a world of abundant supply and limited trust, signaling being “for real” can have great value. It is a brand’s version of the peacocks lavish plumage: If I go to this extreme amount of trouble to draw attention to myself, what is beneath the feathers must be something good. “As seen on TV” was a classic example of this, but recently, opening a physical store attempts to achieve the same for digital outfits. Daniel Wellington, Warby Parker and Amazon are all examples.

On the reverse side of that development, search engine marketing used to be considered advertising (Promotion / Mental availability) but in a digital age is closer to distribution.

The role of awards

So different types of initiatives and activities within marketing change roles over time. One phenomenon that seems to have lost its original role is the advertising award circuit. Peter Field has done a lot of analysis over time and shown a declining correlation between a brands advertising award wins and its performance in the market. This means that the role of advertising awards as an indicator of value-adding creativity is no more. 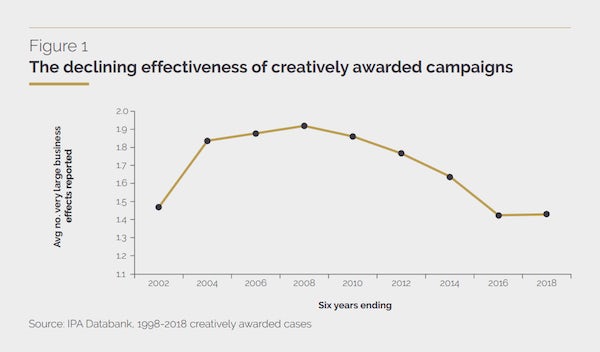 There seems to be two main trains of thought on why this correlation is vanishing. One centers around the short termism of advertising today, digitalization and lack of long term strategy work meaning we focus too much on immediate ROI rather than long term value creation. The other has to do with people in the advertising industry being overly focused on purpose driven advertising. The combination of these two trends mean we see short term purpose-driven stunts winning awards, rather than good old brand-building TVCs.

If there is anything we have learned from behavioural economics and the likes of Thaler and Shotton, it is that people do act based on gut feeling, and will keep doing so. There is little point arguing for how we think award shows should work – they will work in the way people in the industry work. Data from Dentsu’s CCS database shows that people who work in advertising in the UK are 58% more interested in buying from ethical brands than the population at large. They are 39% more concerned about the environment than the average joe. And short termism is a natural effect of the abundance of short term data, and the difficulty of finding good long term KPIs.

So where do we go from here? If award shows cannot tell us what is great advertising for driving commercial value, what good are they?

I do believe there is still a role, and that it is more related to the peacocking theory than anything else. It is a role related to employer branding, more than actual consumer branding.

It then becomes the responsibility of the agency or brand marketing department to rein in that creativity, to make sure it is constrained within strategic borders that make it commercially viable. And maybe for 2-3 projects per year, allow it to go bananas. Those efforts become investments to win awards, in order to recruit more great creative minds in the future.

In the long term, celebrating and showcasing socially responsible campaigns may also stir up more discussions on important matters on equality and sustainability, even if these campaigns have little traction in the marketplace today.

This is of course not the original purpose of the advertising award. And it is a shame for Peter Fields statistical models, and potentially a sign of marketing as a whole going down a dangerous path. But people will behave the way they do, and rather than trying to get geriatric Brando to play a dock worker with his shirt off, let him play the role he can play.