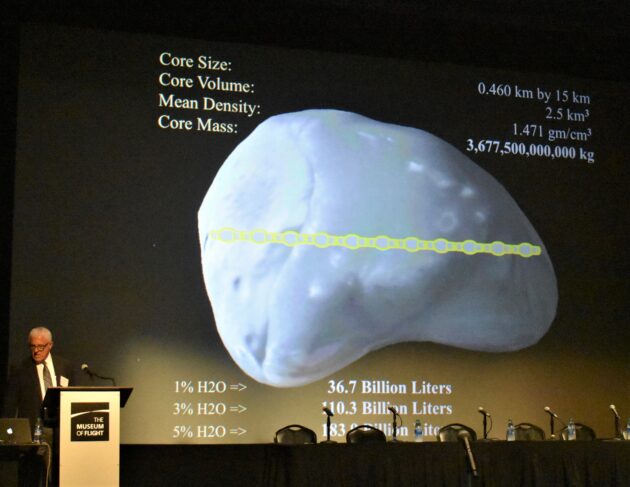 The smaller of Mars’ two moons, Deimos, was named after the Greek god of terror — but the way former NASA flight surgeon Jim Logan sees it, Deimos could be a comfort zone for space settlers.

“The Mars-facing side of Deimos is probably the most valuable real estate in the solar system,” Logan, co-founder of the Space Enterprise Institute, said today at Seattle’s Museum of Flight.

Logan laid out his case for Deimos during a conference on space settlement, presented this week by the Space Studies Institute to highlight the late Princeton physicist Gerard O’Neill’s vision for humanity’s expansion into the solar system.

O’Neill outlined his concept for free-flying space habitats in a 1977 book titled “The High Frontier.” The concept inspired a Princeton student named Jeff Bezos to pursue his own space dreams, even as he built Amazon into an online retail juggernaut and became the world’s richest individual.

Today, Logan said the classic O’Neill habitat wouldn’t be the best place to put an off-Earth settlement. Based on up-to-date measurements of the radiation flux in deep space, he estimates that it would take three times as much bulk as O’Neill called for to provide Earth-level protection to the inhabitants of the Island One habitat described in “The High Frontier.” That translates to a whopping 8.5 million tons of shielding.

Logan argued that the surface of the moon and Mars also would be ill-suited for long-term stays — again, primarily due to radiation exposure.

John Charles, who served a stint as chief scientist for NASA’s Human Research Program and is now scientist in residence at Space Center Houston, agreed that radiation is one of the top bugaboos for long-term spaceflight. “My colleague, Jim Logan, made a comment that I quote …  and that is, ‘We shouldn’t call it space, we should call it radiation,’ because that’s what there is out there,” Charles said.

An elevated risk of cancer is the most obvious impact of space radiation exposure. Charles said NASA is careful to limit the increased risk for its astronauts to no more than 3 percent. “It’s like going from being a non-smoker to a smoker,” he said. But for settlers on the moon or Mars, beyond the protection of Earth’s magnetic field, the risk would be greater.

And that’s not the only concern: There’s evidence linking cosmic radiation exposure to cognitive decline, bone degradation, a heightened rate of DNA repair and a revved-up immune system. Prolonged stays in reduced gravity conditions are also known to weaken bones and muscles, as well as eyesight.

So what’s the solution? To dodge long-term radiation exposure, settlers may have to dig deep. “They’ll have to live like ants, earthworms or moles,” Logan said.

He suggested excavating a miles-long tunnel straight through Deimos, which is thought to have a porous interior that’s easy to dig through. Logan hinted that SpaceX billionaire Elon Musk’s Boring Company could handle the job. The fact that Deimos is smaller and lighter than its sister moon, Phobos, could be seen as a plus.

At its core, a tunnel running through Deimos would provide far more protection from radiation than we Earthlings have. A chain of habitats could be installed inside the tunnel, with each habitat spun up around its axis to provide artificial gravity. Finding reserves of water ice would be another plus.

Settlers could send remotely operated robots to Mars for surface exploration. And eventually, similar habitats might be built inside Martian lava tubes.

How strong does gravity’s pull have to be to keep settlers and their children healthy? Logan said that’s a question that NASA hasn’t tried to answer.

“The private sector is going to have to do that, because NASA’s not interested. … It’s not in their charter, and I don’t blame them, even though I disagree,” he said.

Joe Carroll, president of California-based Tether Applications, has suggested setting up an experimental habitat that rotates on “trapeze tethers” in low Earth orbit to gauge the health effects of different gravity environments. (Check out Appendix B and C in this research paper for details.)

Solar arrays or nuclear reactors could be built on Deimos’ surface to keep the lights on inside the habitats, but what about food? NASA has been conducting a series of plant-growing experiments to assess techniques for producing space sustenance. Some scientists are even looking into algae farming in space.

Morgan Irons, a Cornell Ph.D. student who co-founded a company called Deep Space Ecology, said space settlers will eventually have to go beyond today’s hydroponic cultivation techniques and find ways to develop soil that’s suited for off-Earth agriculture. “We need an integrated system, or what I would call an integrated ‘field-ponics’ agricultural system,” she said. “A field system can support so much more plant diversity.”

Robotic farming techniques that are currently being pioneered on Earth could come in handy for future space settlers. In fact, autonomous robots may well be tasked with boring the tunnels and outfitting the habitats long before humans move in.

“I wasn’t that keen about robots before,” said Eva-Jane Lark, vice president of BMO Nesbitt Burns, a Canadian investment firm. “But I really think that robotics is going to be even more important to potentially create the infrastructure needed before people go to some of these places and before settlement can occur.”

What’s it going to take to get all this done? When asked that question, Logan basically takes on the role of Leonard McCoy, the “Star Trek” character who’s famous for saying “I’m a doctor, not a [fill in the blank].”

“Look, I’m a physician, and that’s why God made engineers,” Logan joked. “If they can’t figure that out, they have no business being engineers.”

For more about potential missions to Mars’ moons, check out this Lockheed Martin presentation on Phobos and Deimos as exploration destinations, plus this Planetary Society blueprint for sending astronauts to Phobos by 2033.