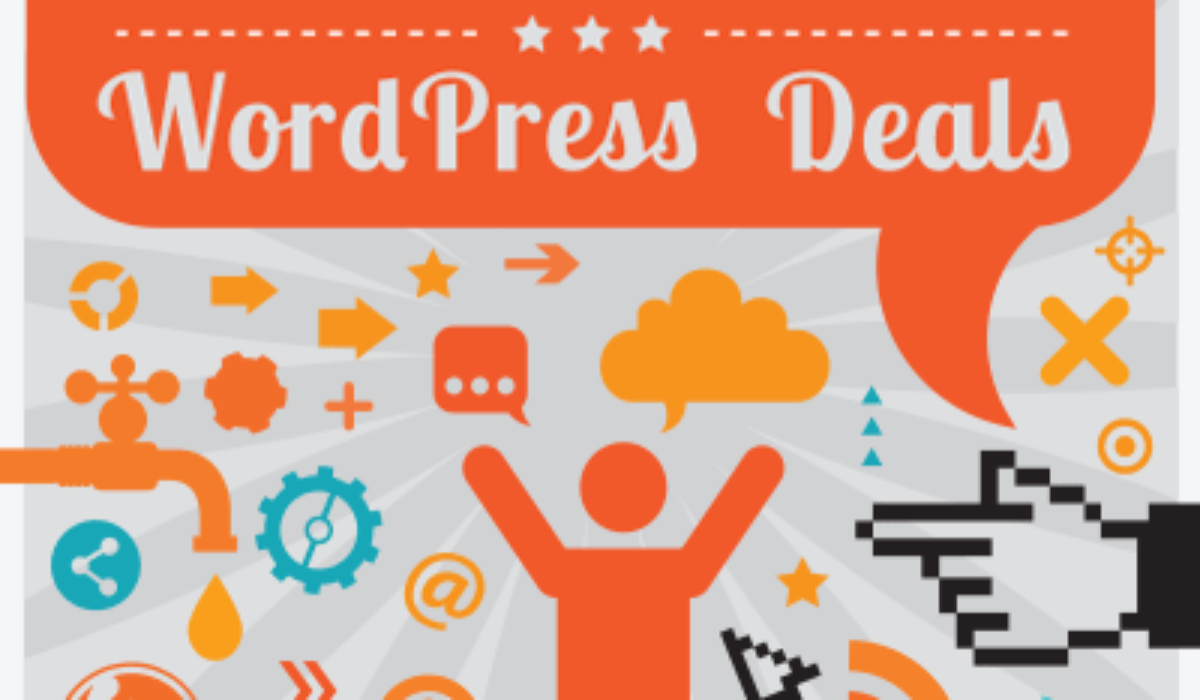 Thankfully, there are plenty of great free and premium caching plugins that you can use to speed up your WordPress site that aren’t named W3 Total Cache, which is the topic of this post.

I’ll start by sharing some of the reasons that cause people to go looking for alternatives to W3 Total Cache. Then, I’ll feature the plugins that we recommend as alternatives, as well as why I think each tool makes a good alternative.

I think there are a few different reasons most people look for W3 Total Cache alternatives, which I’ll try to address as I feature the other caching plugins in the next section.

First, there’s the complexity that I mentioned above. W3 Total Cache is, by a large margin, the most complicated WordPress caching plugin to configure. It just has so many features, and even as a person who uses/writes about WordPress for a living, I still find it overwhelming. I can’t imagine what it’s like for a casual user.

Now, if you’re a developer or power user who likes being able to tweak every little thing and set up more obscure caching methods, that might be great. But for most people, I think W3 Total Cache is just too complex.

BoldGrid recently acquired W3 Total Cache and has plans to improve the onboarding and configuration process, so there’s a chance this changes in the future, though.

If you purchase a premium plugin like WP Rocket, you can get dedicated premium support for a much lower price. So basically, if you want access to support, you can find much cheaper alternatives than W3 Total Cache.

Finally, there’s the performance. I don’t think performance alone is a reason to switch, as W3 Total Cache is quite effective if you’re able to configure it properly. However, I think it’s important to point out that W3 Total Cache is not the only way to get a fast WordPress site.

So with those drawbacks in mind, let’s dig into the best W3 Total Cache alternatives for WordPress.

Below, I’ll list the four best alternatives to W3 Total Cache. These are in no particular order, and I’ll recommend specific plugins based on certain scenarios at the end of the post.

WP Super Cache is one of the best W3 Total Cache alternatives if you value simplicity.

It doesn’t have as many features and configuration options as W3 Total Cache, but it’s also about as simple as you can make a caching plugin (though I will feature some that are even simpler!).

To use it, literally all you do is enable the plugin and select a radio button. Then, you’ll already be benefiting from page caching. 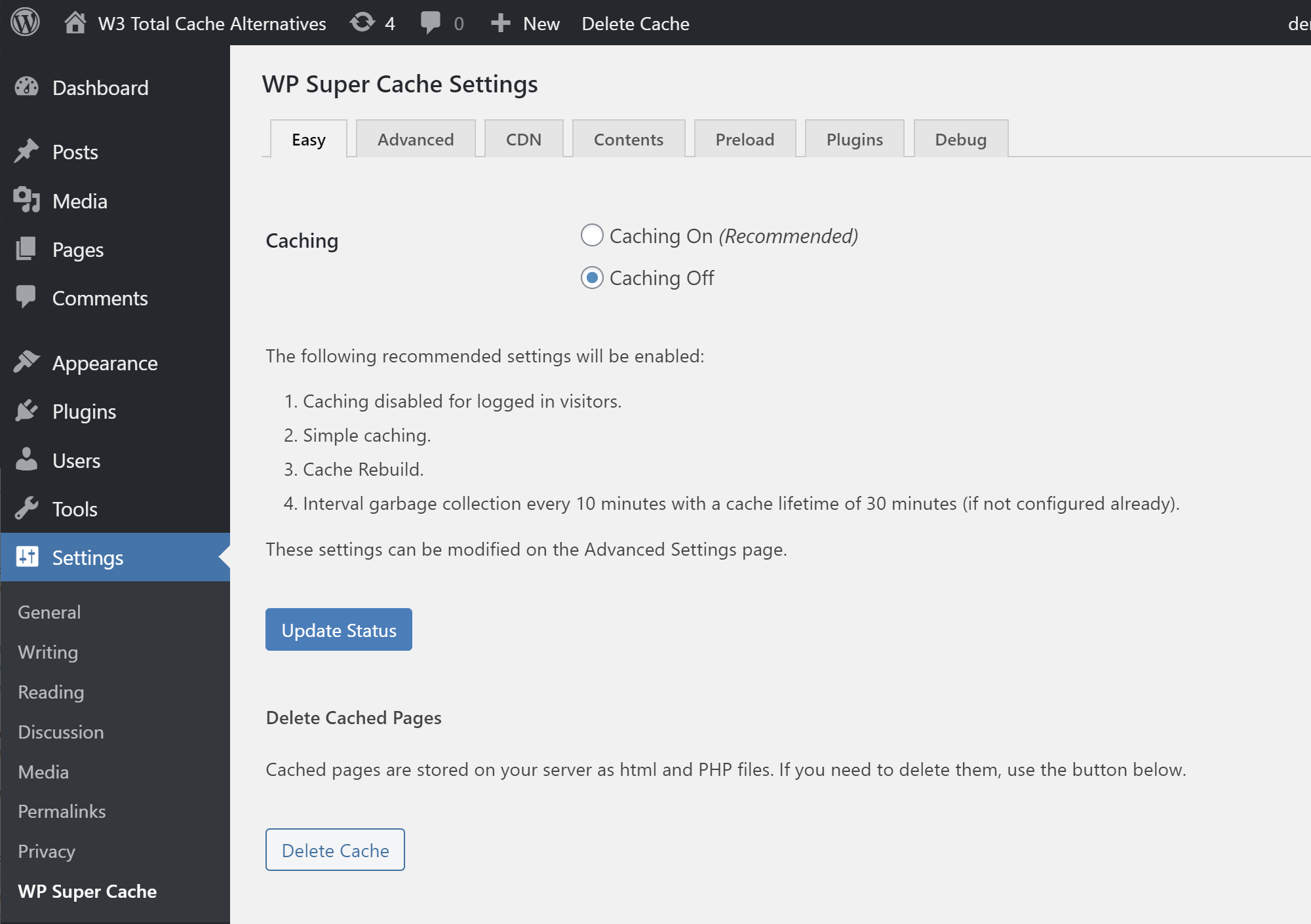 If you want to get your hands dirty, there’s also an advanced settings area where you can configure other features like:

WP Super Cache does a good job of marking which features are recommended and which you can ignore.

Still, WP Super Cache does not come close to the depth of functionality that you get with W3 Total Cache. So if that’s important to you, you might prefer a different plugin.

WP Super Cache is 100% free and comes from Automattic, the same company behind WordPress.com and WooCommerce. The one downside is support. While the plugin is very simple and you’re unlikely to hit issues, most of the support threads in the WP Super Cache WordPress.org support forum go unanswered.

I said WP Super Cache is about as simple as you can make a caching plugin, but WP Rocket somehow manages to make things even simpler by eliminating the need to even click a button.

As soon as you activate WP Rocket, it automatically starts speeding up your site with page caching, Gzip compression, browser caching, and a few other performance tweaks. So from a simplicity perspective, WP Rocket definitely wins out against W3 Total Cache.

WP Rocket doesn’t offer some of the non-standard caching methods, like object or database caching, but it does come pretty close to W3 Total Cache.

It also offers some features that W3 Total Cache doesn’t have like:

Finally, there’s support. All WP Rocket users get premium support. So if you want to reach out for help, you have that option.

The only downside vs the other W3 Total Cache alternatives? WP Rocket isn’t free — it only comes in a premium version.

Plans start at $49 for one year of support and updates for a single site. That includes a 14-day money-back guarantee, so you can try it out at no risk to your wallet.

If you want to learn more, you can check out our full WP Rocket review.

WP Fastest Cache is pretty close to WP Rocket in terms of its approach.

It offers a similar level of simplicity — you can just check a box to start benefiting from caching. But it also offers plenty of advanced features if you want more than just basic page caching.

Like WP Rocket, WP Fastest Cache can get you a lot of the most important features from W3 Total Cache. For example:

With the premium version, you even get access to built-in image optimization and database optimization, which are two features that W3 Total Cache doesn’t offer.

I don’t find WP Fastest Cache to be as easy to use as WP Rocket. But from a feature perspective, it’s another good option that comes close to the depth of functionality that you get with W3 Total Cache.

You can start with the free version at WordPress.org. If you want the premium features, a single-site license starts at $59.

Cache Enabler is a simple, but speedy, caching plugin that makes a great option if you’re overwhelmed by the number of settings in W3 Total Cache. I’ve personally used it on a number of sites and find it offers stellar performance despite its simplicity.

It starts caching your content as soon as you activate it and these are literally all of the settings:

So yeah, it’s definitely not close to W3 Total Cache from a feature-parity perspective. But it’s a really solid option if you just want a lightweight WordPress caching plugin.

Cache Enabler is 100% free and comes from KeyCDN, a popular CDN service.

Which Is the Best W3 Total Cache Alternative for You?

To finish things out, let’s recap how to choose the right caching plugin for your needs based on some different scenarios.

First, if you’re looking for a simpler alternative to W3 Total Cache, then all four of these plugins offer a simpler approach. Really, I don’t think you’ll go wrong with any from a simplicity perspective, though there are some differences:

If you’re looking for something that can match (or at least come close to) the depth of functionality in W3 Total Cache in a simpler package, I think the two most feature-rich alternatives on this list are:

While neither offers the sheer number of caching options that W3 Total Cache has, both do offer plenty of advanced features like cache pre-loading, file optimization, CDN support, and more.

Finally, if you value support, then I think WP Rocket is your best bet. For just the price of a $49 license, you get access to one year of quality human support, which is much cheaper than paying for W3 Total Cache’s support.

WP Fastest Cache also offers support on its premium plans, though I’ve personally never interacted with its support team so I can’t comment there.

Both WP Super Cache and Cache Enabler are exclusively free solutions, so you won’t get premium support with either of them. With that being said, KeyCDN does a good job of responding to most requests at the WordPress.org support forums for Cache Enabler.

However, Automattic does not seem to respond to most requests in the WP Super Cache support forum.

Used/using any of these W3 Total Cache alternatives. Thoughts?

Colin Newcomer is a freelance writer and long-time Internet marketer. He specializes in digital marketing and WordPress. He lives a life of danger, riding a scooter through the chaos of Hanoi.