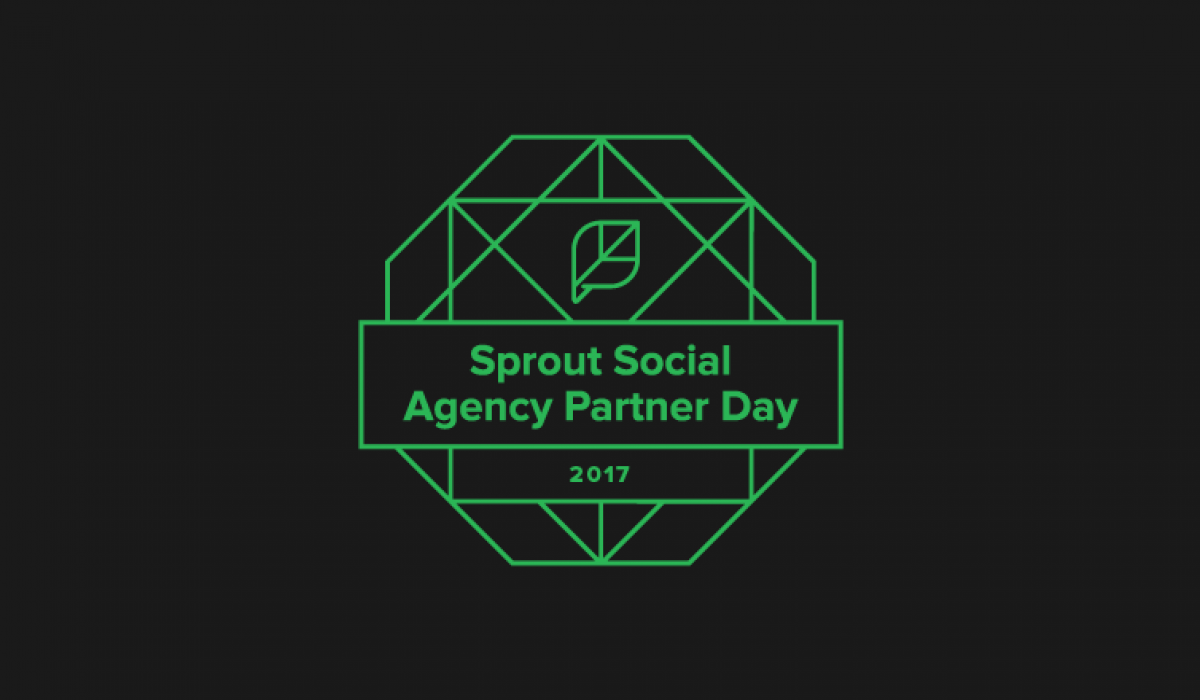 Last Tuesday, we held our first ever Agency Partner Day, a labour of love put on by Sprout’s Agency Partner Program. Over 100 of our agency friends gathered at Sprout HQ for a little more than networking. This event was built to support our agency partners and to further bring them all of the tools, resources and communities they need to grow and excel as a social media agency. We also wanted to give them a space to tap into one another’s experiences—both professional and personal. It was a day about them and their stories.

As a Content Specialist on the Marketing team, I’m not intimately woven into the fabric of our Agency Program, so I was a little unsure what would resonate with me. But I’ve attended enough Sprout events to know that they’re populated with great people, provocative ideas and collaborative communication. I was pumped.

I arrived early, like other Sprout employees attending, helped set up (by helped I mean I quietly ate snacks while the events team set up) and took in the view:

I had already had conversations with our team about Agency Partner Day and the details that surround it, so I had a solid idea of what the event was about. But when partners began filtering in—jovially greeting one another, striking up conversations, diving into their event gear—they seemed so excited about what was on deck for the day. And suddenly, so was I.

Our CEO, Justyn Howard, kicked the day off, acknowledging the symbiotic relationship between an agency and social. It’s always refreshing to be reminded of why we do what we do, and today was no different.

Our mission is to help organizations of all sizes become better marketers and create the world’s most beloved brands.

“You are our champions in the industry” couldn’t agree more! @Justyn speaking to our #sproutpartner family #SproutPartnerDay @SproutSocial pic.twitter.com/Srg06VScBs

There were so many thoughtful presentations, it’s hard to encapsulate how much insight each one provided. Lucas Vandenberg, Managing Partner at Fifty & Five, spoke to tracking KPIs and really identifying areas of ROI, which was a hit with the crowd.

It made sense that on the heels of gaining some KPI knowledge the team had planned a strategy building workshop. The gist was partners would split up into small groups and each would get a use case. Their job? Convince and educate a skeptical client that social can bring them ROI and determine the KPI.

It was a refreshing break to interact with one another and observe a room of partners apply their expertise to a challenge.

Spencer Smith shared his #1 lesson from his music days—go where a scene already exists and make yourself valuable. He backed this up with something he called ‘The Summerfest Effect,’ explaining that the same rules that apply to booking a sought after slot at a music fest apply to business—envision a daunting goal, be bold enough to ask how to get there, then take the steps necessary to achieve it.

BAM! @spencerXsays used to be in a band.

Our own Patrick Cuttica, Director of Product Marketing, gave everyone an inside glimpse of what’s new and next for Sprout, which sparked a surge of tweets and love from our partners, while Sprout’s Ryan Barretto, SVP of Global Sales, talked growth tips for agencies looking to expand.

Me listening to all the new exciting top secret stuff @SproutSocial is coming up with next! #sproutpartnerday pic.twitter.com/nHsu2rXPEM

Sprout’s VP of Strategy & Brand Engagement, Andrew Caravella, shared a stat that was simultaneously surprising and not so surprising—43% of digital marketers say social is their most effective tactic, 49% say it’s the most difficult. Exemplifying that while proving the value of social is beginning to fade, leveraging it to it’s fullest potential is still a bit of a head-scratcher.

My big takeaway from Andrew’s talk was that despite social being a digital industry, it’s still a human-to-human business. The hurdles we’re trying to jump in order to get the most out of our social efforts are based in reminding ourselves that everything we do in this industry is for people.

Twitter’s Lead of Data Partnerships, Eric Martin, has conversations with brands everyday about how to leverage Twitter for business. He reminded us that Twitter is where the world comes to connect, celebrate, share and mourn. And brands who actively respond to customer issues on Twitter find that customers are willing to spend up to 20% more per transaction. It was abundantly clear that there’s no excuse for brands to overlook the opportunity to respond and interact with consumers on social.

This conveniently coincided with #SproutPartnerDay starting to trend on Twitter, as well as on Chicago’s Instagram story.

Brooke B. Sellas is a ‘real talk’ kind of person. As the first Agency Partner up to address the group and founder of B. Squared Media, she convinced us of the importance of planning, planning and more planning.

In the early stages of her career, Sellas says she looked at the people she was connected with on social and leveraged those relationships. She’s documented everything and revealed to us her “secret sauce” for business growth: process, planning, people and pace.

I was impressed with the takeaways here and with hearing Sellas’s personal story of the uphill battle of creating her own business. This transparency was something that many other agencies at the event were incredibly thankful to hear as they are struggling with the same challenges in growth.

.@madSMscientist talking about scaling your agency at #SproutPartnerDay 🙌 “Mind your P’s” to grow your agency. pic.twitter.com/7Hhmu6OiQi

Social Media Consultant and Founder of SocialCompass, Jared DiVincent, said he’d learned a lot since signing up to speak and, if asked today to summarize his talk, he’d change it from Leveraging Advocacy to Build Stronger Retainers, to simply Listen, Learn & Adapt.

While he did go in-depth about the value of employee advocacy and advocacy tools, the main takeaway from DiVincent’s talk was his encouragement to adapt to what’s happening in the marketplace and to find happiness in the work we do. He spoke about the winding paths most of us have taken to marketing and social, reminding us that he himself traded a career in commercial real estate for a job handing out brochures at a gondola visitor booth and eventually went on to build the agency he owns today. So DiVincent knows a thing or two about adapting and what partnership means in all of that.

With how quickly our industry changes and how quickly you have to adapt, having a partner allows us to stay ahead of the curve. It’s essential to our growth as an agency.

DiVincent’s advocacy talk convinced me that despite agencies investing more and more in advertising, it isn’t necessarily working in their favor any longer, with 92% of consumers taking word of mouth marketing over ads.

So they’re adapting, much like we do in our own lives, to try new things because it can expand reach in organic and lasting ways.

His outgoing spirit came through in what he was telling us and they were sentiments I found value in and could apply to my own work, regardless of role or industry. There was something for everyone in this story.

With the presentations capped off, what became my favorite portion of the night began when a panel of three mighty and spirited women took the stage: Krista Whitley, founder of Social Media Unicorn, Crystal Montufar, Operations Manager at Friendemic and SSPR‘s Director of Social Media, Katrina Jacobsze.

Two standout conversations between the experts emerged: one focused on the delicate balance between the concierge aspect of being an agency and setting boundaries to ensure you scale efficiently, and another about how to create the ‘aha!’ moment for clients.

“Clients become respectful of boundaries set,” Whitley said. “Identify what makes your agency unique. That value that you bring is what will keep you with them and make you a trusted advisor.”

She ended her response with a quote she said they like to use at her organization (one I would love to apply to more conversations in my life):

Ideas are pawns, execution is king.

Jacobsze feels that ‘aha!’ moment from clients falls on being a thought leader in the industry, “You have to be your own newsroom,” she said.

She went on to say something that tied it all together for me giving me a clear and powerful sense of why all of us are here:

“We believe in a genuine connection between your brand and your customers. Social media is a human-to-human business and how we communicate with one another continues to evolve.”

Our Own Partner Oscars

There’s no better way to express appreciation than to honor our partners for their remarkable efforts in the industry.

Partners from a variety of agencies walked away with plaques honoring their work in selected categories.

As our own Agency Business Development Lead, Tara Robertson, noted, if we could give an award to everyone, we would. But in order to show our deepest appreciation to the partners, the team identified a number of categories and used performance metrics, as well as submitted campaign materials to make the very tough decisions.

From the ‘Happy Clients, Happy Partners’ award to ‘Social Campaign of the Year’, the winners spanned every type and size of agency and hailed from all over the world.

Happy Clients, Happy Partners – SocialCompass
Always Be Growing – Cosmitto
Sprout Partner MVP – Whiteoaks
Social Media Campaign of the Year – Digital Natives
Partner of the Year – to be announced at the end of this year.

A big congratulations to all the winners! You are changing an industry we all love.

One of the day’s most memorable developments for me was the enthusiasm for the collaborative exchange of ideas. As Tara pointed out, it didn’t feel strange to see these agencies—competitors in the industry—sitting next to one another, dishing tips for success, sharing in their triumphs and downfalls and asking hard questions of themselves and each other.

We’re all open books and something that was keenly clear at the end of Agency Partner Day was that the support of one team to another is what contributes to our communities’ successes.

Lest you think the day ended in hugs and high fives at Sprout HQ… au contraire! After a full and satisfying gathering of sharing experiences, everyone was eager to unleash our competitive sides and hit the tables at Chicago’s ping pong social club, SPiN.

It was the perfect opportunity to get to know one another in a more relaxed setting and ask questions one on one.

Partners mingled and continued to learn from one another, while kicking each other’s butts in a ping pong tournament.

Nope, I refuse to accept that it’s over.

Tomorrow marks the first day of planning for #SproutPartnerDay 2018 pic.twitter.com/igmwkS5ge5

This was just the beginning of what’s to come for Sprout’s Agency Partner Program. Only three months into this initiative and it’s already a productive and collaborative community amassing a network of hundreds of partners and counting.

Among many things, our first Agency Partner Day struck me as an opportunity to see how different people, with different professional ethics, approaches and objectives, work toward the same goals. That’s what I call progress.