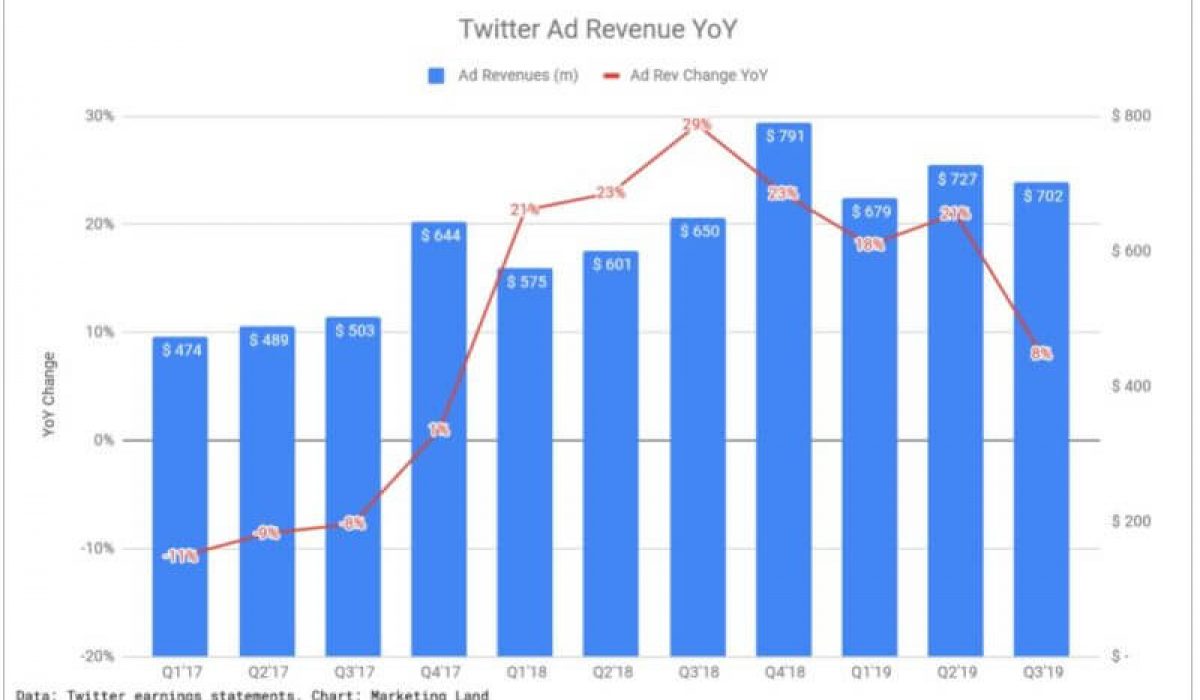 Twitter reported $702 million in ad revenue for the third quarter of 2019 Thursday, an increase of just 8% year-over-year. Twitter’s total revenue for the quarter was $824 million, up 9% from the prior year, with a net margin of 4%, compared to 14% a year ago. Daily users on the platform continue to tick up.

Slow but steady user growth. Twitter’s mDAUs (monetized daily active users) increased by 17% compared to the prior year, up from 124 million to 145 million. U.S. mDAUs grew by 15% year-over-year to 30 million, up from 26 million.

On a quarter-over-quarter basis, mDAUs grew by just 4%. A trend similar to Snap which also reported 4% growth in DAUs during the third quarter of 2019 to 210 million.

This is the third quarter Twitter has reported the mDAU metric. The company decided in February to focus on authenticated users it is able to show ads to and moved away from the monthly active user (MAU) metric after it saw a noticeable slide in MAUs after efforts to purge spam accounts from the platform.

Why we should care. Arguably, the most concerning detail for advertisers coming out of Twitter’s third quarter earnings report are the reported issues with its Mobile Application Promotion product (a suite of products designed for app marketers on the platform) and personalization and data settings.

In its letter to shareholders, the company said it discovered — and took steps to fix — a bug that affected its Mobile Application Promotion product which impacted Twitter’s ability to target ads and share data with measurement and ad partners. “We also discovered that certain personalization and data settings were not operating as expected,” wrote Twitter.

The company expects the ad product issues will have an even greater impact on its fourth-quarter results, causing four or more points of reduced year-over-year revenue growth. “The increase reflects a full-quarter impact in Q4 vs. only a partial-quarter impact in Q3,” Twitter said.

Amy Gesenhues is a senior editor for Third Door Media, covering the latest news and updates for Marketing Land, Search Engine Land and MarTech Today. From 2009 to 2012, she was an award-winning syndicated columnist for a number of daily newspapers from New York to Texas. With more than ten years of marketing management experience, she has contributed to a variety of traditional and online publications, including MarketingProfs, SoftwareCEO, and Sales and Marketing Management Magazine. Read more of Amy’s articles.