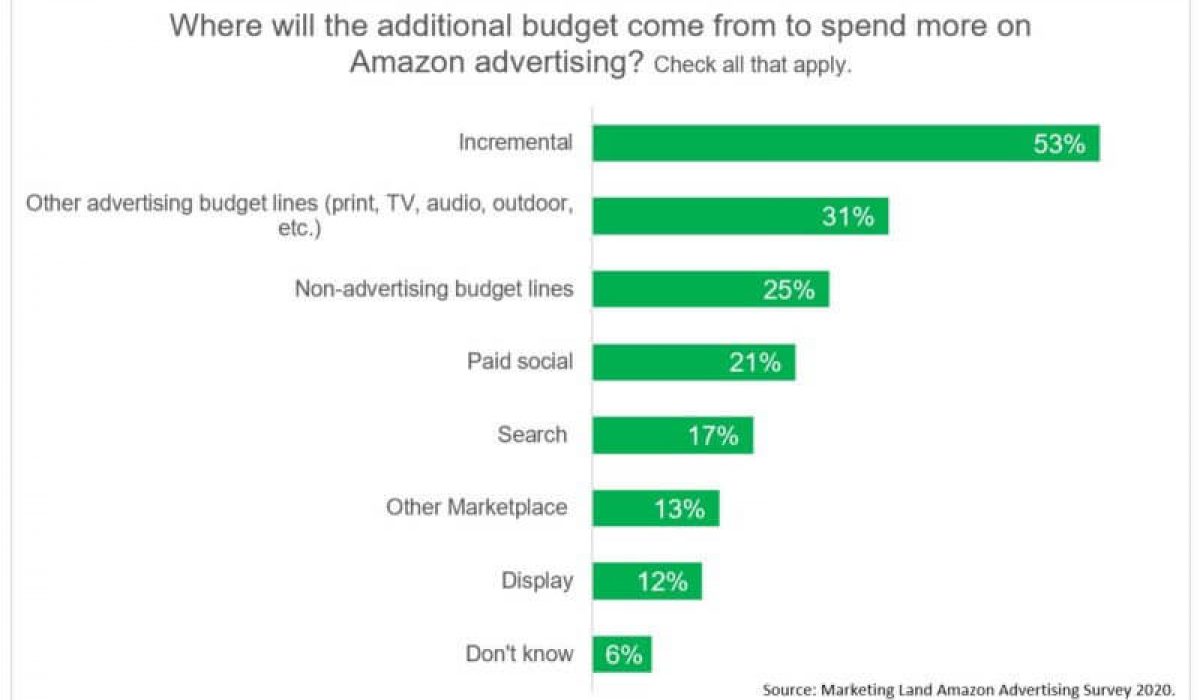 SAN JOSE – Eighty-one percent of current Amazon advertisers plan
to increase their ad spend on the platform in the coming year, according to a Marketing
Land survey of digital advertisers released Wednesday.

These growth expectations are in line with the trends we saw forming in our last survey of Amazon advertisers in 2018. Amazon’s ad business grew 40% year-over-year in 2019, to roughly $14 billion, but it is still very early days for the platform. (For some perspective, Google raked in $135 billion in ad revenue last year, but its growth has slowed.)

Highlights from the survey, representing responses from the 155 marketers who said they’re currently running Amazon ad campaigns, were presented at SMX West on Wednesday morning.

Incremental budget increases. More than half of the advertisers planning to increase their Amazon advertising budgets said the increases will come from incremental sources, followed by 31% who said the additional funding will be pulled from non-digital advertising budgets. Paid social and search budgets are affected, but less so, with 21% expecting to pull from paid social budgets and 17% from paid search.

Potential for growth. The majority of the Amazon advertisers surveyed (66%) dedicate less than a quarter of their annual digital advertising budgets to Amazon, and 34% spend less than 10% of their digital ad budgets on Amazon.

Among the advertisers surveyed, 16% do not sell products on Amazon but run display and/or video campaigns (managed or self-serve) via Amazon DSP, while 39% sell on Amazon via Seller Central (1P), 14% sell via Vendor Central (3P) and 30% sell via both programs.

Video is certainly an area of opportunity. Video has the lowest adoption among Amazon’s ad products, via either self-service (31%) or managed service (28%).

Stores pages. Amazon has said it is focusing on attracting brand advertisers to the platform, highlighting Stores and organic Posts (in beta) tools to help “customers discover products and brands.” Higher adoption of Stores pages was reflected in this survey, with 67% of Amazon advertisers saying they or their clients already have a Stores page. Another 18% plan to set them up in the next 6 to 12 months.

However, when asked about challenges, a quarter of respondents said proving their campaigns are working was among their biggest obstacles.

Challenges. Optimization tactics, inadequate reporting and getting support from Amazon client services ranked as the top three challenges advertisers said they have with running campaigns on the platform. And though Amazon has worked to streamline its ad offerings, 25% also said navigating the advertising options is a challenge.

Frustration with optimization tactics on the platform might be part of the motivation for advertisers to adopt third-party management tools. Twenty-nine percent of advertisers said they currently use a third-party tool for managing Amazon campaigns (up from 22% in our survey two years ago). Another 31% said they plan to do so in the next 6 to 12 months. Ignite, Kenshoo, Pacvue, Seller Labs and Sellics were named most frequently by those currently using tools for management.

Other marketplaces. Less than a third (30%) of those advertising on Amazon said they are not selling on other marketplaces. Nearly 40% are participating in Google’s relatively new Shopping Actions program (39%), the cost-per-sale program that enables users to check out with payment credentials stored in their Google accounts. EBay ranked second with 32% of Amazon advertisers also selling on that marketplace, while 22% are selling on Walmart Marketplace. That number could trend up as Walmart focuses on building up its marketplace advertising business.

Ginny Marvin is Third Door Media’s Editor-in-Chief, running the day to day editorial operations across all publications and overseeing paid media coverage. Ginny Marvin writes about paid digital advertising and analytics news and trends for Search Engine Land, Marketing Land and MarTech Today. With more than 15 years of marketing experience, Ginny has held both in-house and agency management positions. She can be found on Twitter as @ginnymarvin.