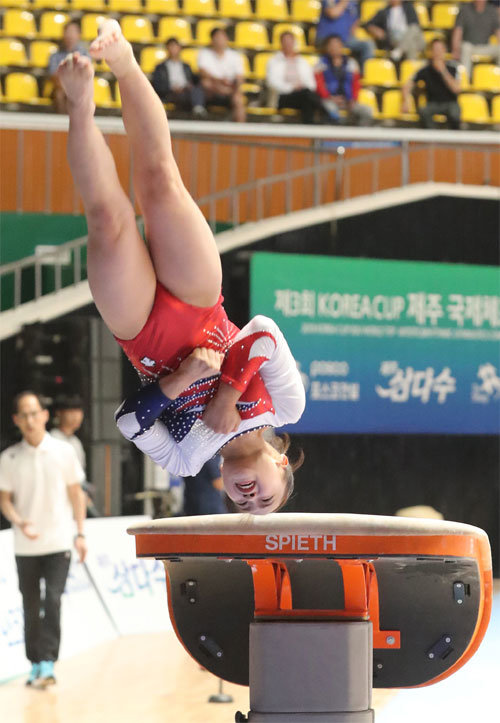 South Korean vault phenom Yeo Seo-jeong, 17, successfully landed a new element, raising the prospect for a medal at the 2020 Tokyo Olympics. Yeo scored an average of 14.817 to win the gold medal in the women’s vault competition at the Korea Cup held at Halla Gymnasium on Jeju Island on Wednesday.

In the presence of her legendary gymnast father Yeo Hong-chul, Yeo Seo-jeong successfully landed a new move, where she hurdled onto a springboard and rotated 720 degrees in the air. Despite a 0.1 penalty from a shaky landing, Yeo got 15.100 points with a difficulty score of 6.2 and an execution score of 9.0 in her first attempt. Yeo scored 14.533 in her second try, overtaking Oksana Chusovitina of Uzbekistan to win the gold medal.

Yeo, who had been performing skills with the difficulties of 5.8 and 5.4, raised her chance on the podium at the Tokyo Olympics by successfully performing a new move. “When trying a new move, the International Gymnastics Federation (FIG) considers it successful if a gymnast does not fall on the ground and successfully lands it. The video of Yeo’s performance will be submitted for eval‎uation by the FIG and they will determine the difficulty of her new move,” an official from the Korea Gymnastics Association said.

If Yeo’s new skill is recognized by the FIG, both she and her father will have their original elements listed in the FIG Code of Points. Yeo Hong-chul already has his original elements called “Yeo 1” and “Yeo 2” listed in the Code of Points. “I expected a great result as my daughter landed her new element many times during the practice,” said her father. “I’m so proud of her because she has improved so much from the 2018 Asian Games in Jakarta and Palembang.”