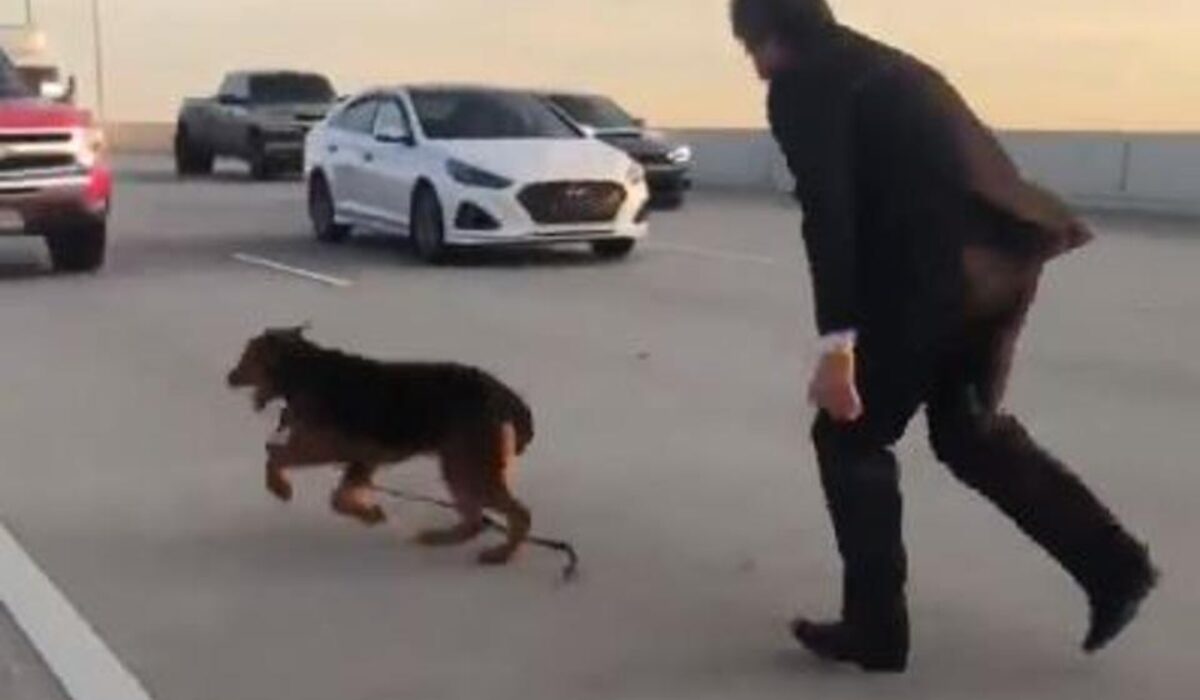 Imagine you’re driving down a Texas freeway only to come across a dog with its leash running along the side of the road.

That’s what Toby Tinelli encountered in Houston Sunday evening on Beltway 8 near Highway 90.

“We were in the first wave of vehicles that saw the dog running and every car immediately put their flashers on and began slowing down to try and help,” the oil and gas salesman told me. “A few cars tried to navigate the dog to the shoulder and block it in so they could grab it, but the dog kept running. Eventually, a group of about seven vehicles made a circle surrounding the pup and slowed down to help the dog stop and be caught. That worked and the dog ran back towards traffic and several people got out of their cars to slowly corral her and let us get ahold of her leash.”

Parts of the event were captured on Tinelli’s camera phone.

WARNING: Caption and audio of the video below feature strong language.

The dog had escaped from her owner’s grasp following an accident, according to Tinelli. Once she started sprinting down the highway alongside the cars, the owner cashed after her.

“He had been running on the shoulder chasing after her,” Tinelli told me. “He looked exhausted but very relieved that he had his baby back.”

For an urban city in a state known for the highest rates of highway fatalities in America, Tinelli said everyone behind the first line of slowed cars cashing the dog was very understanding.

“It was amazing how calm and patient everyone was to allow traffic to come to halt in the middle of one of the busiest highways in Houston,” he told me. “Everyone just wanted to get that dog to safety and off the road.”

“I am so proud of my community and city for coming together like this,” he told me. “There are so many good people out there and sometimes things like this are a great reminder of that.”

As of Friday, Tinelli hasn’t learned the identity of the dog or the owner, but he wishes to be connected to make sure the pup is doing okay since its paws got slightly cut up from the highway concrete.