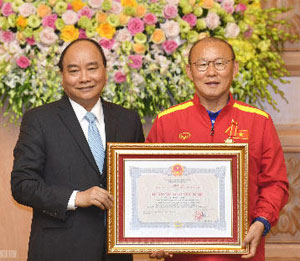 The Vietnamese prime minister has honored Korean football coach Park Hang-seo for leading Vietnam to victory in the ASEAN Football Federation Suzuki Cup for the first time in 10 years.

Prime Minister Nguyen Xuan Phuc invited Park and the athletes to his government office on Friday and awarded him a friendship medal and first-class commendation.

He added that Korean President Moon Jae-in sent a letter of encouragement to Park and his team, and that the two countries’ people have become closer.

Park said the team’s triumph is a victory for the entire Vietnamese people and vowed to prepare fully for the upcoming AFC Asian Cup, which kicks off in the UAE next month.