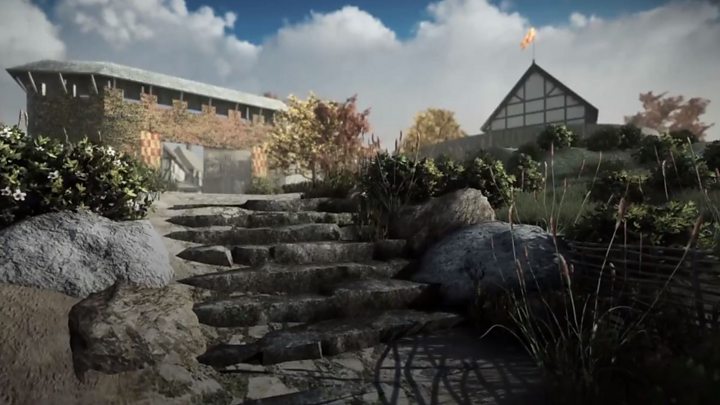 Virtual reality is being used to help people take a look inside the home of the Welsh prince Owain Glyndwr.

Born in 1359, he was the last native Prince of Wales and led an uprising against England.

Nothing remains of his fortified residence near the English border at Sycharth in Powys.

But now his home has been recreated for a video tour based on details given in a medieval Welsh poem by the bard Iolo Goch.

And he considered how the homes of local lords like Glyndwr were constructed.

“They were comfortable and well-appointed but these were turbulent times and they also had to be easily defended against attack so there would have been wooden palisade walls and a ditch and towers as well,” he said.

Visitors to Gwyl y Fflam – Festival of Flame – in Corwen, Denbighshire, will be able to look around Glyndwr’s home with the help of the virtual reality video this weekend.

The town has its own links to the prince – another of Glyndwr’s homes was in nearby Glyndyfrdwy, which is still known as Glyndwr’s Mount, where he was proclaimed Prince of Wales.

“It should be a fantastic occasion and a real celebration of the life and times of Corwen’s most famous son.”

Who was Owain Glyndwr?

Owain Glyndwr was the last native Welsh person to hold the title Prince of Wales.

He was born in 1359 into a powerful family of Anglo-Welsh nobility, during a time of relative peace between the tribes of Wales and the English aristocracy.

Military service called Glyndwr in 1384 and he enlisted under Sir Gregory Sais in the Marches area, the border country of England and Wales.

On 16 September 1400, Glyndwr instigated the Welsh Revolt against the rule of Henry IV of England.

A group of Glyndwr’s supporters proclaimed him Prince of Wales at Glyndyfrdwy.

Although initially successful, the uprising was eventually put down but the prince became a figurehead for Welsh nationalism.