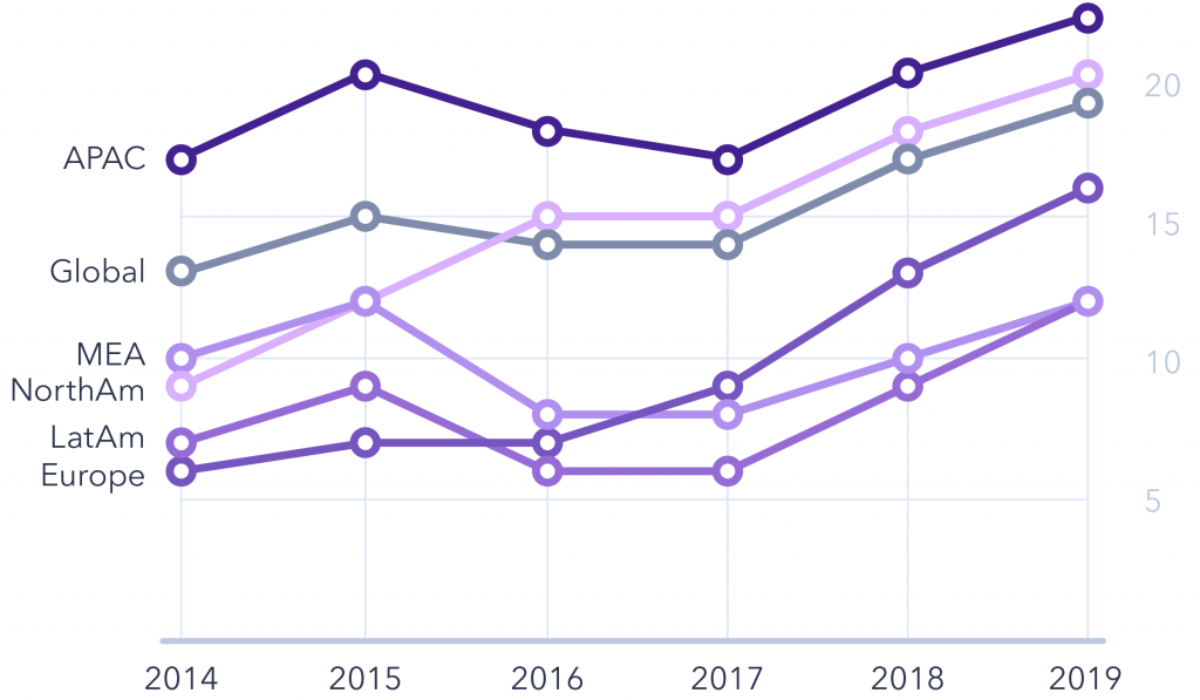 Wearables: once a show of status, now a device relied upon by many to monitor their health.

The World Economic Forum recently predicted the Fourth Industrial Revolution. Humankind is on the brink of a new phase – where our digital, physical, and biological systems will soon begin to combine. Wearables represent the first step toward this technological advancement.

Unsurprisingly then, the wearables market is thriving.

At GlobalWebIndex, our latest wave of data represents five complete years of tracking consumer ownership of wearables, which we define as smartwatches and smart wristbands. This offers us the perfect opportunity to explore how far the industry has come and to examine where it may go next.

When this is broken down by region, we can see that Asia Pacific is the most concentrated region for wearables, with 22% of internet users owning such a device.

In fact, our most recent research has found that the top three countries for wearable ownership are all found in Asia, with China leading the pack at 28%, followed by Singapore and Hong Kong – both at 25%.

Asia Pacific has been notably ahead of the curve for wearable ownership since 2014.

Of equal importance, however, is that North American wearable ownership has seen a 122% growth – with 20% of internet users in North America now owning a wearable.

Interestingly, despite North America being second to China in terms of unit sales, it remains the world’s most valuable market – reaching US$2.0 billion in Q2 2019.

What’s also particularly intriguing is the accelerating growth of the market in Europe since 2016. This transatlantic growth should come as little surprise after considering that the Apple watch was first released in April 2015.

Over the last couple of years, wearable ownership has continued to grow across all regions. And as we enter 2020, we want to shed some light on who these consumers are.

Our recent data helps us paint a picture of wearable owners today.

They’re slightly more likely to be male (54%) and almost a third are in the 25 to 34 age group – making this the biggest age range of wearable owners overall.

In terms of interests and behaviors, wearable owners are very outgoing and show signs of being interested in new and exciting trends.

For example, they’re around 1.3 times more likely to be interested in esports, adventure/extreme sports, or urban/modern art than the average user.

Additionally, they’re considerably more likely than average to say they take risks and that others view them as adventurous.

Moreover, it’s a common misconception that wearable tech is predominantly reserved for high income earners. In fact, like we saw with the smartphone – this is becoming less and less true.

As wearables become cheaper and their capabilities improve, more consumers of varying incomes are buying and using the devices.

Fundamentally, wearables have become more democratized, and in turn, a wider pool of consumers are benefiting from the various features these devices offer.

From status to essential

It’s clear from our data that this process is not solely cost driven.

Our research suggests that as the wearables market moves beyond the early adoption phase, consumers are beginning to recognize the potential these devices can have to help make their everyday life more efficient.

Essentially, what we’re observing is the end of the wearable as a representation of status.

We observed this by tracking three attitudes over 5 years and comparing what percentage of wearable owners and non-wearable owners agree with the following: (1) I like to keep up with the latest fashions; (2) having the latest technological products is very important to me; and (3) I tend to buy the premium version of a product.

In 2019, wearable owners still agree with these statements more than non-wearable owners; however this figure has declined significantly over the past 5 years.

This all points to one explanation: wearables are no longer used as a representation of status. Rather, they now offer a genuine benefit, and that’s a big part of what’s increasing demand.

This trend did not occur as the result of a so-called wearable revolution. Once the hype surrounding the potential of wearables faded, it became clear that as long as these devices tried to encroach on the territory of smartphones, growth in adoption rates would be hard to come by.

After all, why would someone pay for a device which offers little on top of the smartphone’s lengthy feature list?

But in the health and wellbeing industry, wearables seem to have found their niche – helping to explain this growth.

The future of wearables

With Google’s recent acquisition of Fitbit, the relationship between the wearable and healthcare industries is gaining significant momentum as the two converge.

And through our custom research, we were able to explore this trend and draw insight on how wearables’ association with health and wellbeing is driving the shift from status symbol to a genuinely useful device for more people.

Our custom research identified exciting growth potential in the U.S. and UK.

Of those who already own a healthcare wearable, the top use case is a step counter (66%), followed closely behind by a calorie burner (53%).

However, a considerable number of wearable owners are also using their devices for more sophisticated health functions that move beyond merely fitness tracking.

For instance, 34% use their device to measure their heart rate and 20% use it to monitor their blood pressure.

Such uses have significant potential to keep users not only fit and healthy, but also safe, especially if they have a medical condition which requires constant monitoring. This could make patient care much more efficient on a wider level.

Reassuringly, our data found 87% of healthcare wearable owners or those considering buying a wearable would be comfortable sharing their wearable data with their doctor.

Ultimately, healthcare wearable users seek comfort in knowing their bodies are functioning well, with 51% saying “it helps me feel more in control of my health”. Notably, this is slightly above “it helps me manage my fitness and body weight” at 48%.

When we asked all respondents about which additional health features would be most useful to monitor and manage in future, stress levels rose to the top (38%), highlighting that wearables could have a key place in managing mental health as well.

All of this symbolizes how wearables are moving beyond simple methods of measuring physical fitness and now have the capabilities to measure more biological and less obvious measures of our personal wellbeing.

Evidently, the previously mentioned Fourth Industrial Revolution is already beginning to take shape. We’re becoming increasingly aware of ways to monitor our own health, and if that entails combining physical and biological systems with digital technology, then that is certainly an industry where wearables can excel.

Throughout 2020, our data will allow us to monitor wearables’ growth among different audiences and demographics.

It’s clear the wearable market is undergoing serious growth and change. Once a sign of status, they now offer unique and valuable services to a growing consumer base, and potentially to the healthcare industry more broadly.