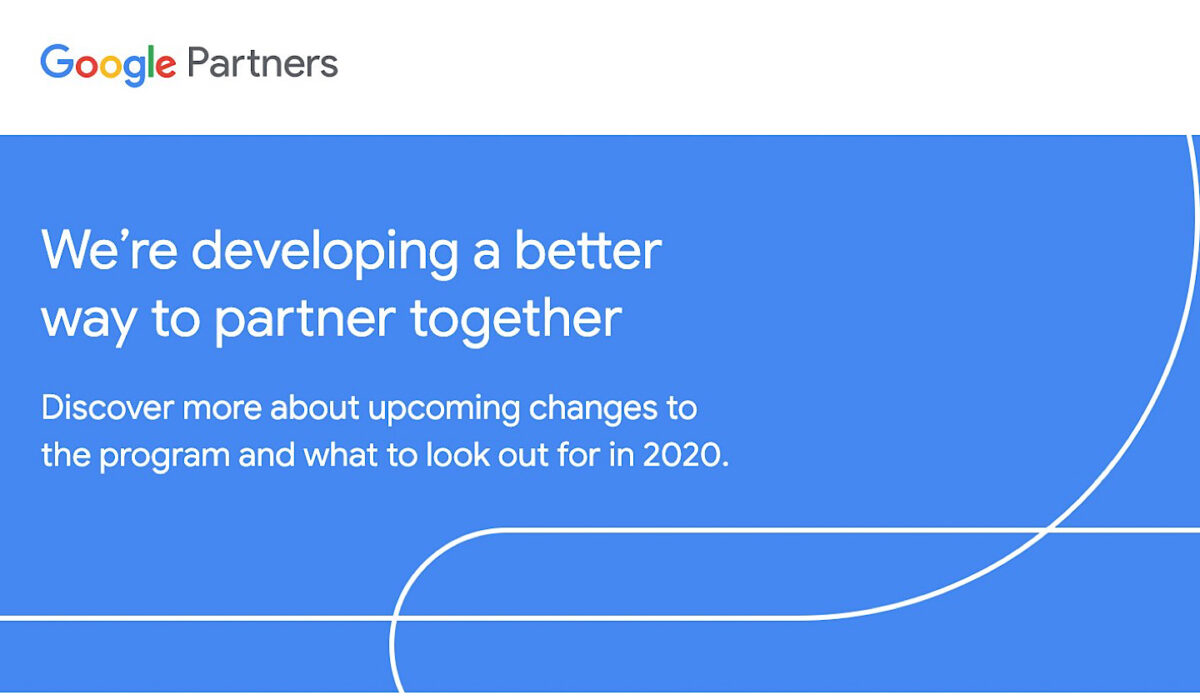 For this week’s edition of the Search Engine Journal Show, we have a special episode.

It’s me Greg Finn, a co-host over at Marketing O’Clock on the SEJNetwork, taking a crack at the first-ever pod panel here on the Search Engine Journal Show.

Together with Andrea Cruz, Digital Marketing Manager at KoMarketing, and Sam Ruchlewicz, Vice President, Digital Strategy & Data Analytics at Warschawski, we’re going to talk about what the Google Partners changes mean for agencies and clients. Why Are We Here?

The new Google Partners changes were first announced on February 12 and updated again on February 14 with little to no clarity.

There are three main differences than in the past:

Previously, a company needed one user certified in Google Ads who was an admin or standard access.

Now, a company needs to have at least 50% of its eligible users to earn updated certifications from Skillshop.

Previously, companies simply needed to meet the performance requirement by delivering solid overall ad revenue and growth while maintaining a growing customer base.

Additionally, you had to have 12 months of spend activity.

That’s no longer the case.

Now in order to obtain your Google Partners badge, you are required to adopt 70% of Google recommendations in your accounts.

This is the overall recommendation optimization score and previously you could dismiss the changes and get up to 100%.

That is no more.

“We evaluate the optimization score without dismissed recommendations for the company performance requirement.”

Before we proceed, is your agency a Google Partner?

Andrea Cruz (AC): Yes, KoMarketing has been a premier partner for a while… We have always been in a relationship with Google.

Yes, they provide valuable advice but it’s always a struggle in between what Google wants us to do, what we recommend doing, and what the action the clients are actually capable of doing.

Sam Ruchlewicz (SC): We are also a Google Partner agency. We have been for many years. I would say it’s a very similar experience but Andrea.

Sometimes they want us to change spends in ways that are definitely not beneficial for the client. It’s kind of a mixed bag.

But like I think you said it perfectly… we’re always in the middle of an exchange between what Google wants us to do, what’s best for the client…

Do you think that that having the Google Partner badge has helped your business?

AC: I think clients feel more trusting when they see that, “Hey, this is a business that has that relationship with Google.”

Or when a client can figure something out, they can go to us, their premiere partner specialist, and see if we can help them. In those cases, I think it’s useful.

SR: I think for a certain type of client, that’s definitely the case where they maybe haven’t done online advertising before or this is new for them.

It’s a nice thing and they look at it and they say, “Oh, that’s really interesting.”

It’s a mixed bag, I would say. And I’ve had that same experience where I was flabbergasted that some work could come from a specific agency and at that status so I think it seems like it’s across the board.

Is there anything that you really like about the Partners program?

SR: I think I do appreciate the access that we get to some of the Google account managers or the partner managers, whatever they’re called these days.

I think that’s been helpful in some instances to escalate and resolve client issues and not having to go through the traditional support channels that are suboptimal.

I would still think that’s too low, to be honest. I know plenty of freelancers that run triple that and they’re definitely not an agency nor part of the partner program.

AC: I kind of agree with Sam. I do think that it’s nice that they are moving it a little bit all because if you have two or three accounts, even if they are small, they would get to $20,000 early.

I don’t think that’s a negative but of course, I’m in a larger agency so maybe that’s why I think it’s okay.

On changes to Company Performance requirements…

Greg Finn (GF): Let’s talk about something that I haven’t really seen anybody talking about specifically – the change that you no longer have to have your account active for 12 months.

So I think that somebody who doesn’t have an account active for the past 12 months, it also makes sense for them to be a partner because the things that we were doing last year are very different from the things we’re trying this year.

SR: I think it’s awful… I’ve personally dealt with enough clients that have gotten really bad treatment from other agencies, partners or freelancers.

Like you said, you need a track record if you’re going to be a partner… As Google, you want to instill trust in it.

You can’t have two-bit hacks running around and putting Google partner badges on their website and the second something bad happens, you just open up a new shop and all of a sudden, they’re a Google Partner agency after a month. That’s craziness.

The whole point should be this instills trust and confidence that these are trained professionals we’re going to work and do what’s best for you, not random humans that went into business three weeks ago.

What are your thoughts on the changes to the Certification portion where 50% of eligible users needing Skillshop certifications?

SR: I’m fine with it. I like the idea of making sure everyone that is working on your account is good.

But when the answers [to the Skillshop tests] are posted online and there’s no accountability, it doesn’t mean much.

It just means that half the members of your team we’re smart enough to sit and Google answers to the Google Skillshop certification for a half an hour on a random Tuesday, it’s not a meaningful point of difference.

And if you’re a small agency with a $20k spend, you might only be a two-person shop. Again it doesn’t instill confidence, it’s just one of you had the certification.

AC:  I’ve always had this perspective that when you are new to Google Ads, I think it’s a good thing that you learn all the terms and how Google wants you to think because the experience and the practice in the agency will show you what Google wants you to do versus what you should actually be doing.

I think new people in PPC should do the certifications…

But my issue with it is I think Google tells me there’s this amount insane amount of people that should get certified which is incorrect.

It’s telling me that I have to get my clients certified which is not going to happen.

GF: I actually think they’re probably going to work that out. That seems like a bit of a mistake. I would hope that you don’t have to get your clients certified for your partner status.

So my guess is that for the most part, that’ll work its way out hopefully and that’d just be down to the 50% you at your partner company.

Overall, it doesn’t seem like there’s too much there as long as the clients are out of the equation for you.

SR:  I actually agree with the fundamental idea of doing it. I think it’s good to make sure people are trained.

I don’t necessarily agree that the way Google’s doing it’s the right way to do it, but that’s one argument for another day.

What are your overall thoughts on Google’s Recommendations?

AC: Most of them are awful. I always have this recommendation in my account which is to:

So that’s my issue with the recommendations. Those are the ones I mostly see in my accounts.

But I do know that, for example, if you’re a smaller agency or a single person just doing Google Ads on your own, it will be helpful to see recommendations such as keyword variations, etc.

My issue is with the other ones that are just to fill Google with more money than they already have.

SR: Using an analogy, I think the recommendations are kind of like a cargo ship or a cruise liner. They get you in the general right direction.

But that’s not where the money’s made. Where our clients really see differences in performances, you have to run a speedboat, so to speak, and make quick changes…

We have clients that are in very specialized and regulated industries and Google’s serving us keyword options that are not what the client does, not aligned with the business, and if we ever implemented them, they’d legally come down on us…

Especially for some of our B2B clients, some of those recommendations are just bad.

GF: I want to go in another direction here. Andrea, you had enlightened me about a month ago to the fact that you could dismiss the Recommendations and still get a 100% recommendation score. That got a lot of buzz around the Twittersphere.

According to the new rules, you can’t count dismissed recommendations toward company performance goals. What are your thoughts?

AC: …Google itself told me that you can dismiss the recommendations and your percentage will increase. They said that’s how it worked.

In fact, they also let me know that when you do this, you are actually telling the algorithm that the recommendation doesn’t apply to your account.

So I thought that was very interesting that they are now saying that if you dismiss them, it won’t work.

GF: Now, you can dismiss the recommendations but it will not count towards that number that you had to hit.

When [the changes] first came out, that number wasn’t clear and they clarified that to 70% of the recommendations out there.

SM: I think that’s bad because 70% of the recommendations aren’t good.

In that case, I’m being put in this weird situation as an agency where if I want to keep my Partner badge, I have to do what Google says even if I know or have a really good reason to believe or have been directed by a client to not do that.

So now my interests are opposed to my clients’ interests potentially if I care about the Partner badge. But it’s just no, I fundamentally disagree with that.

Apparently, it’s relatively common among the kinds of agencies that you probably wouldn’t refer to your clients…

This podcast is brought to you by Ahrefs and Opteo.

Visit our podcast archive to listen to other Search Engine Journal Show podcasts!