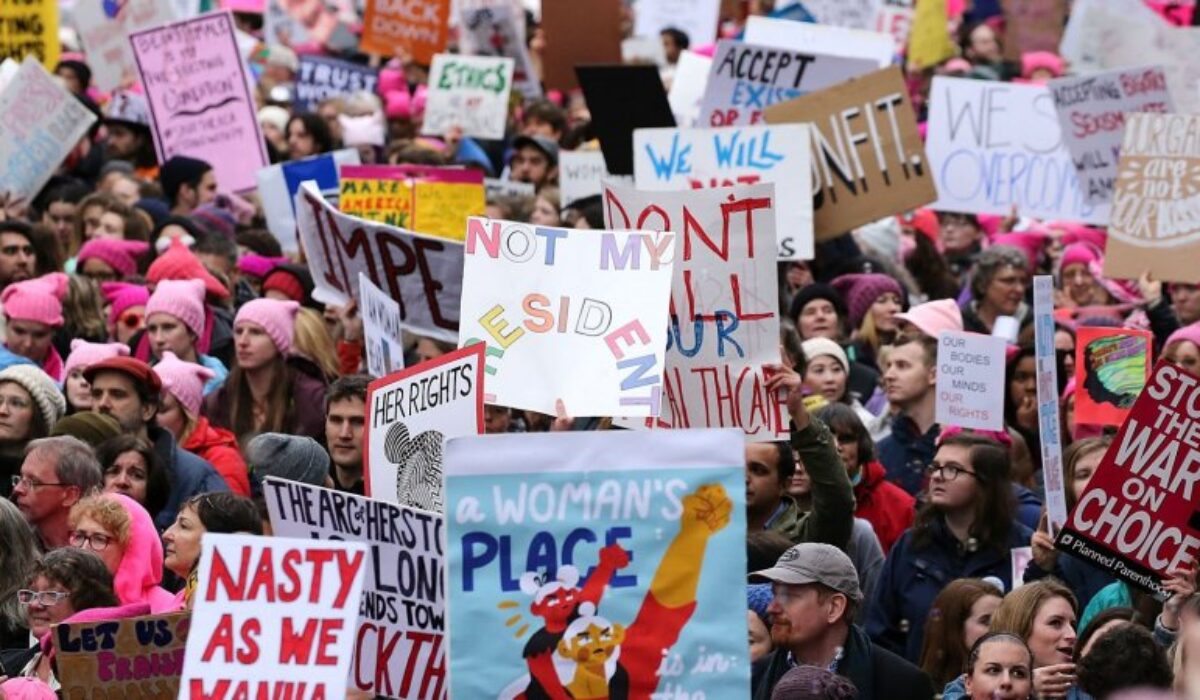 Groping, sexist comments, sexual harassment: The allegations are not new. If the name Anita Hill doesn’t ring a bell, I’ll wait while you Google.

But 2017 was different. Maybe it’s the fact that Donald Trump was caught on tape bragging about assaulting women, and went on to become President anyways. Maybe it was the Women’s March. Maybe it was because brave women from Hill to Ellen Pao had paved the way.

It was as if, en masse, women decided that the whole strategy of “play nice with the boys and you’ll be recognized for your hard work” needed to be called out for the lie that is. Because too many of the boys are not playing nice, at least not with girls. Because too often, “playing nice” comes at the price of your physical safety and your personal integrity. Because bastions of male privilege have no intention of becoming anything else. And because in the face of sexual predators and abusers of power, leaning in is a mean joke.

Women spoke up in such numbers that men couldn’t easily ignore them, although supporters of Roy Moore are doing an impressive job trying. Unlike Moore, many harassers have admitted that they are guilty as charged. (Consider the words of Mario Batali: “Much of the behavior described does, in fact, match up with ways I have acted.”) Expect to see a lot more: In a recent survey from First Round Capital, 78 percent of female founders said they’d experienced sexual harassment, or knew someone who had.

Suddenly, individual men are starting to be held accountable. No one is in jail, although Harvey Weinstein and director James Toback are both the subject of criminal investigations. Still, Matt Lauer is out. House of Cards will continue without Kevin Spacey. Al Franken resigned his Senate seat. In the startup world, Dave McClure left 500 Startups. Justin Caldbeck resigned from the management of Binary Capital. Even Travis Kalanick, thanks to the toxic culture he fostered at Uber, was ousted.

We’ve known that sexism is bad for business for a very long time. That’s at least partly because diversity and inclusion is very, very good for business. We need all the talent we can get, becuase diverse teams tend to make better decisions. Women-led startups make more efficient use of capital. Startups that include women on their leadership teams have 63 percent better valuation growth than those with all-male leadership teams.

We know all this. Yet so many white male partnerships pretend that they’re the shining exception that proves the rule. This year the wider world discovered to just what lengths those white male cliques are willing to go to make sure they stay white and male. At Uber, Susan Fowler’s bosses didn’t just proposition her and threaten to fire her for reporting incidents to HR. They refused to buy leather jackets for the six women in her group, even though they bought them for the more than 100 men. It’s hard to imagine how they could have been more small-minded. And tech bros have been known to claim, with a straight face, that Silicon Valley is a meritocracy.

The path forward is just as messy as the one we’ve been traveling. Many influential women have long insisted that men need to be part of this conversation. Men hold the power, the logic goes, so if the culture is going to change, men have to be part of that change. “If we’re going to do anything in the world, we’re going to do something about men,” said Cherie Blair, founder of the Cherie Blair Foundation for Women and wife of former British Prime Minister Tony Blair, during a recent panel discussion.

But, changing the men–somehow–doesn’t mean waiting for them. The number of women running for Congressional or statewide offices is already more than double what it was in 2016. In the 2016 elections, 183 women ran for the U.S. House or Senate. In 2018, we’re looking at 410 women — so far.

In the startup world, women such as Trish Costello, of Portfolia, and Vicki Saunders, of SheEO, among many others, are working to build new funding systems that enable women-led startups to raise money from women investors. (Angel network Golden Seeds was the first to invest solely in women, in 2005). In a recent blog post, angel investor Joanne Wilson writes that when female investors are looking to back an exceptional female entrepreneur, and are looking for co-investors, they now show the deal to other women first. They’re playing nice–but sometimes that’s a lot easier without the boys.