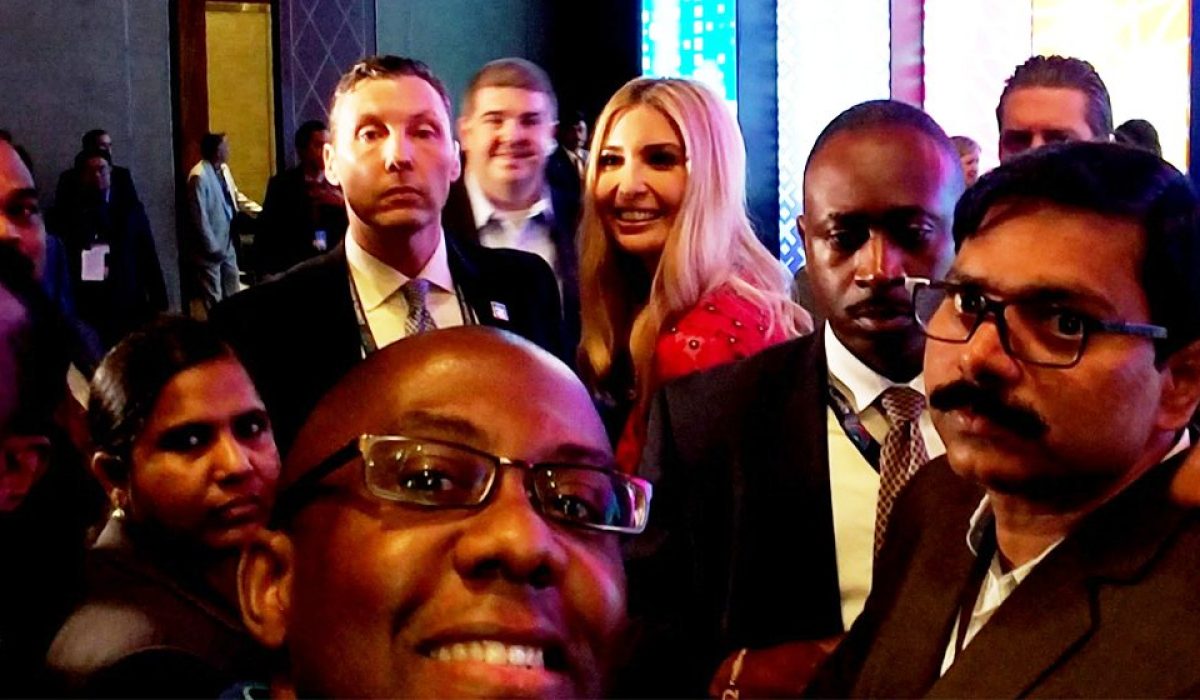 Just about everyone wanted to get close to this global celebrity and now Special Advisor to President Donald Trump, her father.

I was at her last public appearance at the conference, a panel discussion, and “plotted” how I could get my own selfie with Ivanka. Here’s how I did it and how you can learn the power of networking for your business and personal life.

It’s worth noting that, using these power networking techniques, I’ve been able to have access to several high profile “celebrities”, including former President Barack Obama, then-Senator Hillary Clinton and others.

So Ivanka was surrounded by security and there was a crush of other people who wanted to meet her and get their selfies too. I had to position myself in the right way and strategically plan my selfie.

When networking with a celebrity or a regular person, understand the situation you’re in. Is it outside? Is it inside? Is there security around? Are there stanchions (crowd control barriers). Read the entire situation to make the best of the moment.

Networking Is Not About You, it’s about Them

I could have just yelled out, “Ivanka, may I have a selfie with you?” But I didn’t.

Instead, I made a personal connection between her and me and said, “I flew 15 hours from New York City… .”

Ivanka’s a New York girl. That got her attention and she came forward to take a selfie with me.

Networking is not going to work every single time. However, to increase your chances of success know “what time it is”. I knew Ivanka was coming to the end of her speech — you could hear it in her tone and cadence and you could feel the tension of her security team.

When networking, be cognizant of the timing of the OTHER person. Are they in a rush? Do they have time to network? What are they doing next? Is this the best time to connect with them? Is there a better time?

Understand Who You Are Networking With

Ivanka Trump is a very powerful lady and a mega celebrity. I knew I had to approach her respectfully but confidently. When doing your own networking, keep this in mind. How you approach the head of a huge chamber of commerce might be different than how you approach a local author.

Everyone has a different way they like to be approached. While you probably won’t know this person in depth, you should be able to understand them just enough to get a sense of how to approach them.

Get to the Point

The point of networking is NOT to find someone to chat with all day because you’re lonely. Networking is about being quick and to the point. It’s about using the initial contact for future discussions or follow up.

Of course in my “selfie” with Ivanka, it was not for follow up. But you get my point.

In networking, be brief and don’t hog the person’s time.

Be Clear on Your Objective

The best networking has a very clear objective. I often get emails from people who want to “find out what I do”. Well just about everything I do is online — very public. If you really want to meet me to get help with your business, say that. Want to meet to sell me something? Say that.

What’s YOUR objective when you network? Of course, that object will change depending with whom you’re networking.

I remember many years ago when I got a few seconds with then Chairman of the Joint Chiefs of Staff Colin Powell. He had just given testimony at the United Nations about Iraq. It was raining. I had made friends with his security detail and asked them if I could chat with him. They said to keep my distance and not move my hands but I could respectfully shout to him and ask him.

Being a JERK rarely gets you ANYWHERE, but being pleasant and nice will always get you ahead.

Respect Those Around You

If you want to network with someone — especially a celebrity — most likely, there are many people around you who want to network as well. Be respectful of their time and their desires too.

If you only have 30 minutes of networking after the person’s speech, don’t take 28 of those minutes.

Remember, there are also a lot more people with whom you could and should be networking.