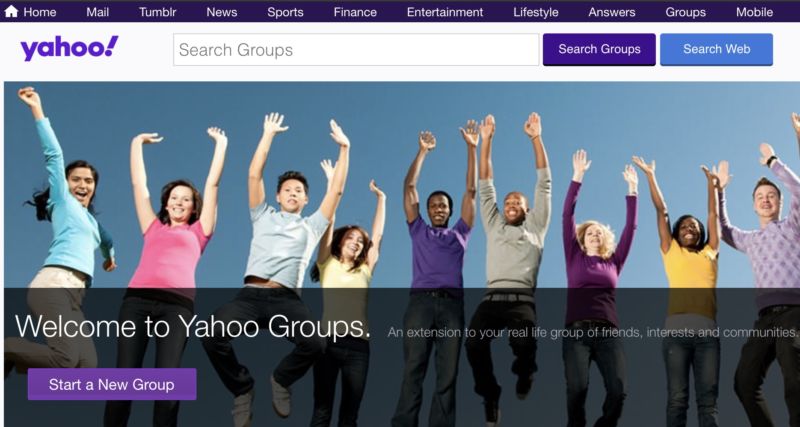 Yahoo Groups is shutting down after more than 18 years, and the Verizon-owned company is deleting all content from the site in mid-December.

“Yahoo has made the decision to no longer allow users to upload content to the Yahoo Groups site,” the company said in a notice to users. “Beginning October 28, you won’t be able to upload any more content to the site, and as of December 14 all previously posted content on the site will be permanently removed. You’ll have until that date to save anything you’ve uploaded.”

The notice links to one Yahoo webpage that provides instructions for downloading photos and files from groups that you belong to before the cutoff date, but the process sounds laborious, as it requires clicking on each photo or file you want to download. The shutdown notice also links to a page that provides instructions for requesting a download of all your Yahoo data. This page notes that “It can take up to 30 days for the request to finish processing and the download to become available.”

Although the Yahoo Groups site will continue to exist after December 14, “all public groups will be made private or restricted,” Yahoo said. Users will continue to “be able to communicate with your groups via email and search for private groups on the site,” and admins will retain “limited access to group settings and administration tools,” but that’s it.

All of the following features are going away, Yahoo said:

The Yahoo Groups site already feels neglected. Visiting the homepage today, I saw a list of groups that hadn’t been active in years. The home page also links to the Yahoo Groups official blog, which hasn’t been updated since October 2014. When you click on a group, you’ll see a notice at the top of the page that warns about the impending shutdown.

Yahoo launched Groups on January 30, 2001, saying in a press release that the site would help users “build relationships, stay in touch, share ideas, and discuss interests through the convenience of popular e-mail and Web-based tools.”

In 2010, Yahoo said there were 115 million Yahoo Groups users and 10 million groups, eWeek reported at the time. Yahoo also boasted then that it had contracts with about 100 carriers and handset makers around the world to preinstall Yahoo apps on mobile devices.

Yahoo was feeling pressure from Facebook already but was trying to convince users that Yahoo Groups offered unique advantages. “On Facebook, if you have hundreds of friends, you have to be careful about posting something that might be offensive or just not relevant to somebody,” Yahoo director of user experience Greg Rosenberg told eWeek in the 2010 article. “With Yahoo Groups, you can start up a neighborhood page with a smaller group, for example, that would be of interest only to those neighbors living in the neighborhood.”

Obviously, Yahoo Groups lost prominence as social networks soared, and the Yahoo business in general declined throughout the 2010s. Verizon bought Yahoo’s operating business for $4.48 billion in June 2017, forming a new subsidiary called “Oath” that included both Yahoo and AOL.

Oath (now called “Verizon Media”) failed to compete effectively against Google and Facebook in the advertising market, and Verizon has responded by repeatedly cutting the division’s budget and staff.