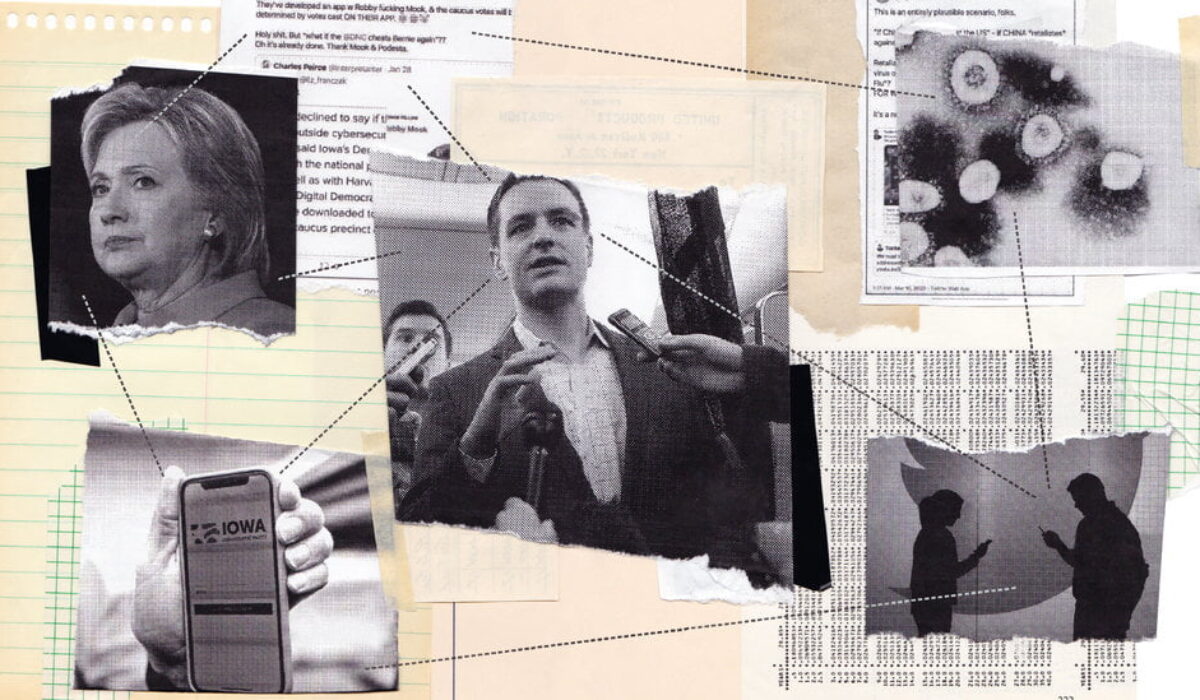 The night of the Iowa caucuses last February, Robby Mook, Hillary Clinton’s 2016 campaign manager, logged into Twitter to find the hashtag #RobbyMookCaucusApp trending across the country. Pundits on both sides of the aisle accused him of developing a mobile app to rig the Democratic primary against Senator Bernie Sanders.

Soon his phone was buzzing with calls from reporters demanding to know what role he had played in creating the app, a flawed vote-reporting system that delayed caucus results for days.

But he had never even heard of the app, which was developed by a company called Shadow Inc. This mattered little to the thousands of Twitter users attacking him online. Four months later, Mr. Mook sighed, “There are still people out there who believe I developed that app.”

Mr. Mook was the target of an American-made social media conspiracy theory that was picked up by Americans and quickly amplified by accounts with Russian links. What happened to him in February — though just a sliver of the enormous amounts of misinformation pouring onto social media platforms — offers a manual to understand how false information about the coronavirus and the election is now spreading.

Russians have concluded it is far easier to identify divisive content from real Americans and stoke and amplify it instead of creating tales of their own.

“Russia’s trolls learned it is far more effective to find the sore spots and amplify content by native English speakers than it is to spin out their own wackadoodle conspiracy theories,” said Cindy Otis, a former C.I.A. analyst who specializes in disinformation.

The conspiracy targeting Mr. Mook started a week before the Iowa caucus, when Chelsea Goodell, a web designer in Arizona, quoted a Twitter post that included a screenshot of an article from the technology news site CNET describing Democrats’ plans to use an app to tabulate votes in the caucus.

The article noted that Iowa officials were working with Harvard University’s Defending Digital Democracy program — a program Mr. Mook helped found — to protect the caucus from digital threats. Ms. Goodell claimed it was a Democratic ploy to steal the primary from Mr. Sanders.

There was no basis for her claims. The Digital Democracy Project had run threat simulations for Iowa election officials in both parties. But neither Harvard’s staff nor Mr. Mook had even seen the Shadow app before the caucuses that February.

The conspiracy theory might have flamed out had it not been picked up by Ann Louise La Clair, a self-described Los Angeles filmmaker with a Russian Twitter following. Her tweets praising RT advertisements and protesting American airstrikes in Syria — a key Russian ally — had previously been picked up by RT, the Kremlin-owned news outlet.

She had also caught notice of @DanWals83975326, who also claimed to be a filmmaker. But his Twitter feed suggested otherwise.

He tweeted in broken English 72 times a day, on average, often in the middle of the night in the United States — just as business was getting underway in Russia. Of the 2,000 accounts he followed, many posted exclusively in Russian. He routinely shared content from RT, Sputnik, Tass and other Kremlin-owned outlets.

He often took aim at the “deep state” and American media and retweeted Americans like Ms. La Clair who criticized the “Democratic establishment.” In fact, Ms. La Clair was among the top 10 accounts @DanWals83975326 retweeted. He promoted Ms. La Clair’s theories to his 1,200 followers, which included a broader network of Russia-linked accounts that bore the words “Russia,” “Moscow” and “Kremlin” in their profiles, set their locations to Russia, and regularly promoted Russian state news.

The account he “liked” most frequently belonged to @Manul_na_skale, which posted from Russia, exclusively in Russian, and highlighted tweets like “Happy Border Guards Day” — a holiday celebrated by members of the F.S.B., the successor to the K.G.B.

None of the accounts in @DanWals83975326’s network had particularly large followings.

“They aren’t looking for their own accounts to go viral anymore, because it draws attention to themselves,” said Ms. Otis, the former C.I.A. analyst. “The bulk of their approach is to slip into existing narratives.”

Within 10 minutes of Ms. La Clair quoting Ms. Goodell’s Mook-Iowa theory, @DanWals83975326 shared it. When the app imploded the night of the caucus, RT picked up the theory, writing: “There are rumors that Clinton’s former 2016 campaign manager, Robby Mook, was indirectly involved with the Shadow app.”

By the time Mr. Mook could correct the record on Twitter that evening, the false claim had been shared more than 20,000 times. The #RobbyMookCaucusApp hashtag had climbed to the top of Twitter. Soon, President Trump, his campaign advisers and his sons were echoing the claims.

“Mark my words,” Eric Trump, the president’s son, posted, “they are rigging this thing.”

“Russia just pushes populists against the establishment,” Mr. Watts said. “It doesn’t even matter what their political leanings are.”

It was the same technique the Kremlin used in 2016 when Russian trolls posed as Texas secessionists on one Facebook page and pro-Muslim rights activists on another and coordinated a real-world standoff between the two groups in Houston. The difference now is Americans are doing all of the legwork for them.

“I don’t know what to think anymore,” Ms. La Clair said when asked in an interview about Russian amplification of her tweets.

She said she was a Sanders supporter and still upset about 2016, when emails hacked and leaked by Russia appeared to show the Democratic National Committee undermining his campaign. To her, Ms. Goodell’s theory made perfect sense — though Ms. La Clair later blocked Ms. Goodell and deleted her post quoting the Mook theory after other Sanders supporters suggested that Ms. Goodell’s tweets were duplicitous.

“I don’t want to be used as somebody’s pawn,” Ms. La Clair said. “But to find out whether every tweet I share is disingenuous, I would have to go all the way back and find out who the instigator is. I don’t even know how to do that.”

As for Ms. Goodell, she dismissed questions about her Iowa caucus posts and pushed her latest theories: that Covid-19 is a Chinese bioweapon and that a drug called ivermectin that is used on animals is the panacea.

“That is vastly more critical to us right now than a Russian political campaign,” Ms. Goodell said. As her and others’ ivermectin theory gained traction online, the Food and Drug Administration warned Americans that the drug could cause “serious harm” in humans.

Ms. La Clair also tweeted that the coronavirus was a bioweapon, only in her version it was developed by the United States or Israel.

She argued on Twitter that Dr. Anthony Fauci, a crucial figure in the Trump administration’s pandemic response, and the billionaire Bill Gates are part of a plot to profit from an eventual Covid-19 vaccine. Once again, her theories were promoted by @DanWals83975326.

@DanWals83975326 also promoted Russian accounts that claimed the virus was created at an American military base. Disinformation analysts suspect his account is part of a broader Russian campaign. A leaked European Union report found, in the two months leading to mid-March, 80 instances in which Russia fabricated or exaggerated theories that Covid is a bioweapon. In February, American intelligence officials warned that Russian accounts were once again meddling to re-elect President Trump in 2020, and boosting Senator Sanders as part of that effort.

@DanWals83975326 continues to play his part. He amplifies Mr. Sanders and Representative Tulsi Gabbard, the Democrat from Hawaii who is a favorite of the Russian press, while slamming Vice President Joseph R. Biden Jr. and the D.N.C. He applauded Joe Rogan, the podcaster and onetime Sanders supporter, when he announced that he would vote for Mr. Trump over Mr. Biden.

“Joe Rogan is with people & not of the dumbest flock,” @DanWals83975326 tweeted. (The account turned on Mr. Rogan in May after the podcaster dedicated an entire show to the question: “Why is Russia so crazy?” More recently, he has pushed Jimmy Dore, a comedian who was a staunch critic of the special counsel’s investigation into Russian collusion and is an ardent critic of Mr. Biden’s.)

In late May, after this reporter sent the account holder a list of questions concerning his identity, @DanWals83975326 vanished, deleting his Twitter history. He recently resurfaced as @DanRadov.

But the game is still the same. He still amplifies Ms. La Clair’s posts, blames the Pentagon’s “bioWMDs” for the pandemic and — with the nation seized by protests — his latest tweets seem to appreciate how little foreign interference is required to take the country down.

“U.S. has long been in the position when one spark can burn the whole country down and all of the United West for that matter,” @DanRadov posted. “Buckle your seatbelts people. We are up for rough ride.”