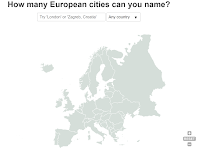 Both of the games are played the same way. Simply open the game map and start typing the names of cities. When you enter a city it will appear on the map. The object is to name as many cities as you can without stopping. When you’re done you’ll see a list of the cities that you named and the populations of the five biggest cities and the five smallest cities that you named. 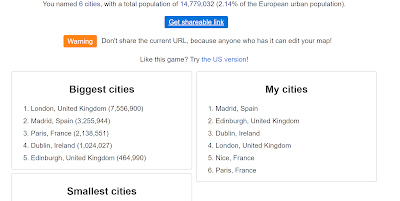 Applications for Education
What I like about these games is that there isn’t a points system. It’s simply a challenge for students to continue to recall the names of cities that they have learned about or at least heard about. For students who have heard of city but aren’t sure where it is, the game shows them the location. And as a bonus, students don’t need to register to play the games.