Trying to choose between Bluehost vs WP Engine? These two are fairly different hosts, especially when it comes to price.

Bluehost is an affordable shared WordPress host, while WP Engine is a premium managed WordPress host with all the bells and whistles — and a price tag to match! But if you want to host a WordPress site, these are two of the biggest names you’ll come across.

In this host, I’m going to help you decide by comparing Bluehost vs WP Engine.

I’m not too concerned with comparing the feature lists, because that’s something you can just figure out by reading each host’s website.

Instead, I’m going to take a deep look at how each host performs, with an identical test site setup on each. Then, after running a bunch of tests, I’ll help you analyze the data and choose the best host for your needs and budget.

In this post, I’m specifically comparing these two plans:

However, just because WP Engine loads faster at 7x the price, that doesn’t automatically mean it’s the right host for you.

I think a better way to frame this Bluehost vs WP Engine comparison is:

Let’s start by comparing the performance of each host.

To measure each site’s performance, I set up a test site at each host using the popular Avada theme. From there, I imported a full Avada demo site and installed some other popular plugins – like Yoast SEO.

The goal here is to create a site that mimics a WordPress site in the real world. You can see a full screenshot of the demo site here so that you know what all is going on.

I didn’t make any performance tweaks on the site beyond what the host already implemented:

First, I ran those sites through WebPageTest with the following configuration:

Then, I also ran each host through Load Impact to see how it performs under scale:

And I’ll do both of those tests on four separate days to get some more data points. So long story short, this data is based on 36 different speed tests and 4 different Load Impact tests for each host.

Here’s the raw data first, and then I’ll share some analysis right after.

Again, this test data is the median value from 9 separate tests. If you click on the links in the tables below, you can see all of the separate tests, and I’ve also calculated the mean average below the table if you’d rather see that number.

Analyzing the WebPageTest Data for Bluehost and WP Engine

Let’s start with the obvious conclusion – WP Engine is just plain faster than Bluehost, which is totally expected given the price differences between these two plans.

On every single day, WP Engine loaded the exact same site in ~half the time it took Bluehost.

The difference is even bigger when you look at the First Byte data. Time to First Byte measures how long it takes for just the first byte to be delivered from the server. Basically, it shows you how responsive the server is itself.

In all the tests, it took WP Engine ~10% of the time it took Bluehost to respond, which is a pretty big difference. Basically, it takes Bluehost ~1.4 seconds just to start delivering your site, whereas WP Engine starts pretty much right away.

To verify these results and make sure it wasn’t just a difference in location, I ran a few tests with Bytecheck, as well (a dedicated tool for measuring time to first byte). My WebPageTest test location was pretty equidistant between Bluehost and WP Engine, but I wanted to make sure I wasn’t being unfair.

You can see the exact same difference in Byte Check, though:

Because it takes Bluehost well over a second to deliver even just the first byte, you’re never going to make your site load as fast as what you get with WP Engine.

One thing that did surprise me, though, is the Load Impact data. If you’re not familiar with this test, it analyzes how a host can perform under scale by simulating 50 visitors browsing your site in the same 5-minute span. It starts with a single visitor and then gradually ramps up the number of visitors over 5 minutes. At the end, there are 50 visitors all browsing at the same time.

Essentially, it’s answering the question – “will this host load a site just as quickly for the 50th active visitor as it does for the 1st visitor?”

When I tested Bluehost with its own caching system turned off for our caching plugin comparison post, there was a noticeable spike in page load times around the 40 visitor mark. Here’s an example:

Essentially, this example is saying that Bluehost was able to load the site quickly for the first 40 visitors, but once it got past 40 active users, the page load times became erratic.

However, with Bluehost’s built-in caching enabled, this spike was absent and Bluehost managed to keep steady page load times for all 50 visitors.

Now, WP Engine is still definitely faster – in all three tests, WP Engine hovered around 500 ms load times for all 50 visitors, while Bluehost was up in the 1.5-2 s range.

However, this does show that, with Bluehost’s caching enabled, you can handle up to 50 concurrent visitors, even on a cheap Bluehost shared plan…it just won’t be as fast as WP Engine.

Is Bluehost Fast Enough? Let’s Look at the Data

Ok, so WP Engine is faster than Bluehost – that’s pretty clear from all the test data. But that brings up yet another interesting question – “is Bluehost fast enough?”

That is, for the average site, does the difference between Bluehost’s ~3 second load times and WP Engine’s ~1.5 seconds really matter?

Well, first off, let’s look at what the big names say – according to John Mueller, the Webmaster Trends Analyst at Google, “I often check http://webpagetest.org and aim for <2-3 secs”.

Given John’s position at Google, that’s definitely something to pay attention to.

However, according to Pingdom’s data (which they definitely have plenty of!), the average website loads in 3.21 seconds, which is pretty much smack dab around where our Bluehost test site landed.

But here’s the thing:

You can see the connection in the table below: 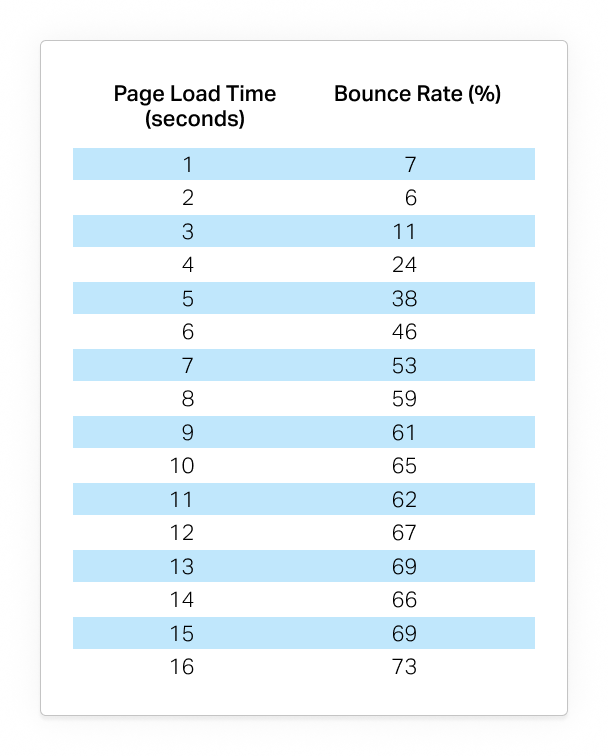 This jives with other page load time statistics:

Basically, the data seems to show that getting under that 2-second mark can make a noticeable impact on your site when it comes to bounce rates and engagement. And based on our test data, WP Engine gets you there, while Bluehost doesn’t.

So for that reason, investing in better quality hosting like WP Engine can have a positive impact on your site…if it’s within your budget.

At this point, I’ve pretty much summed up the key performance differences between WP Engine vs Bluehost. So let’s finish out this post with a brief summary of some of the other things you might want to consider.

First off, WP Engine is a managed WordPress host, which means you also get other helpful features like automatic backups, easy staging sites, and more. So you’re not just getting better performance, you’re also getting some convenient features, too.

All in all, there’s definitely a reason to consider using WP Engine over Bluehost if it fits your budget. Beyond loading your site more quickly – which has an effect on user experience and metrics like bounce rate – you’ll also get all those nice managed hosting features and the custom dashboard.

If you’d like a deeper look, check out our full WP Engine review.

Used/using either Bluehost or WPEngine? Thoughts?

Colin Newcomer is a freelance writer and long-time Internet marketer. He specializes in digital marketing and WordPress. He lives a life of danger, riding a scooter through the chaos of Hanoi.