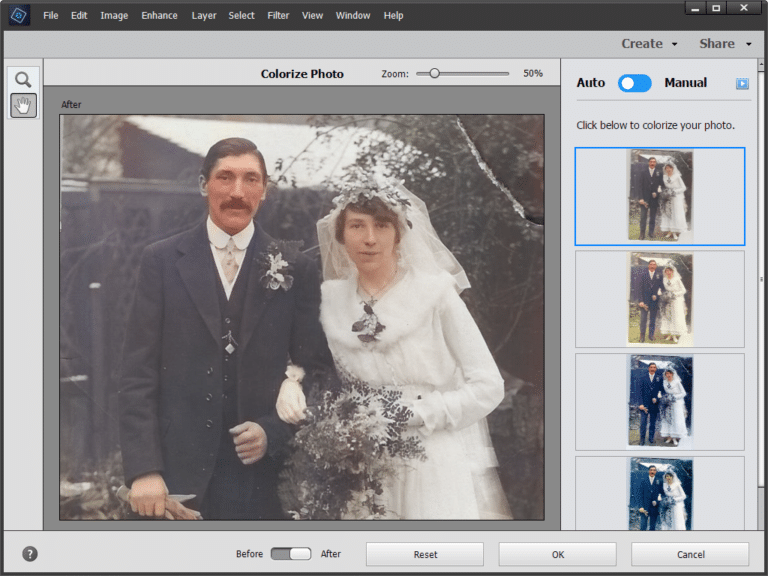 Adobe has released major new versions of its entry level image and video-editing suites with the joint release of Adobe Photoshop Elements 2020 and Adobe Premiere Elements 2020 for Windows and Mac.

Both new products add a smattering of new features to add to their already rich capabilities. Photoshop Elements includes the ability to automatically colorize photos and select subjects in a photo with a single click, while Premiere Elements adds a feature to reduce grain from noisy videos.

The Home Screen — a feature of both tools — debuted in the 2019 edition, and now provides new photo-based effects in the guise of Auto Creations, including Black & White, Pattern Brush, Painterly, and Depth of Field to accompany existing slideshow and collage suggestions.

Photoshop Elements users gain some striking new tools to breathe new life into old photos, with the ability to colorize any photo — whether black and white or faded. The colorize technology isn’t new or exclusive — users can access it via various web-based apps — but it’s strikingly effective.

A new one-click subject selection tool aims to simplify the selection of objects to help remove backgrounds or cut out objects quickly. There’s also an automatic tool for smoothing wrinkles and other ‘blemishes’ from skin in photos.

The app also brings the number of step-by-step guided edits it provides to 55 with two new tools — one to help remove unwanted objects from images, and the other to add patterns to the backgrounds of photos.

Premiere Elements opens with the promise of improved quality low-light videos thanks to its Reduce Noise effect, which users can simply drag and drop to minimize the effects of grain. The app adds three guided edits to its own roster to offer users 23 in total — the new edits facilitate the creation of dynamic time-lapse videos, animated skies and the conversion of videos from portrait to landscape (and vice versa) without losing any detail.

In addition to the new smart tagging feature, Premiere Elements now performs automatic facial matching to stack videos according to the people in them.

Finally, both apps have been fine-tuned with the claim of better performance over the 2019 releases. Windows users also gain the ability to import and edit HEIF (photo) and HEVC (video) files to match existing Mac capabilities.