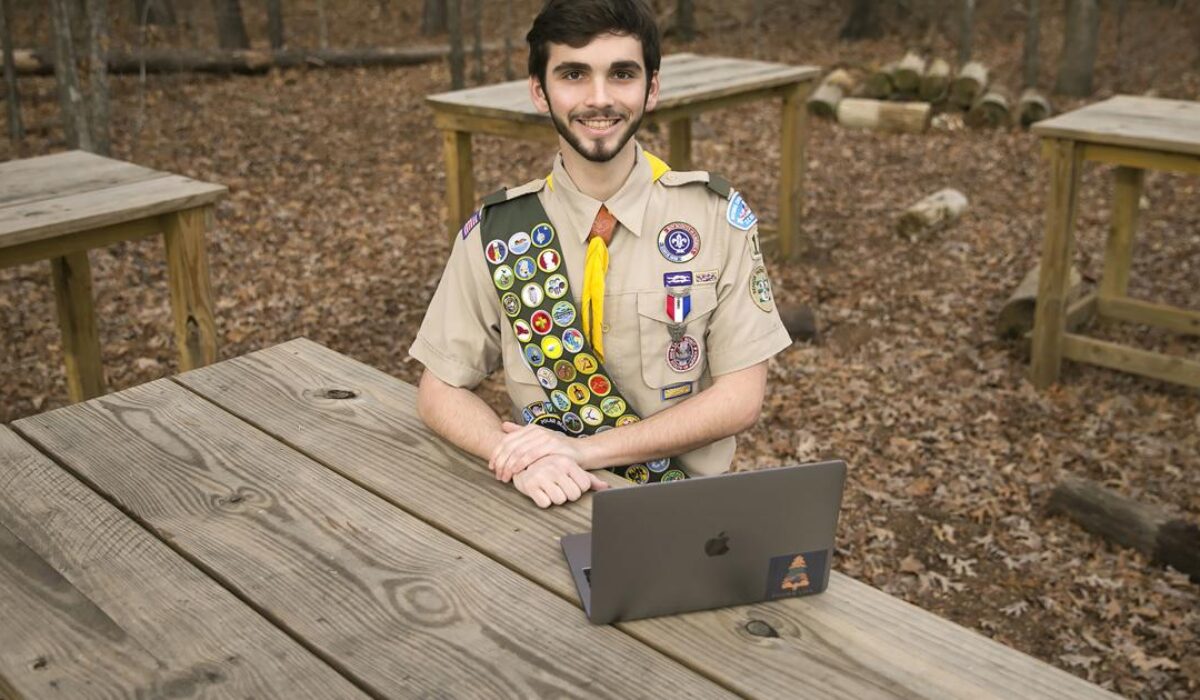 When Spotsylvania County’s Andrew Branham was 14 and wanted a more powerful computer, he didn’t save up his part-time paychecks to buy one.

He just built his own, reading up online and diving in to create one himself.

And when he got more and more interested in all things digital—especially marketing and targeted advertising—a 17-year-old Branham started an online site called Outdoor Energy to sell a range of outdoor-oriented products.

It didn’t take off, but he was a Courtland High School student at the time, and learned a lot about what works and what doesn’t by going through the effort.

It’s one of the reasons he didn’t labor long making the decision to create his latest company: Skybase Media. He describes the business he runs out of his home as a digital media agency that does marketing, web design, advertising and social media optimization.

Because the young businessman who dreams of becoming a successful entrepreneur was advised by a mentor to find a way “to differentiate himself,” he describes his business as being “Eagle Scout owned and operated.” It also happens to be founded, funded and owned by a teenager, from an idea that came from a high school business management class.

Though the concept is remains unproven, Branham said he wanted to publicize his efforts to show other young people they shouldn’t just sit back and wait for success to arrive.

Instead, he said, they need to work hard to prepare and then jump right in.

That’s what he did last fall after graduating from Courtland and deciding he would rather dive into business than spend a year or two in community college.

He has a day job, working at Summit Environmental Solutions, a pest control and insulation company in Stafford County where Branham works in marketing, search engine optimization and increasing online visibility. It’s work that applies directly to the business he started last fall.

“It’s taken awhile to get the word out about the business and connect with clients, but the work is starting to come in,” said Branham.

He’s designed a website for a Mexican restaurant chain in Pennsylvania and is working with a dog breeder and an entrepreneurial networker on their projects.

Faced with the challenge of launching a business, Branham did what he’s done in learning everything from coding to website design to video editing: gone online and immersed himself in all he can find on the subject.

“I took a coding class in high school,” he said, “but have found it works best now to go online and seek the information and skills I find are needed for each project. And you learn from each one you do, getting better as you go.”

He said that because his start-up costs are relatively small—a few thousand dollars to incorporate, get needed certificates and register with the Fredericksburg Chamber of Commerce—most of the money that comes in from his agency’s jobs is pure profit.

“I’ve got a laptop and an internet connection and that’s all I really need,” he said, noting that his hope is to one day take his business full-time, complete with a staff and possibly a local office.

He’s been a bit surprised that his work and jobs are coming from all over the country, rather than the local area.

“I want to be rooted in this community, but the work comes from where it comes from,” he said.

“That’s great because you get the larger check upfront, but smaller amounts of money continuing month after month,” he said.

Branham wants to create a national website/directory of businesses owned by Eagle Scouts, to allow for networking.

“And for those customers who’d just be interested in supporting those sorts of businesses,” he said.

For his own Eagle Scout project, in 2017–2018 Branham rebuilt an outdoor classroom at the high school. He said it was dangerous, broken and unusable.

Getting a team of about a dozen others together to help, Branham tore up the old classroom, created a blank canvas on which to replace it and built a new one.

“It was more safe and sustainable and also had a more advanced design for classroom incorporation,” he said. “And just to fill out the project, we put in some new plants around the school sign out front.”

Though it would be easy to think of this young businessman as overconfident, he said that’s not the case. He knows he’s made a ton of mistakes along the way, but said each one helps him learn. He said the more apt word is confident, and that he will succeed.

He said that getting past earlier challenges—especially the outdoor equipment site that never took off—keeps him from being scared of trying. He also said it took considerable discussion with his parents to pick starting a business over attending community college.

He said the desire to start his own business has been with him for a while, and his interactions in the working world have always been geared toward getting advice whenever he could.

“I was working retail at HomeGoods, and a lot of real estate people and home stagers would come in to purchase things,” he said. “As I was checking them out, I’d ask them for tips on what they thought was important to be a success. And I’d ask the same when I’d go to a business networking session.”

So what would spell success for Branham?

“I think that will come when I’ve got enough to rely just on my own business, maybe finding a partner and few people to hire a staff,” he said.

In the more distant future, he thinks about maybe getting into real estate or money management, if that’s something that still appeals to him. He also looks forward to having the luxury of time, which he’d use partly to get back into the camping he so loved in the Boy Scouts.

“Right now, I’m tired all the time from getting things going, because I’m not turning down any work now, large or small,” he said. “But I’m enjoying every minute of it.”