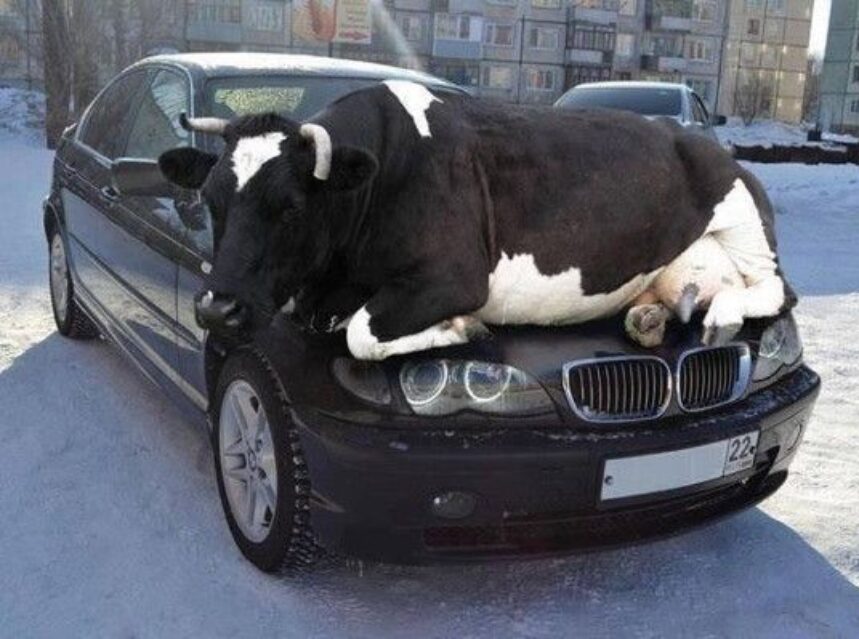 A cow seen in a photograph sitting on the hood of a car to stay warm during the winter is a digitally manipulated image. Warm cars have become make shift homes for animals seeking shelter from the colder weather. Thus, it is always smart to check your wheel wells before driving. However, you should not need to check the hood of your car for cows.

Nonetheless, this doctored image suggests that drive should be warned:

Originally shared with various joke captions, such as “Got Milk” and “The Ground is Lava,” Snopes noted that the above image did not truly go viral until it was attached to warnings about animals seeking shelter in cars during the winter.

The official Twitter account for the Roads Policing Unit in Surrey, England, was one of the first to combine this image with the warning, likely as a joke to get people’s attention. Here are some other examples of the above image being shared on social media.

Remember as days get colder animals are attracted to the warmth of cars so check wheel arches or other hiding places pic.twitter.com/wDXcKgIcK9

Remember as the days get colder animals are attracted to the warmth of cars so check wheel arches and other places an animal could be hiding pic.twitter.com/Kkngg6mCdj

Remember As Days Get Colder Animals Are Attracted pic.twitter.com/iJ5VOaWhoP

Remember as days get colder, animals are attracted to the warmth of cars so check wheel arches and other hiding places pic.twitter.com/CEgMTxEvyc

Snopes concluded its research by showing the side by side comparisons of the cow. The cow seemed content in a grassy field before it was digitally manipulated into the wintry scene.

What did you think of the digitally manipulated image showing the cow on the hood of the car? Did you believe the image was real or see people sharing it falsely on social media? Let us know in the comments section.