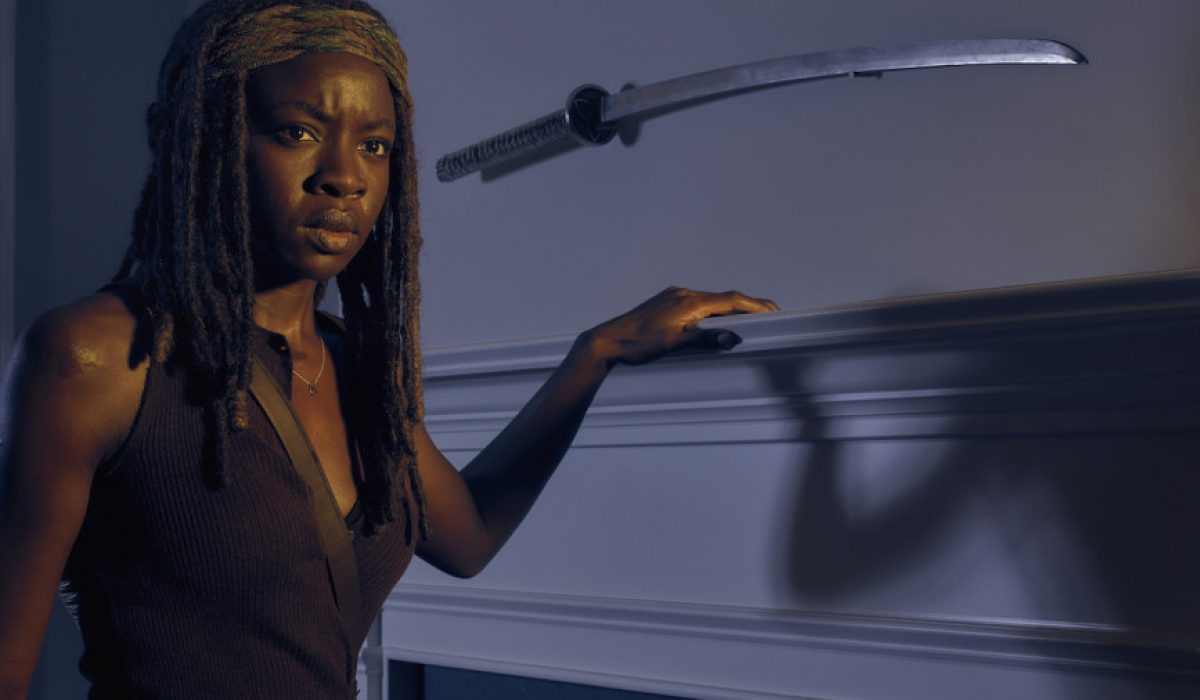 Danai Gurira has killed many zombies in her time as Michonne, the sword swinging heroine, on The Walking Dead. However, Gurira recalled a time in filming where she got a bit carried away with the slaughter of the walking dead on the AMC zombie series. But the fact that she got so carried away led to one of the most memorable The Walking Dead scenes ever.

“My favorite walker kill in the first 100 episodes is so hard to isolate because killing walkers is something Michonne deeply enjoys,” says Gurira to EW. “No, Michonne kills efficiently, not enjoyably. But I, Dania Gurira, enjoy it. But there are so many! It’s hard!”

Gurira then went on to talk about the infamous scene after the prison fell in season 4. “I really enjoy the scene in season 4, episode 9 where she kind of goes through her own catharsis through killing two dozen walkers at the same time.”

However, Gurira then notes that she was only intended to kill 10 for budget reasons.

“But then I just kind of kept going and [director Greg Nicotero] just never called cut. They just let me go and the folks playing the walkers were so awesome. They just went with whatever I did, and take after take after take, it became from 10 to 24.”

Gurira told the entertainment site that the scene is so powerful not just for the action involved, but for how the non-stop slaying served as a form of therapy for the character.

“It was such a great experience for me, Danai, to get to do the kills, but also for me as Michonne to go through that. She was feeling so many things and really choosing to live and not just meld into the death-march backdrop that she was melding into. So there’s something so full to me about that experience, not only because it was a little bit of improvised spontaneity between me and Mr. Nicotero, which was really fun and enjoyable, but also because it was such a powerful moment of her letting herself grow into the next stage and not just die off because she’s lost people.”

Gurira promises a different season compared to the brutal one last season where many fan favorites bit the bullet. Case in point it was brutal for the characters, brutal for the actors, and brutal for the viewers as Glenn and Abraham were executed in graphic fashion at the hands of Negan who saw himself set the violent tone of the season.

Based on the comic book series written by Robert Kirkman, this gritty drama portrays life in the weeks and months following a zombie apocalypse. Led by police officer Rick Grimes, his family and a group of other survivors find themselves constantly on the move in search of a safe and secure home. But the pressure each day to stay alive sends many in the group to the deepest depths of human cruelty, and Rick discovers that the overwhelming fear of the survivors can be more deadly than the zombies walking among them.

What has been your favorite Michonne moment in the series? What do you hope to see out of the character in the upcoming season? Let us know in the comments section.

READ ALSO  So many paid search campaigns, so little time. Here's how to stay ahead of it all.
Carried, Danai, Dead, Gurira, Recalls, Spree, ultimate, Walking, ZombieKilling