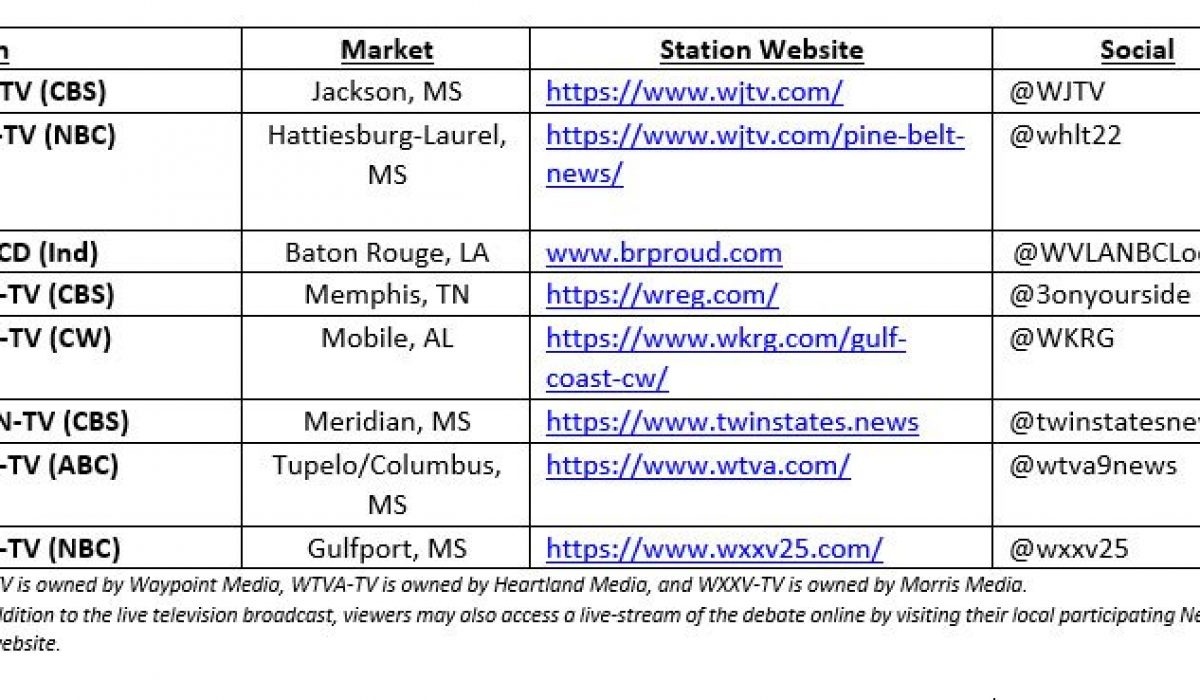 JACKSON, Miss. — Debate night is finally here! For the first time on television, Lt. Governor Tate Reeves (R) and Attorney General Jim Hood (D) will square off during primetime television.  The one-hour Mississippi Governor’s Debate is set for 7p.m. It’s their first meeting ahead of the statewide election in November.

The debate will air on five Nexstar Broadcasting, Inc., stations across the state, including WJTV-TV (CBS), WHLT-TV (CBS), KZUP-CD (Ind), WREG-TV (CBS), and WFNA-TV (CW), in addition to select television broadcast partners including WMDN-TV (CBS) and WTVA-TV (ABC), and WXXV-TV (NBC), and radio partners SuperTalk, Mississippi Public Broadcasting, and Jackson State University.  Local viewers may also access a live-stream of the debate online by visiting their local Nexstar station’s website (see table below for more information).Mississippi Governor’s Debate is scheduled to take place on the campus of The University of Southern Mississippi at the Joe Paul Theater in Thad Cochran Center, 121 West Memorial Drive, in Hattiesburg. The debate will be moderated by Byron Brown, anchorman and political reporter for WJTV-TV, and Greg Hurst, anchorman for WREG-TV Greg Hurst.

All questions to the candidates will be focused on topical local and regional issues impacting communities across Mississippi, including education, health care, infrastructure and the economy, as well as candidate-specific subjects. In addition to taking questions from the moderators, candidates also will respond to pre-taped questions from students at the University of Southern Mississippi.

The election for Mississippi Governor will take place on November 5, 2019. For more information regarding how to register to vote,  upcoming elections, including early voting dates, polling locations and voter identification requirements, please visit https://www.sos.ms.gov/Vote/Pages/default.aspx

Debate will be carried on the following television stations and Nexstar websites in Mississippi: