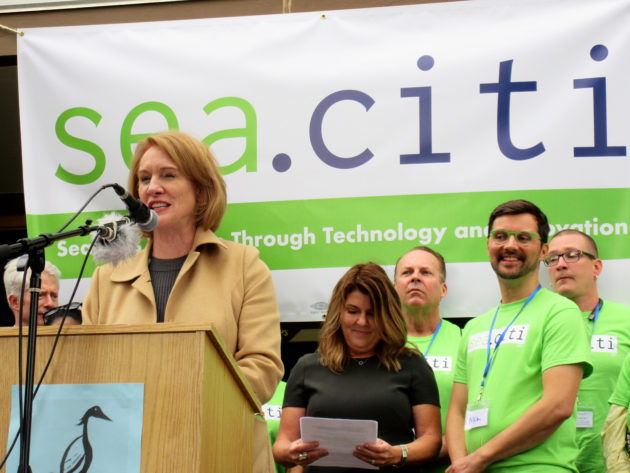 Tech workers in progressive cities such as Seattle and San Francisco have a bad rap when it comes to civic engagement.

As a Seattle Google engineer with political ambitions once said, “The little f*****s don’t vote, to put it bluntly. They are not civically engaged. They take civic responsibility lightly, and because of that they are used as scapegoats.”

But that was four years ago — and a lot has changed.

Tech is still seen by some as the villain in Seattle’s growth story but it’s becoming more difficult to charge the workers who comprise the industry as apathetic. This month, tech workers from Amazon and Google organized walkouts to pressure their employers on environmental issues in solidarity with the youth Climate Strike. Tech companies and volunteer groups are taking an active role in the upcoming Seattle City Council elections.

Sea.citi, a worker volunteer group surveyed 1,618 tech workers via invitations to their employers and industry organizations. Some 82 percent said they’re registered to vote and 52 percent of those registered say they vote in every election. About 14 percent said they are not registered or are in the U.S. on a work visa.

The top issue for the tech workers surveyed is “combatting homelessness in our region” with 62 percent ranking it as “extremely important.” Stopping the climate crisis is second, with 47 percent identifying it as the top issue they care about. Other top issues include ensuring enough affordable housing in the region and increasing public transit and bike infrastructure.

READ ALSO  Can the Chinese Tutoring Bull Be Tamed?

Sea.citi enlisted EMC Research to conduct the surveys in August and September. The research is part of sea.citi’s broader goal to encourage civic engagement in the Seattle tech industry. A coalition of tech companies — including Amazon, Expedia, Zillow, Tableau— and others formed sea.citi in 2018 to create more volunteer opportunities for their employees.

“We are really dedicated to and interested in getting tech workers to vote, volunteer or donate and there is a fairly significant gap of information out there so we saw an opportunity to fill that gap,” said sea.citi CEO Nick Merriam.

Some of the common perceptions about tech workers rang true in the research. Of those surveyed, 72 percent moved to Seattle as adults. Fifty-five percent are men, the most common age bracket is 30-to-34, and 71 percent have no children in their households.

The influx of newcomers over the past decade — drawn by lucrative tech jobs — has strained Seattle’s housing and transportation infrastructure. It’s a dynamic that has caused friction as housing prices skyrocketed and new development rapidly transformed the city.

Tensions reached a boiling point in 2017 when the Seattle City Council passed a tax on the top-grossing businesses in the city to fund affordable housing. Faced with a protracted battle with the business community, the City Council repealed the tax a few weeks after passing it. Though the legislation was short-lived, the heated debate surrounding it fomented lasting divisions in Seattle.

Less than half of the tech workers surveyed by sea.citi “feel like my participation in the community is welcomed.” Only 49 percent agreed with that statement.

Related: Amazon quietly works to reshape politics in its hometown after going to battle with Seattle officials

“They feel moderately welcomed,” Merriam said. “There’s opportunity to improve around that.”

Despite that trepidation, tech is wading into civic life.

About 71 percent of respondents say they plan to vote in local elections this November. Seven City Council seats are up for grabs in an election that could reshape Seattle politics.

Sixty-one percent of the tech workers surveyed say they’ve donated their time or money to civic issues in the past year. They were slightly more likely to donate money than volunteer their time.

Amazon has hosted several private candidate forums and events for its employees to encourage them to engage in the upcoming Seattle election. The company is also bankrolling the Seattle Metro Chamber of Commerce’s political action committee’s efforts to get business-friendly candidates elected to the Council.

Next week, sea.citi is hosting an event to connect Seattle tech workers with candidates running for City Council. The event is free and open to anyone interested in tech.

“This accompanies a lot of our work around getting tech excited about voting and it looks like, based on the data, they clearly are headed to the polls,” Merriam said.