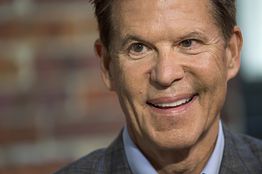 Shares of DocuSign are up by more than half since the enterprise-software company’s initial public offering in April—a surge that underscores how digital transformation is sparking economic growth, according to Chairman Keith Krach.

“Companies focused on productivity improvement are driving the economy,” Krach tells Barron’s. The company, which made its mark in electronic signatures, is scheduled to report its fiscal second-quarter earnings on Sept. 5.

DocuSign (ticker: DOCU) stormed out of the gates with strong results in its first earnings statement as a public company in June. It earned 1 cent per share on revenue of $155.8 million. Analysts had expected a loss of 7 cents per share, with $146.2 million in revenue, according to Thomson Reuters.

The rise in revenue—it was up 37% year over year—came from subscriptions, which rose 39%. For its current fiscal year, DocuSign expects $652 million to $658 million in revenue, surpassing the consensus estimate of $627.6 million reported by FactSet.

Krach declined to comment on DocuSign’s performance because the San Francisco-based company is in a quiet period preceding its second-quarter report.

DocuSign, one of a handful of high-profile tech IPOs this year that include Dropbox (DBX) and Spotify Technology (SPOT), illustrates the upside of public enterprise-software companies, Krach says. Its stock, at $61.84 as of Wednesday’s close, has increased 56% since its April 27 debut.

That success highlights how digitization and improvements to productivity underpin the economy and the U.S.’s ability to compete globally, especially in automated factories and retail, the chairman says. “Speed is the ultimate weapon. Speed is the currency,” says Krach, a former auto executive who co-founded digital marketplace Ariba Network.

Krach saw it first-hand, more than three decades ago while at General Motors (GM). Embryonic work in robotics on the assembly line opened his eyes to the possibility of how technology would bring efficiency and speed to a decades-old process.

The tech sector could be far more innovative, Krach says, if it succeeds in bringing more women into the industry. “Diversity of thought is the key catalyst for genius,” says Krach. “It is the secret sauce for building a high-performance organization.”