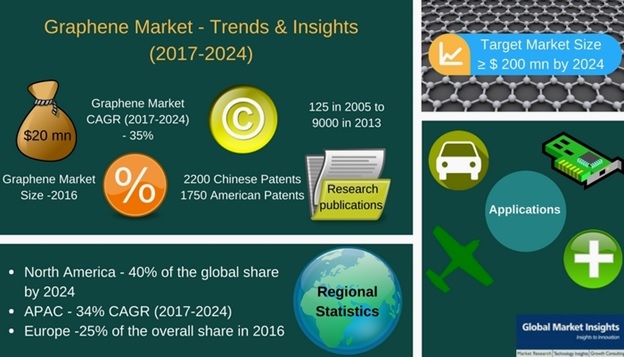 With an endorsement of possessing unique material properties, graphene market is aptly bringing a revolution across myriad end- use domains. The past few years have witnessed immense breakthroughs in graphene research, which not only have led to significant advancements in its mass production, but also have gathered enough substantiations to widen its application matrix.  Graphene, rightly nicknamed as ‘wonder material’, offers a unique combination of tensile, thermal, mechanical, and optical properties. The profitability quotient of the graphene industry can be primarily credited to this fundamental aspect. Recognizing the potential contribution, various governmental entities are also taking profound initiatives with regards to graphene research and commercialization.  For instance, an investment of USD 1.3 billion by the European Union in ‘The Graphene Flagship’ in 2016 is a significant step taken toward the development of regional graphene industry. The U.K government has been quite proactive with regards to its involvement in the proliferation of graphene technology- evidence of the fact is the recent funding of USD 353 million by the British Administration.


Global market Insights, Inc. forecasts graphene market to exceed USD 200 million by the end of 2024, with a massive CAGR of 35% over 2017-2024. The projected figure is almost ten-fold of the valuation recorded in the year 2016, which is deemed to be a positive indicator by the research analysts for the overall business growth across varied end-use sectors. Brainstormed by the Manchester University researchers in 2004, this first 2D atomic crystal has the potential to disrupt almost every business sphere-from polymer composites to flexible electronics. The expansion in the application landscape of graphene market has been extensively driven by the so far progress in graphene production through the exploitation of the material properties pertaining to specific applications.


The so dubbed ‘magic material’ took the world by storm when its unrivalled combination of properties came into light. Electronics sector is profoundly one of the significant spheres where graphene market penetration has been incredible. Today, consumer electronics rule the roost. Statistics and data gathered so far further reconfirm the proliferation of electronics industry over the past few years. As of 2015, estimates depict that over 65% of the U.S. adult population owned a portable electronic device. Looking at the extensive developments, tech giants are increasingly investing in R&D activities to improvise the electronic devices for a better efficiency, which by extension is upscaling graphene industry demand in electronics applications.


Procuring almost 30% of the overall graphene industry share in 2016, electronics sector covered a major chunk of the end-use landscape. The exceptional electrical properties of graphene make it a suitable choice for high-performance electronic devices that can even surpass the state-of-the-art. Flexible electronics take the advantage of its mechanical properties as well as conductivity. Integrated circuits based on graphene are already operational at hundreds of GHz bringing highly improved performance across varied domains, such as data processing, wireless communication, sensor systems., and power electronics sector. Integrating graphene into batteries increases the performance enormously. In fact, if experts are to be relied on, graphene market can soon penetrate into the smartphone sector, providing an alternative to conventional silicon based memory chips, which is comparatively much brittle. The data demonstrates a vivid picture of graphene market potential in electronics industry. In fact, graphene based memory chip has the potential to increase the energy storage capacity by tenfold, with a lower power consumption and a high memory access speed – another profound base fueling graphene market share in electronics domain.


Like any other fraternity, graphene industry has also been substantially swayed by technological advancements- evidence of the fact is the continuous involvement of the researchers in further restructuring high frequency transistor model. Scientists from Japan’s Tohoku University, the Institute of Physics and Technology RAS, and Moscow Institute of Physics and Technology have recently developed a new type of bilayer graphene based transistor modelling which is claimed to have ultra-low power consumption than any other silicon based device. Researchers have finally concluded that graphene is an ideal material for low voltage electronics as low power consumption increases the clock speed of the processor by many folds.


Another particular sphere where graphene market commercialization is witnessing a major high is in phonics and optoelectronics sector. Graphene photodetectors are currently the most studied photonic devices of recent times. Unlike semiconductor based photodetectors, graphene photodetectors by principal have a wider spectral width ranging from ultraviolet to infrared. One of the fundamental reasons behind the intense penetration of graphene industry in photonics sector is the high operating bandwidth of graphene material, which makes it an appropriate choice for high speed data communications. In fact, findings from a combined study undertaken by the Vienna University of Technology and AMO depicted that graphene based ultra-high-speed photodetectors are capable of transmitting data at a record speed of almost 100Gbit/ sec.


Another standout property of graphene is that it can transmit up to 97.7% light and pertaining to this criterion, graphene market is generating a substantial revenue from its wide spectrum of applications in optoelectronics, such as LCDs, LEDs, and touch screen. For a material to be used in optoelectronic sector, the transmission rate should be minimum 90% and the material conductivity should be extremely high. Graphene possessing all these properties excellently, allow the investors to bet big in the graphene industry.


Speaking along the similar lines, graphene’s unmatched combination of electrical and mechanical properties is also allowing the market players to exploit its potentiality across other domains as well.  Reaffirming this above statement- the University of Cambridge, ICFO, Emberion, University of Ioannina, and Nokia R&D UK have used graphene in infrared thermal detectors and it has been concluded that graphene based thermal detectors are sensitive enough for screening applications. Graphene based detectors are also opening up possibilities for thermal imaging, which in a way is also pushing graphene market application matrix. In fact, experts claim that graphene camera which is presently under development stage will profoundly be a strong contender with regards to the application landscape of the market in the ensuing years. Reportedly, these cameras will be used for night vision, security and inspection purposes once onboard.

READ ALSO  10 Tips for Mastering Your SEO Content in 2020


The demand for hybrid and electric vehicles is on a surge, a factor that has significantly upscaled graphene batteries market demand. Statistics bearing an evidence to this- the overall graphene battery industry size was approximately USD 15 million in 2015, and is slated to record a valuation of USD 97 million by 2024. The projected figure itself is quite a proof enough of the humongous growth this particular business sphere is likely to unfold in the coming years, which in no surprise will leave a proportional impact on the overall graphene industry dynamics.


Automotive applications accounted for 20% of the global graphene market share in 2016. Flexibility and mechanical tensile strength are the key driving properties leading to increased deployment of graphene in automotive sector. In 2015, Spania launched world’s first graphene incorporated supercar in the Geneva Motor Show. Down the line of coming six to seven years, analysts believe that graphene will be extensively deployed in vehicle manufacturing, subject to the fact that it reduces vehicle weight, fuel consumption, and above all results in lesser carbon emission. The overall graphene industry from automotive applications is likely to grow at a striking CAGR of 34% over 2017-2024.


The profitability quotient of graphene market is claimed to be phenomenal in the coming years with its expanding application landscape. Having said that, it is prudent to note that there are several challenges that need to be addressed before exploitation of graphene era can be fully realized. The primary hindrance in the growth path of graphene market is the pricing parameter which restraints graphene production at affordable price. However, many international academia and research organizations are rigorously introducing new methods of graphene production to overcome the challenge as soon as possible.  Another hurdle that graphene industry players are dealing with is the established supply chain of other electronic semiconductor materials, such as silicon. To score an advantage in the present scenario, graphene must be produced and supplied at a competitive pricing to become ubiquitous in the electronics sphere. However, considering the rapid pace of developments in a comparatively short shorter span and extremely unique blend of properties of Graphene, it is overt that graphene market will become the next disruptive trend in the specialty chemical space.