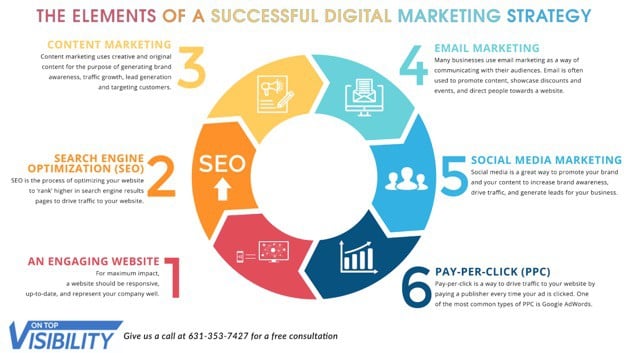 Search Engine Marketing is the primary type of Digital Marketing. Search Engine Marketing (or “SEM” for short) helps all businesses use the Internet to strategically grow to the next level by using different types of search engines. The most popular search engines are Google, Yahoo and Bing. SEM utilizes the engines to optimize your business via paid or free advertisements. There are multiple types of Digital Marketing and SEO campaigns that you need to know about and in this post we’ll break a few of them down for you.

Search Engine Marketing is also known as Paid Advertising. With its use of Google AdWords, SEM provides you with traffic through the Google search engine. Advertising on Google will only cost you a fee and then the company will promote your business on different platforms. Through YouTube and other streaming apps that advertise, SEM makes it easier to market your business on desired platforms and get customers to purchase your product. This is another type of paid advertising, but the risk is limited compared to other forms. Through SEM, you can reach larger websites and owners to post an ad and hit your target audience.

Search Engine optimization is the most known process for optimizing a website by using various keywords to make your site show up on Google. Investing in SEO is key to having a successful website. The Google search engine will display the top websites using specific keywords in their articles and blog posts. Getting the density of your keywords to a sweet spot will attract more visitors on your website and should increase revenue, making SEO one of the most important factors in developing a successful online marketing strategy.

Marketing also works on other web platforms. For example, marketing via email is perhaps one of the best strategies you can utilize to promote your business and products. If you need to update your clientele and consumers, an email blast is one of the easiest and most convenient ways. This allows you to build a sense of trust and great reputation with your audience.

Content Marketing is used to target a larger audience by providing detailed information about the product. The focus on multiple customers will allow the company to gain and retain value. You can even use social media platforms like Instagram, Twitter and Facebook to promote your business and products. There’s also Radio Marketing. Just imagine: you’re sitting in your car and you turn on the radio and you hear all the ads and promotions while listening to your favorite song.

READ ALSO  A freelancing boom is reshaping Bangladesh and its economy

Another form of marketing is Pay-Per-Click. This happens when a user clicks on a website’s link to an ad. There are many types of Marketing Strategies that can be used to improve your business and revenue. If your know your business, have a great strategy and reputation with consumers this will all lead to forward progress. This is primarily referred to as Business to Consumer and Business to Business.

· Customer Building should be the main focus of marketing. You need to gain and improve on your customer loyalty and try to develop the best relationship possible with existing users.

· Cloud Marketing is a process that organizations use in an effort to market their goods and services through an integrated digital experience.

· Communicating via a diverse group or cultural program.

•Traditional Marketing is promoting or advertising through any form of printed media, Television or even via an online platform with Paid or Pay-Per-Click (PPC) adverting.

· Stealth Marketing is another strategy that is mainly used when the users are not aware they’re being marketed to.

· Offering Discounts, Combo offers and Shopping Coupons. This strategy will provide incentive for the targeted audience to shop more.

· Cause Related Marketing is another type of Traditional Marketing. It’s a collaborative effort between corporations and nonprofits to promote a good cause and boost the profits of a corporation.

Now you should be aware  of the different types of Digital Marketing Strategies and the different kinds of platforms used to market products.

Ben Affleck is officially out as Batman and it’s a pretty sad day.

Words cannot describe how sad I am to see Ben Affleck announce that he’s no longer Batman. His Batman is why I do what I do. In Batman v Superman: Dawn of Justice, I fell in love with his comic book-accurate interpretation of the Caped Crusader. It was a breath of fresh air and it felt like we finally had the one true Batman.

Three years have quickly sped by and we’re officially going to receive a new Batman for his next movie. Last night, Ben Affleck announced that he will not return as the Dark Knight in Matt Reeves’ The Batman and now everyone’s attention has moved towards wanting to know who the next Bruce Wayne will be. Matt Reeves is said to want an actor that’s around 20 years younger than Affleck while Warner Bros. wants someone older. My guess is that Reeves wants a fresh start while the studio wants an older actor for crossover potential.

READ ALSO  How To Increase Non-Brand PPC Profits by 650%

In this list, I will discuss the actors I think can replace Ben Affleck as Batman using the parameters that Matt Reeves and Warner Bros. want. Hit Next to see our picks to play the Batman.

Michael Fassbender is an X-Men alum and no stranger to comic book franchises. The actor has shown multiple levels of range and could definitely handle the Batman/Bruce Wayne personality. If they go with the older range for the next Dark Knight, then Fassbender is probably one of the best choices to take over the role.

Ben Barnes is out of a job after The Punisher season 2 and he’s one of the best actors in that series. The second season tied up Barnes’ arc on The Punisher and the actor has already told us that that he’d love to play the Caped Crusader. Barnes definitely has the pretty boy look going on for him and I wonder what his take on Bruce Wayne could be.

I’ve said this before and I’ll say it again: Ryan Gosling needs to star in a superhero movie. I’ve always thought Gosling would make a great Batman. Every role that he’s done has shown us his capability and he could crush it as Bruce Wayne.

Jon Hamm is my top choice for an older Batman. If Warner Bros. wants to cast an older actor for crossover potential, Jon Hamm is the studio’s best bet. He has a similar look to Ben Affleck, and c’mon, the guy’s look just screams Bruce Wayne.

Armie Hammer is 32 years old and was cast as the Caped Crusader in George Miller’s Justice League: Mortal. That film will never see the light of day, but that doesn’t mean that Hammer doesn’t deserve a second shot at being the Batman. He’s charming, broody and will probably give his all for this role. Armie Hammer is a great option because he’s young enough for Matt Reeves and Warner Bros. could work in a way for him to crossover with the rest of the DC Extended Universe.

Game of Thrones alum Richard Madden is my top choice to replace Ben Affleck as Batman. The actor is young, has the look and definitely has the acting chops to play the duality of Batman and Bruce Wayne. Madden just won the Golden Globe for Best Actor in a Television series for the BBC drama Bodyguard, so Warner Bros. may want to quickly snatch him up.