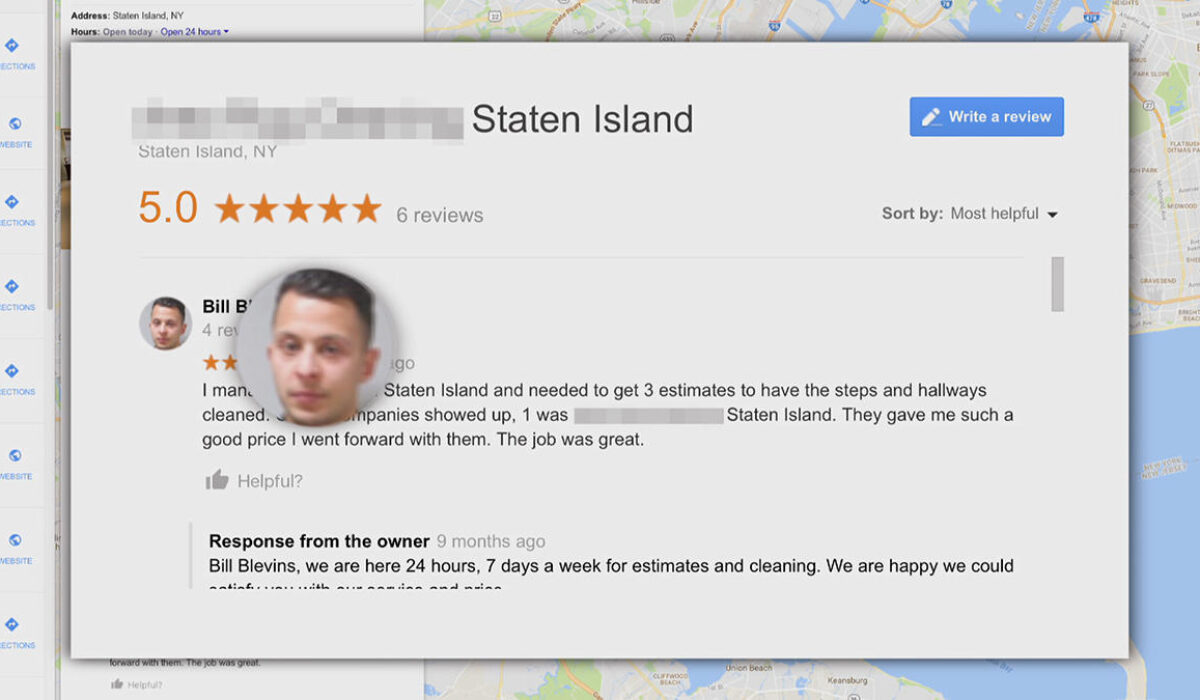 More than 80 percent of people sometimes check reviews for businesses, but half wonder if they can be trusted, according to the Pew Research Center — and they have good reason to, according to experts in online reviews.

“I laugh at the absurdity of some of the reviews I find,” said Jason Brown, who founded the website reviewfraud.org, which lists thousands of businesses with suspicious reviews, including more than 200 in the tri-state area.

Brown pointed to one review of a rug-cleaning company on Staten Island. The man who left a five-star Google review? It’s a suspect from the 2015 Paris terror attacks. The same user reviewed another cleaning company in Oregon.

NBC Los Angeles spotted another familiar figure in a review for an air-conditioning company, supposedly by Marilyn R. Park.

“I absolutely am not Marilyn R. Park,” said the woman in the photo, who’s actually Alicia Kozakiewicz, a nationally known crime victim advocate who survived an abduction at age 13.

A law firm with offices in Queens and Manhattan says they had no ideas there were questionable reviews on their site. The firm gets very high marks on Google, including a review by a man named Mack Soto, whose picture is that of a reality TV star named John McGuire.

The firm’s lawyer told the I-Team in a statement, “Our firm had hired a third-party search engine optimization company,” and that it “had not seen and was not aware of these reviews.”

Fake reviews are a big business, according to Dr. Ted Lappas, who studies online reviews at the Stevens Institute of Technology in Hoboken, New Jersey.

“You can hire them, and among other things they offer this service, a review service. So you can hire them and they do that for you,” he said. “You basically say, ‘I want this many reviews, either good reviews for me or bad reviews from the competitors.'”

Money can be a motivator. A 2016 Harvard study found that a 1-star rating increase on Yelp can boost an independent restaurant’s revenue by up to 9 percent. But there can also be a dark side.

Jeffrey LaViano, the owner of a New Jersey-based jewelry store, believes he’s the victim of a false review by a vendor with a vendetta.

“Unless I was taking my credit card out, and signing up for their step-by-step process to clear my name, they weren’t interested in having any conversation,” he said.

Yelp says it relies on users to flag suspicious reviews and then it investigates, posting a consumer alert when it finds signs of deception. Google says it uses automated systems to detect spam and fraud in reviews.

In New York, the attorney general has been cracking down on companies that produce fake reviews. In 2013, the AG fined 19 companies $350,000 for flooding the Internet with fake reviews, and the office has fined six more companies since then.

READ ALSO  3 ways to use social for experimental marketing sucess