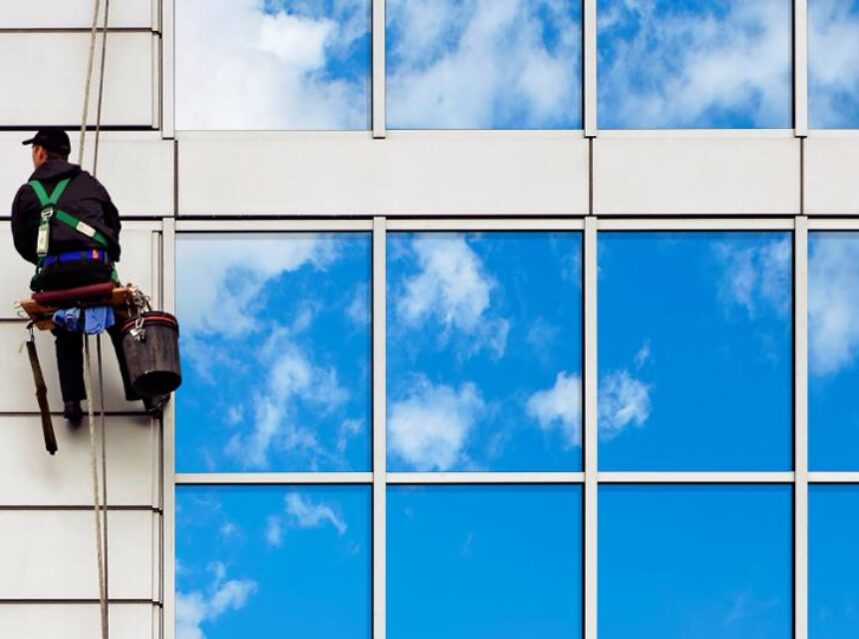 Sometimes a sacred trade gets passed down from generation to generation, culminating in a deeply meaningful time-honored tradition. And sometimes three college buddies get stuck in traffic, see a human being strapped to the side of a building, and realize there’s a safer, more efficient way to clean a window these days.

Andrew Ashur, David Danielson, and Adrian Mayans are three such friends. None of them had professional experience flying drones or washing windows, but they were able to synthesize those ideas into a viable solution when they were stuck in traffic that day. The North Carolina team soon ran some experiments, bootstrapped an operation, and gained market traction.

Now Lucid Drone Technologies has funding from Y Combinator on top of almost $400K in signed annual revenue. I caught up with co-founder and COO, Adrian Mayans, to discuss the untapped potential of drones, the importance of retraining workers, and the bustling North Carolina startup scene.

This transcript has been edited for brevity and clarity.

What problem are you solving?

Adrian Mayans: We started Lucid out of a humanitarian concern. My co-founders and I were driving into Charlotte one afternoon and we saw a window washer hanging from like 250 feet. We said that literally has to be one of the worst jobs in America.

We knew this was a problem that we needed to fix, the whole concept of getting human workers off of dangerous equipment. They’re either up on lifts, or scaffolds, or ropes. And as we got into the space, on top of all the egregious accidents and deaths that result from outdated equipment, we realized that there was an issue in terms of efficiency.

It can be nerve-racking to walk underneath a window washer on the sidewalk. You look up and there’s a person dangling from a rooftop in a harness.

Adrian Mayans: There was actually a guy cleaning a roof that fell to his death about a month-and-a-half ago. Yeah, I mean literally 10 minutes from where we started this company. This guy died, fell to his death less than two months ago. It’s a real-life horror story sometimes.

But now you’re in a position to change all that. I read that you already have $33K in monthly recurring revenue.

Adrian Mayans: That’s $33K in signed MRR. We’re pursuing the Tesla Model, where you prepay and get on a waiting list. So we’ve had signups for 11 drones because we currently lease them at $3,000 a month. We’ve actually started launching our first customers and have plans to scale in the spring.

How did you start out and what’s your business model?

Adrian Mayans: We knew that we needed to prove the concept, so we started as service providers. We cleaned a bunch of properties to prove that drone cleaning works, and works well. And then cleaning companies reached out to us, saying, “Hey, we saw that you guys are cleaning with a drone. Where can we get one?”

That’s when we took a step back and said instead of trying to break into services, why not become the company that empowers all these other companies to do their work? These companies are already out there cleaning and we just put the drones in their hands.

Now we’ve left services entirely and have been heads down, focused on being a technology provider for almost a year now, improving our hardware and software around the clock, and streamlining our build process. We were fortunate to start out as service providers though — that experience gave us an intimate understanding of the cleaning space and it informed our product development.

We also formed a partnership with Drone Pilot Ground School, which is an online training program that FAA certifies remote pilots. So we walk our users through the FAA certification, and then they come down to Charlotte, and we take them through in-person training, so they can use the system.

I love that. It’s not like you’re asking a factory worker to learn Javascript. You’re asking someone who washes windows to professionally fly a drone to wash windows.

Adrian Mayans: Yeah, we don’t want to take these people’s jobs. All we want to do is take them off dangerous equipment and relocate them to the ground to fly our drones.

I assume you code your own software, but do you build the physical drones in-house?

Adrian Mayans: We actually build our own drones in-house now. At first, we took a DJI drone off the shelf and built a bracketing system on the bottom of it. We quickly realized that, while it worked conceptually, there were limitations to using a third party drone.

Now we do the whole product in-house, from carbon fiber cutting to assembly, which allows us to quickly iterate and expedite our product development process. We’ve gone through over ten different design configurations, flown and tested various flight systems, and found what works best for our specific use case. Some changes have been minimal, not really noticeable to the average eye. Others have been as big as switching from an octocopter to a hexacopter — eight arms to six arms.

Cleaning with drones is unlike any other drone application, in that it’s a variable payload. The way we do it, it’s a tethered system that feeds the drone the necessary fluids to clean effectively. The drone still has a bracketing system on the bottom of it that easily connects to a cleaning hose. The bracket then has a barrel that extends out from the body of the drone and the cleaning fluids are sprayed out of the barrel. All of the cleaning equipment stays on the ground level — the drone is just the vehicle that carries it up to the necessary height.

How do you look at software development, and how autonomous do you ultimately want these drones to be?

Adrian Mayans: We make the software as easy to use as possible. User friendliness is our biggest goal. We realize people with no drone experience will be cleaning and flying our drones. We go to great lengths to make sure anyone can fly our drones.

On the software side, right now it is operator driven. It is a pilot actually flying the drone. Our software efforts to date have gone towards making the pilot’s experience as smooth as possible, and we’ve gotten it to a point that our first trainee literally said “I think an 8 year-old can fly this thing.”

We’re now turning our focus towards automation, because in the long-term, there is undoubtedly an automation play to be made. We think the on-ground operator will always be a necessary component, but we have a pretty clear understanding of the processes that can be automated on jobs to minimize the need for pilot input.

So Y Combinator must have loved you guys because you’re bootstrapped, you have a humanitarian angle, and you have a long-term AI play. What was your pitch to YC?

Adrian Mayans: Our pitch to YC was that the cleaning space is extremely antiquated. We have a way to make building cleaning safer and faster, and fix the biggest pain points for these cleaning companies. While we see endless potential and applications for drones, cleaning is very much in need and we have a product that already satisfies that need.

There are so many different applications for your drones once you get the software right. You can take on any of the hazardous jobs that a human shouldn’t have to do anymore.

Adrian Mayans: Yeah, and at the end of the day, we have a limited amount of square footage on Earth. The only way to go is up.

That reminds me of a Discovery Channel series I used to stream on Netflix called Extreme Engineering. They would do 3D renderings of massive skyscraper cities.

Before we go, I want to ask you about the North Carolina startup scene. It’s gained a reputation in recent years. What’s the landscape like out there?

Adrian Mayans: Charlotte itself is growing quickly. I mean, it’s growing fast. Obviously, the scene was pretty predominantly banking and now tech is working its way in here.

Honestly, from my experience, it all stems from the large number of high quality schools in the area. My co-founders and I went to Davidson, a highly selective liberal arts college. You have Duke and UNC within a few hours drive, which are both highly selective universities. And not many people are aware of NC State’s top notch engineering program.

We’ve also worked with local students and faculty at UNC Charlotte’s computer science department. They are doing some impressive things over there. I mean, innovation is inevitable when you have a lot of 22 year-olds with big dreams and intelligent minds seeing problems and saying, “Hey, why not fix it ourselves?”