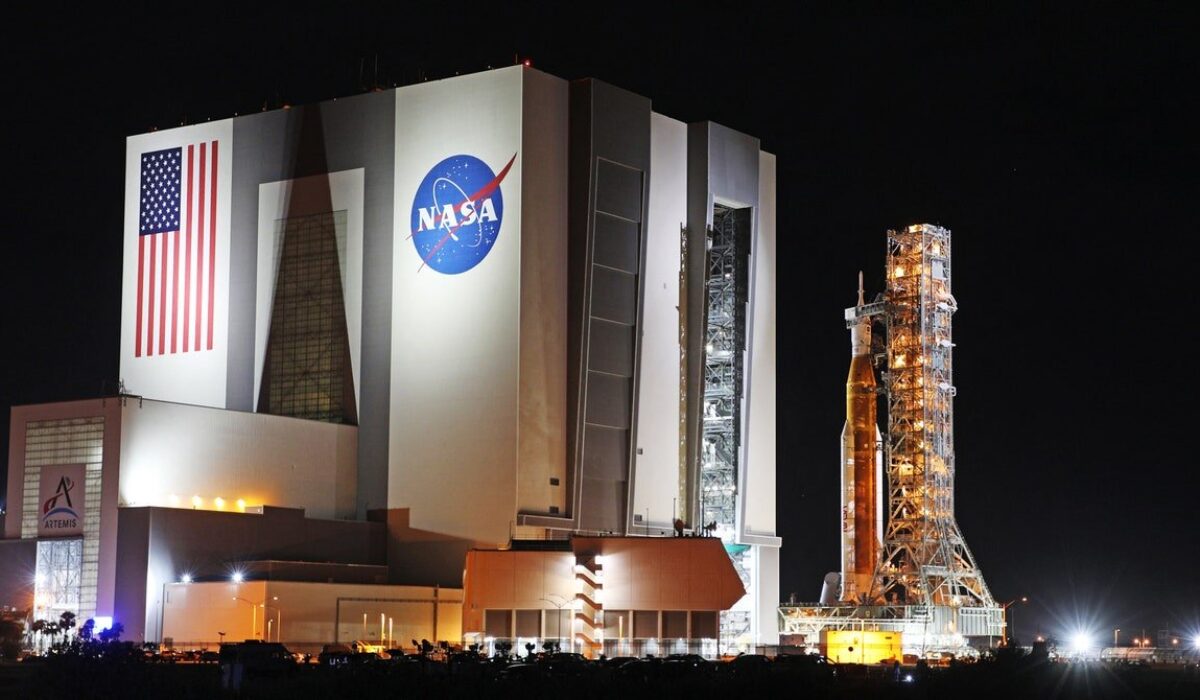 After years of delays and several false starts, the wait is finally over: NASA’s massive Space Launch System rocket and the Orion capsule lifted off at 1:48 am Eastern time, heading for a historic lunar flyby. Crowds of onlookers watched at the Kennedy Space Center in Florida, where the thunder of a NASA rocket could be heard once again at the same launchpad where shuttles and the Apollo missions began their journeys into space.

The 212-foot rocket, including an orange core stage and two white solid rocket boosters, had rested upon a ground structure called the mobile launcher, as it had during earlier tests. As the boosters ignited, the rocket lifted above an explosion of flames, and then it quickly cleared the launch tower, and then began its ascent through the atmosphere, an ombre orange streak blazing behind it. “Liftoff for Artemis 1,” proclaimed Derrol Nail, NASA’s livestream commentator. “We rise together, back to the moon and beyond.”

After the two-minute mark, the SLS boosters finished burning through their propellant and fell away. About eight minutes after launch, the core stage rocket used up its fuel and separated, too. That left the uncrewed Orion capsule still attached to the upper stage rocket and the service module, provided by the European Space Agency, which supplies the spacecraft’s main propulsion and power. Orion continued on at over 16,000 miles per hour, and a few minutes later, it deployed its solar arrays.

If the mission goes according to plan, after about two hours, the capsule will separate from the SLS upper stage. As it drifts away, the upper stage will then disperse—in batches—10 small spacecraft known as CubeSats, sending them out to conduct mini missions around the moon, Mars, and a near-Earth asteroid.

Meanwhile Orion will fly on, taking about 10 days to reach the moon, where it will spend a couple of weeks in what’s called a “distant retrograde orbit,” which balances the gravitational pull of the Earth and moon and doesn’t take much fuel to maintain. While circling the moon, it will take images of the Earth and its satellite—including one like the iconic “Earthrise” photo taken on the Apollo 8 mission—and collect space radiation data, so that scientists can learn more about potential health risks for astronauts on extended trips beyond the Earth’s protective atmosphere.

At the end of November, Orion will leave that orbit and cruise 40,000 miles beyond the moon—the farthest a spacecraft capable of carrying humans has ever traveled—before slingshotting back past it en route to Earth in early December. Its 26-day trip will end when it splashes down under parachutes into Pacific Ocean waters about 50 miles off the coast of San Diego, probably on December 11.

Members of the Artemis mission team are ecstatic that this moment has arrived—and also anxious about the first major moonshot since the Apollo era. “I’m excited to kick off this Artemis mission series to go back to the moon and basically start a new era that will represent deeper space exploration, and on to Mars one day. I’m most excited to watch that rocket turn night into day tonight when it takes off. It’s going to be spectacular,” said NASA astronaut Christina Koch, speaking earlier Tuesday before the launch. There will be many scientific, economic and other benefits to the Artemis program, she says, thanks to NASA’s international and commercial partnerships, and it will help inspire the next generation of space explorers.

READ ALSO  The Best Laptops for School by Major in 2019