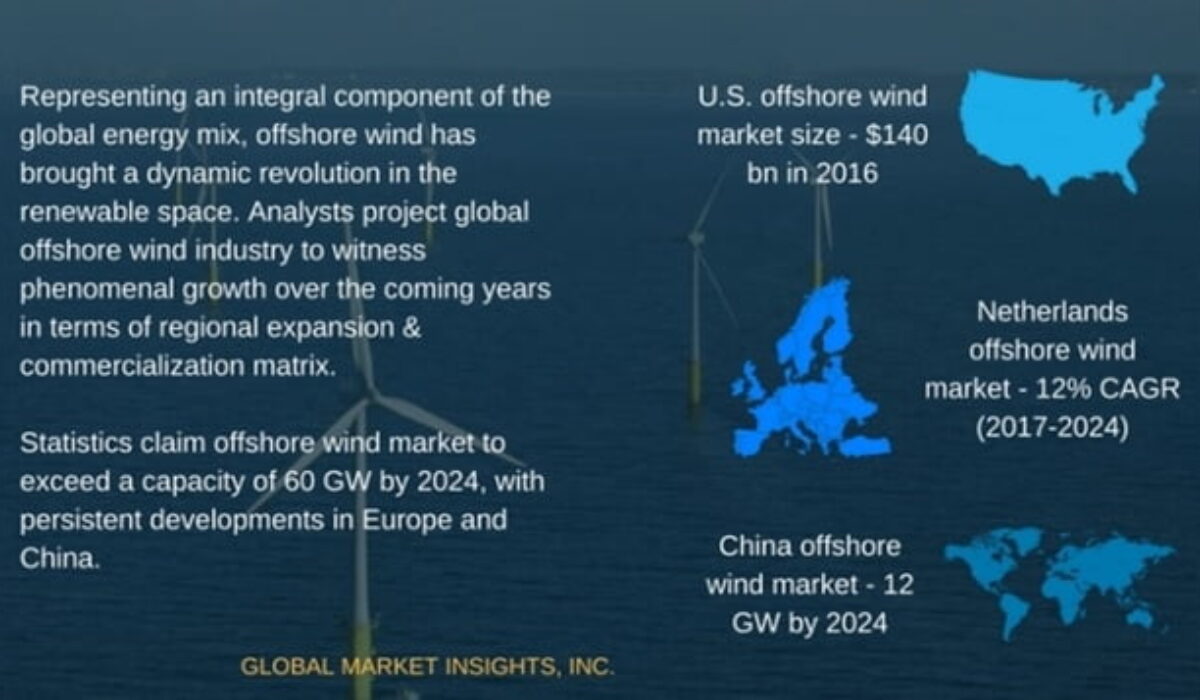 Global offshore wind market has truly gained velocity in the recent past, and is currently in the midst of a rapid growth trend. In the worldwide quest for clean and sustainable energy sources, wind power is becoming incredibly significant to the global energy mix. Today, wind energy is considered as one of the most mature renewable energy sources, having come a long way since its first validation in Denmark, around two decades ago. The Global Wind Energy Council (GWEC) has rightly claimed that “the renewable energy system will be led by wind.” Subject to this fact, offshore wind industry is gaining significant momentum, as it is expected to contribute majorly in accomplishing renewable energy targets in the coming seven years and beyond.


Currently, North America, having partially completed its first commercial offshore wind farm, is marked as one of the most lucrative regions for the expansion of offshore wind market. As per sources, America’s Block Island Wind Farm, off the cost of Rhode Island is projected to produce enough electricity to power more than 17,000 homes initially. While the U.S. demonstrates a huge present-day market potential, China is rightly being marked as a wild card entry. Lately, China has aggressively added wind energy to its renewable energy capacity and the country may very well emerge as offshore wind market leader over the coming years.


For the year 2014, offshore wind industry reached a total capacity of 8759 MW worldwide, of which more than 90% of the installed offshore wind-farm capacity, was in Europe. The continent in particular has experienced huge offshore wind market expansion in last few years. Including the sites presently under construction and those in the planning stages, there are over 84 offshore wind power plants in 11 European countries. Despite this figure, it has come to notice that offshore wind power contributes to just 1% of EU’s total energy mix. However, the regional offshore wind industry is on a rapid growth trajectory, with over 30% y-o-y increase in its installed capacity in the recent years. This development is dominated only by a handful of the countries, where UK represents the world’s largest offshore wind market, which accounts for about 36% of the installed capacity. Followed by UK, Germany offshore wind market stood in the second place with 29%, further trailed by Denmark (8.8%), the Netherlands (7.8%), Belgium (5%) and Sweden (1.4%).


China – where the future lies


As more countries explore their renewable energy potential, the growth of wind energy is certain to deviate from its usual growth grounds – Germany, UK, to other geographies including China, Brazil, and Chile.


In 2016, China raced ahead of Denmark to secure the third place in the global offshore wind industry rankings after UK and Germany, by accounting for 11% of the total installed capacity. Rise in financial leveraging facilities and government aided funds for the development of sustainable energy projects has exponentially uplifted the regional offshore wind industry size. In 2014, China had a total of 226 offshore wind turbines and is observed to speed up its developments to accomplish its clean energy targets. For instance, the State Power Investment Corporation in the fiscal year 2017 has sanctioned huge investments and has declared its plan to develop an 800 MW wind farm across the cost of Jiangsu and Yancheng.


Offshore wind power plants are highly capital-intensive. Currently, offshore wind investment costs are two times higher than the onshore wind, which is mostly due to the huge structures and complex logistics of installing the towers in water bodies. In fact, the upfront investment costs make up to for more than 75% of the total lifetime cost.  The financial aspect is thus touted to be a key hindrance in the expansion of offshore wind industry share.


Of all the components, turbines are the costliest ones used in offshore wind projects, which account for 40% to 60% of the total investment cost.


Bringing the associated costs down to a point, where this green energy source can compete with coal, oil, and nuclear power will be a major challenge that offshore wind industry players will have to tackle. However, quite a few experts are optimistic about the prospects. Researchers, alongside offshore wind industry giants are constantly experimenting and developing on project design life, turbine performance, and on improving operation efficiency to reduce the overall investments. This in turn is set to create huge opportunities in offshore wind market which is encroaching towards cheaper wind energy.


It is most likely that in locations with copious sunlight, solar energy will outpace wind energy. This has created tremendous growth opportunities for solar PV glass market and solar PV module industry.  The huge investment costs associated with offshore wind energy have led to it being included among one of the most affluent sources. However, this notion has radically changed with technological developments, making the cost of offshore wind parks as low as onshore wind energy.

From a global point of view, in most of the cases, both these technologies are quite complimentary to each other. While solar energy provides abundant power during the day and in summer, wind is at its peak in the night and in the winter. These points demonstrate the compatibility of solar and wind energy sources, thus, the integration of these two will be abundantly beneficial, as the electricity market takes a quantum leap from fossils to renewables.


The activities across offshore wind industry have an immense potential to create and support thousands of jobs. By the end of the year 2016, wind industry had created around 1,155,000 jobs across the globe. The U.S. offshore wind market has also taken a leap to the point where the fastest growing job in the nation is considered to be that of a ‘wind energy technician.’ The U.S. Department of Energy projects that around 160,000 U.S. jobs could be created from this multi-billion-dollar industry.


Compared with other renewable energy sources, offshore wind industry is on the verge of becoming a mature and balanced energy powerhouse, thanks to its favorable base load characteristics. The other negative external factors only have a limited influence on the offshore wind power, as they are located far away from residential areas. Thus, offshore wind farms do not pollute the environment, and the noise associated does not cause a nuisance.


However, the main challenge for the offshore wind industry, is the exorbitant costs associated with its installation, operation, and maintenance. In 2015, the approximate production cost of energy for offshore wind was 153 EUR/MWh, compared with solar photovoltaic power of EUR 117/MWh. Despite this difference, the prominent offshore wind market players are aiming for cost reductions to an LCOE of 100 EUR/MWh, increasing market scale, and technological advancements with larger & more efficient turbines. For instance, Dong Energy has set a goal to cut down costs by 35% to 45% by 2020, on account of which it has collaborated with the Oxford University for more efficient designs of offshore wind turbines.


Such instances will play a major role in reducing the overall costs. Moreover, with advancing turbine technologies and cost-effective installation, it is quite obvious that the costs have already started to drop from what they used to be in 2014. With an estimated capacity of more than 60 GW by 2024, offshore wind market has been predicted to experience excellent growth prospects over the forthcoming years.