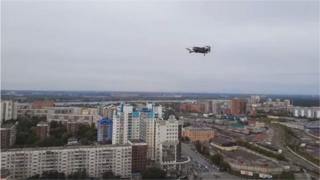 A Russian activist used a drone to get his data out of his high-rise flat when police came to search it.

Sergey Boyko says he sent hard drives to a friend by drone when police banged at his door at 10:00 local time, to avoid them getting hold of the data.

The search was part of a nationwide crackdown on the opposition.

Around 200 raids have been carried out in the past few days after the ruling party suffered major losses in local elections in Moscow.

A YouTube video taken (in Russian) by a female companion shows Mr Boyko, who lives in the Siberian city of Novosibirsk, releasing a drone from his flat in a tall apartment block as police wait to be let in.

The activists say the raids are a form of revenge by the authorities for the setbacks.

Mr Boyko’s companion says the couple were woken by loud banging on the door, to find men in civilian clothes and masks demanding to be let in.

The drone was loaded with various hard disks, solid-state drives and flash sticks containing “very important” information that he did not want to fall into the police’s hands, according to the activist.

“Done. The evacuation has been carried out. The drone reached its destination,” he says at one point.

The video then shows what appears to be an attempt to break down Mr Boyko’s door after he refuses to let police in before obtaining proof of their authority.

He finally let them in following negotiations through a lawyer.

Thursday’s raids in more than 40 Russian cities were carried out as part of a criminal investigation into suspected money-laundering by the Navalny campaign.

Opposition volunteers were taken away for questioning. Computers and phones were confiscated, and some activists’ personal bank accounts were frozen.

The organisation’s headquarters in Novosibirsk were also searched.

Mr Navalny and his supporters say the money-laundering allegation is ludicrous, and the funds involved are donations from the public.

The case was launched following a series of protests over the summer against the authorities’ decision to bar key opposition candidates from Moscow’s city council election.

The day after Mr Boyko’s successful data evacuation, his flat was raided again, in what activists say was revenge for his use of the drone.

“This time, it was heavy-handed, with everything confiscated – yesterday, according to Sergey Boyko, the investigators were ‘openly half-hearted”https://www.bbc.co.uk/”, a leading Navalny activist, Leonid Volkov, tweeted, adding that police appear to be have been smarting from the “humiliation” (link in Russian).